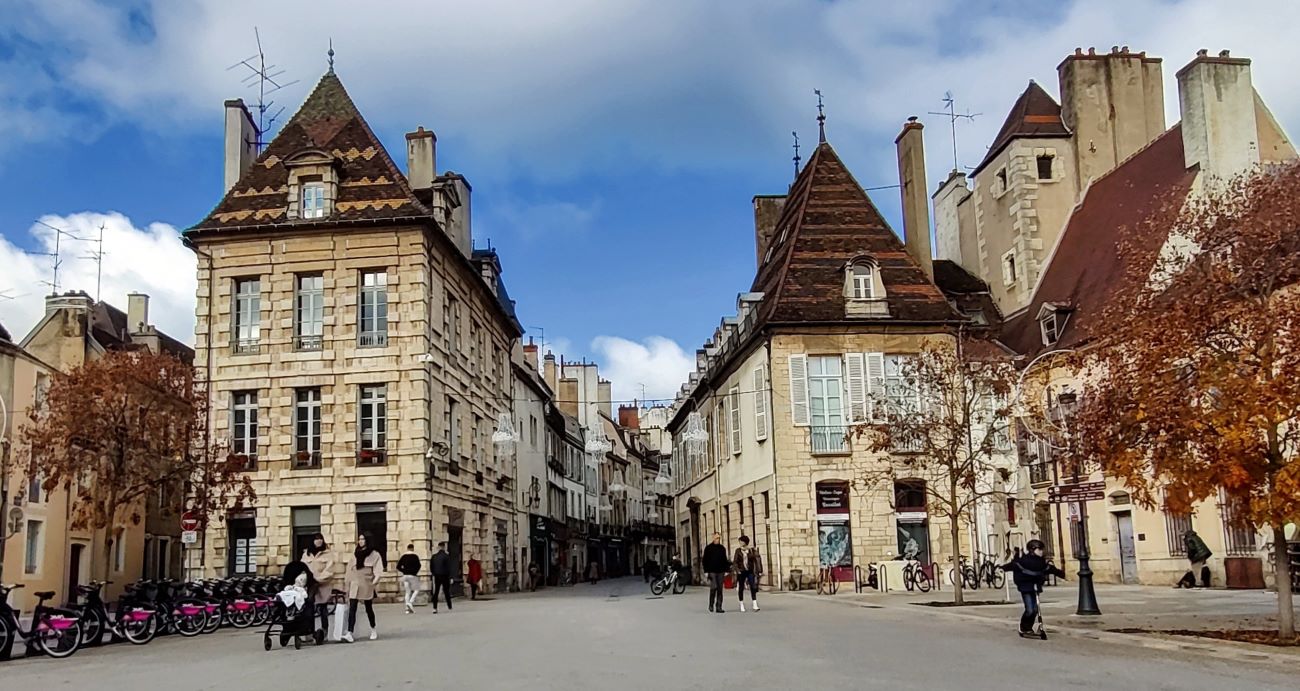 We selected Dijon because it was the right sized city for us– about 160,000 residents. During our one week stay we discovered we liked everything about this city. The beauty, the cleanliness, the ease of walking, the people, the services, the easy access to the city center from the train station, the culture, and the museums. Yes, this city has it all. It’s extremely livable. If I could speak French I’d never want to leave.

And to think it’s also the capitol of the region of Burgundy. Many people base in Dijon to travel the wine circuit which includes six wine routes in all directions. That kind of travel requires a car which we didn’t rent. Plus, we’ve done enough wine routes in Oregon, Washington, and California to last a lifetime. Still, we did spend one day in Beaune (link) because we couldn’t miss the very Capitol of Burgundy Wines.

Even the Recycling Bins are Stylish 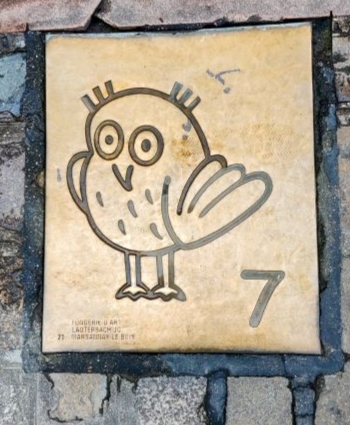 This cute owl welcomes you to Dijon

We walked everywhere in the city center – from early mornings to early evenings. Most of our walks had no destination. We just followed scores of beautiful streets. Sometimes our walks followed The Owl Trail (Le Parcours de la Chouette) which the tourist office created to showcase the historical sites. Why an owl, you ask? Apparently an owl was carved into the side of the Notre Dame Basilica and it became a token of good luck – only if you touch it with your left hand and make a wish! So many people have touched it over the centuries that the little owl no longer has a face. You have to accept on faith that the sculpture is an owl.

Now, the tourist center owl image is cute and adorns little bronze triangles along all four owl trails so you don’t have to look at a map. A guidebook purchased at the tourist office provided further explanations of key buildings erected between the 13th to the 19th century. I still can’t differentiate Romanesque from Gothic but I did learn that the beautiful glazed tile roof patterns date back to the 13th century.

The Musee Des Beaux-Arts in the Ducal Palace is one of France’s oldest museums. The museum has created the best audio guide we’ve ever seen. It’s an app, available on Google Play or Apple and you will find it under the name Nomade. In fact, they encourage you to download the app and view it before and after your visit in order to enrich your experience.

This audio guide is so good it set a new museum standard for us. We had just rented one at the citadel in Carcassonne France that we gave up on after the first room. We vowed we’d never rent another. But, this one was free and fantastic. Using the audio guide, we took two mornings to see the 1,500 works available in the museum. The tour begins with Egypt and then moves through the centuries with Medieval art in both Burgundy and Europe; the Renaissance in Italy, France and Europe; on through the 17th, 18th, 19th, and 20th centuries in Europe and around the world.

Francois Pompon dedicated his life’s work to sculpting animals. He didn’t become a recognized artist until the age of 67 when he exhibited a stylized polar bear sculpture that is now known around the world. Titled “the white bear” or “ours blanc”, the original marble bear is in the Musee d’Orsay in Paris. Even though Paris has the white bear, Monsieur Pompon was born in Burgundy and he donated over 300 of his works to the Musee Des Beau-Arts in Dijon.