Cycling and walking along the seashore, how nice.

By the close of November 2021 swelling numbers of Covid cases, a new onslaught of travel restrictions, and the imminent cancellation of our French Covid vaccine certificates chased us back into Spain.

Even though we no longer had a place we could call home in Mairena, our “official” Spanish residence was still registered there. We ended up making our way back to Andalusia for Covid booster shots because they are administered by the various autonomous communities in Spain. Along the way we spent most of the winter months along the Costa Blanca.

We spent December in Valencia, but this time in the seaside neighborhood of El Cabanyal. The main attraction for us was its undeveloped residential nature and the proximity of the Malvarosa and Patacona beaches. 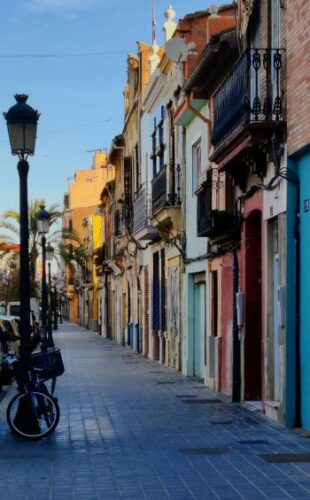 Our choice of a neighborhood away from the bustle of the city was a good one.  It reminded us of the time we spent in Mairena, quieter, slower pace, and more traditional than the time we lived in the heart of the city just a few kilometers away.

We enjoyed long walks along the promenade or on the beach every day. There are so many beach games, volleyball, gymnastics, hacky-sack like games and plenty more we didn’t recognize. All of them proved diverting.

When Christmas rolled around, it was especially nice to spend the day with our dear friends Mat and Kathryn for the fifth year in a row.   Then as the new year was in the offing, we decided to try a night at the circus.  That was an experience. Our first non-musical performance in Spanish.

January brought us to Alicante. The flat we rented was in Barrio de la Santa Cruz, a neighborhood of narrow streets and colorful houses.  Even though we both had mild cases of Covid during our month in Alicante, we recovered quickly and frequently made the steep climb from the barrio up to the medieval Castillo de Santa Bárbara to enjoy the  sweeping views of the Mediterranean coast.

The museums in Alicante were beautiful.

Alicante is host city for the start of the world’s toughest sailing competition –  32,000 nautical miles (nm) / 60,000 kilometers (km) around the world. The Ocean Race Museum  has interactive exhibits that cover the 45+ years of race history.  We’ve never been interested in extreme sailing until we visited this museum. Now we are counting the days to the start of the next race on January 15, 2023.

Another of our favorites is the archaeological museum, Museu Arqueològic d'Alacant,   The exhibitions and illustrations are just plain beautiful. We spent a couple hours wandering around.

Altea after dark was a real treat.

If January was museums and Covid recovery, then February in Altea was about daily seaside walks and the rocky beach.  Susan knew we were going to enjoy our February in Altea the minute we stepped onto the 9 km long promenade. 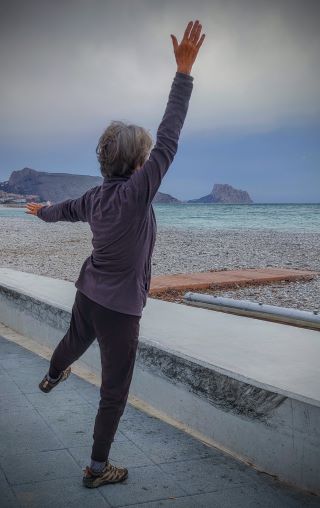 We spent a lot of time on the waterfront

Her expectations were upgraded when we dropped our bags at the  apartment and saw that our situation at the end of the promenade was next to an estuary full of birds. We enjoyed this constantly changing view from our 3rd floor balcony or from two comfy sofas separated by a coffee table. Just perfect for lounging.  Day one took us back to the promenade for a musician serenaded lunch that we would happily duplicate again and again during our stay.

We walked the beach and promenade daily as well as many well-marked countryside trails where fig orchards seemed to dominate.  After working so hard on our hill climbing in Alicante we didn’t want to lose that gain so we regularly took the steep stairs into the beautifully situated old town built high on the ridge.  Additionally, Parque Natural de la Serra Gelada at the southern end of the promenade included an uphill hike straight to the lighthouse and the ultimate high views of the Bay of Altea.

We would return to Altea in a heartbeat.  It’s an international community (they say 120 countries are represented) and easy for non-Spanish speakers to navigate.

We rounded out the beachside winter with a strange couple of weeks in Almuñécar that felt eerily empty during the off-season month of March.  We were staying in an apartment that has been in the family of our friend Emelia since she was a young girl. The building was large, a couple of wings with eight apartments on each floor.  Out of the 150-200 apartments, it felt like at most ten were occupied.  The hallways were long, windowless, and dark.  The lighting’s  motion sensors were slow and with their delay, regular visions of The Shining were inevitable.  Thankfully, workers were repainting the exterior and so at least they were around. 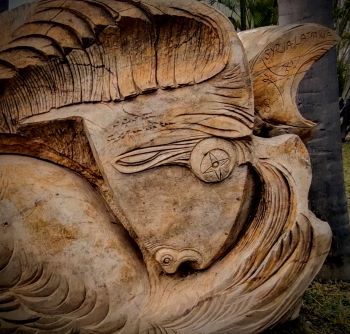 One of fifty sculpture by Syrian refugee artists.

Once outside, the beach was across the street. We generally shared the place with only a handful of other walkers.  The actual village of Almuñécar  was an easy walk from the monstrous holiday apartments.  Emelia, our friend, worked at an archeological dig one summer when she was 16 years old, so we had to check out that location and the accompanying museum.  We also found a mesmerizing botanical garden with about 50 stone sculptures created by Syrian refugees in 2005.

Thinking it would be so much easier to navigate the medical clinic in a small town than it would be in Granda, we stopped in to see if we could get a  Covid booster.  Fifteen minutes later we walked out with the vaccines that would allow us to leave Spain and travel throughout Europe.

That was a bigger deal than you would think. As registered residents, Granada province was the only place we could get the jabs.  So, it was then or never.

Winter of 2021-2022 wasn’t completely about coastal stays. We spent a bit of time in Córdoba and returned to Granada where we had appreciated its peacefulness in a time of Covid.

During this stop in Granada, we ended up saying goodby to Teej, our last cat companion, who at the age of 21 finally set aside the burdens of this world.  It is always hard to lose someone you love, but Teej’s passing wasn’t unexpected.  It was eased with the help of a gentle and compassionate veterinarian and thus much easier to accept.  But gosh he was one wonderful friend.

We lingered  in Granada over La Semana Santa and Easter to care for our friends Emi and Benjamin’s cats while they visited friends in London. With the coming of Spring, travel restrictions are easing all across Europe and it is time to move on again.  We are heading back  to Valencia to change out our winter kit for summer kit and then on to France.

Charity Shops are in every city in the U.K. lined up along the high streets making comparison shopping quite easy.…

A Budget Friendly Trip on the Rhine and Mosel Rivers

The savings in building your own trip are meaningful. Instead of spending $2,500 per person on a seven-day cruise (plus…