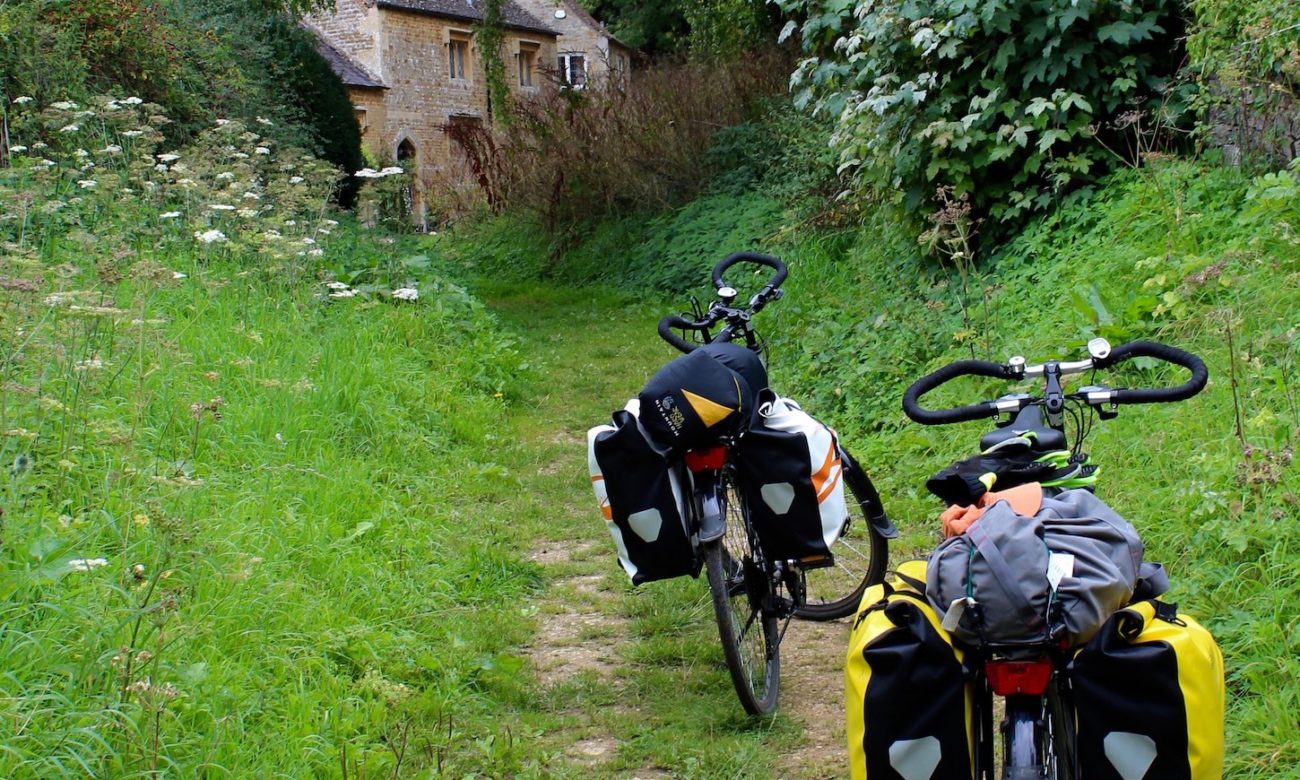 When Jamie suggested a cycling vacation in England, I thought, “I’ll finally see the Cotswolds.”   Year after year I'd add “Hiking in the Cotswold Hills” to my Twenty-five Things list.   The list I write out every January to focus my goals.   But my Cotswold trek never made the cut – even after 18 appearances.

As our plans progressed, I came to realize that whether hiking or biking, our exploration of the Cotswold Hills would be limited and it would miss the busy tourist hot spots.    Until we arrived in Adlestrop, I didn’t know what a blessing that would be.


Tiny Adlestrop is caught in a time warp. It’s not on a main road. There are no highways. No train has stopped in Adlestrop since 1966.

It was our second day in England. Pedaling along National Cycle Route 442 took us from peaceful country lanes to what we at first mistook for the driveway of a handsome 19th century stone house.  The small yellow way marker convinced us that we were supposed to open that gate and cross that pasture, and overcome that feeling we were trespassing.  On reaching the far side of the field, we arrived at an overgrown bridle path delineated by a dry stack stonewall.  We rode on until our heavily loaded bikes became mired in the mud.  After all, we were cycling in early September following the wettest August in living memory.

The whole experience -- country lane to pasture to bridle path to pushing our bikes – gradually decompressed my typical 21st century urgency. And as I pushed my bike to the end of the bridal path, I finally was ready for the gentle pace of times past. 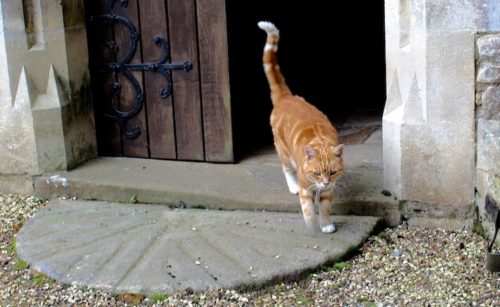 The feline Sexton Welcomed Us into the church

On the narrowest of narrow lanes, we weren’t quite sure we were anywhere in particular.  But there on the right a manicured topiary cross beckoned us to explore the grounds of the 18th century Church of St. Mary Magdalene.

An orange tabby cat boldly greeted us from within the church as though there was nothing unusual about a feline sexton. Across from the church, a pair of Cocker Spaniels added their greeting and warned us the Rectory was off limits as far as they were concerned. When we noticed the lane continued downhill into a village, we finally realized we’d stumbled into tiny Adlestrop -- through the back door.

I was ready to breathe in the full charms of the village as though I was Jane Austen herself.

This was the Cotswolds I’d always imagined.

Riding down Main Street, we stopped at the post office – it wasn’t open but I read a poster about Victoria Huxley, an author living in Adlestrop. It turns out I really was in Jane Austen land. Ms. Huxley documented the Jane Austen connection to Adlestrop in her book, Jane Austen & Adlestrop, Her Other Family.

According to Ms. Huxley, Jane Austen first came to Adlestrop in 1794 when she was just nineteen. Jane’s maternal grandfather, Thomas Leigh, was born there in 1696 and the Austen’s kept a strong connection with the Leigh family. Visits over the years helped form characters and settings for Jane’s novels with a strong correlation between Adlestrop and the novel Mansfield Park.

Our tour of Adlestrop complete, I was ready to pass in wonderment through more tiny villages off the tourist thoroughfares, never mentioned in the guide books.  The unexpected Cotswolds were everything I expected.

Cycling the Cotswold Line is a great way for gentle cyclists to explore the distinctive stone walls, historic villages, and…

We Stumble into Adlestrop – Through the Back Door

Combine Bikes and Trains for Gentle Cycling in England

By combining bikes and trains, gentle cyclists can explore parts of the UK that are beyond their cycling range.  But…