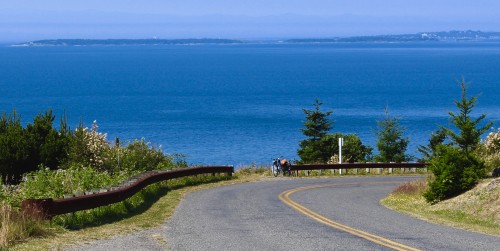 Quiet coastal roads and moderate climbs await the gentle cyclist on Washington's San Juan Islands.  They are a great place to get started on independent cycle touring.  Base your tour from one island and take advantage of the free ferry rides between islands.

One July week a few years ago, Susan and I eased into cycle touring.  We didn’t realize it at the time, but the five nights we camped on Lopez Island and the days we spent exploring the back roads and beaches, shops and farms of the archipelago marked the beginning of our fascination with self supported cycle touring.  Maybe it isn’t even fair to call it cycle touring.  We set up our base camp just three miles from the ferry terminal at the only campground with showers on Lopez, and never moved our base.

Awakening to a glorious birdsong choral one morning and the basso profundo bellowing of fog horns the next, typifies the delightful contrasts of island cycling in the Puget Sound.

Each morning after that we packed a lunch, filled our water bottles, and just hopped on our bikes and rode off.  We spent our first days exploring Lopez. Other days we peddled back to the terminal, picked a ferry and sailed off to explore a new island.  Early starts and long summer days gave us plenty of time for leisurely circuit rides on San Juan, Lopez, and Shaw with ample opportunities to enjoy the beaches and shops. 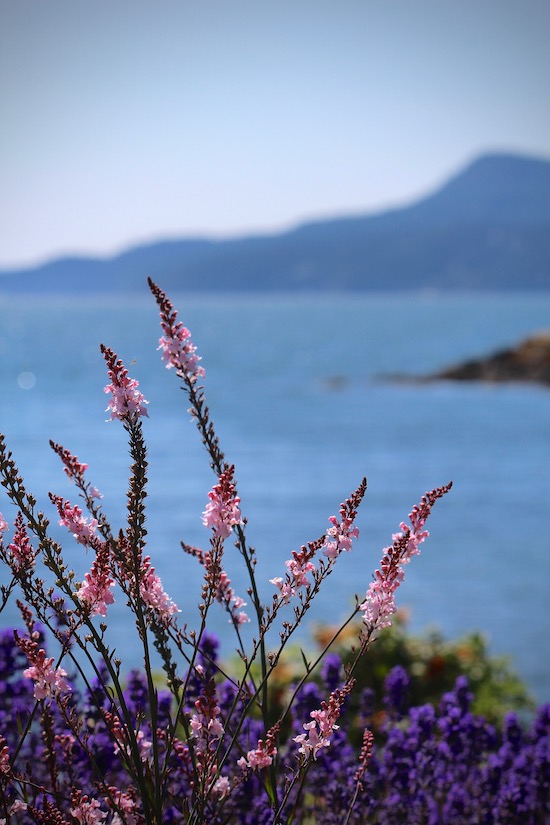 Route planning wasn’t a challenge either.  There aren’t many options so it pretty much came down to just pick a place, then go.  You can’t really get lost.  If you do get a little turned around, you’ll never be more than a mile or so off route.

Lopez Island is ideal for the gentle cyclist, its people are village-friendly.  Stay off the center Road bisecting the island to enjoy quiet lanes rarely troubled by passing vehicles.  The hills are easily handled too.

And what a nice environment you’ll ride through.  In July, the golden hayfields bounded and accented in the deep greens of firs and pines reminded us of Oregon’s Willamette Valley.  But the sparkling blue fringe at the horizon kept us anticipating the next beach.

A necklace of parks on the island’s perimeter welcome gentle cyclists for a picnic or a quiet afternoon’s pause.  We particularly enjoyed Spencer Spit State Park.  Midweek we were just about the only visitors.

Then there’s the view south across the Sound to the Olympic Peninsula and Hurricane Ridge. All that snow, the steep mountains -- just stopped us in our tracks. We felt like we were riding in Switzerland, except for, you know,  no climbing, yodeling, cowbells. Well, okay, it didn’t feel like Switzerland at all.

We enjoyed Lopez Island so much we spent more time there than we planned. One of us figures she’d like to settle there. That is if we don’t end up in England’s Somerset County.

The ferry for San Juan Island stops at Friday Harbor, the only incorporated town, and busiest place we encountered.  With Roche Harbor on the opposite side of the island, you have the services and outlets typical of high tourist to resident settlements -- galleries, boutiques, cafes, bars and restaurants.

People watching opportunities abound with all the comings and goings at both harbors.  Gentle cyclists will be interested in the 30 to 40 miles of road that are slightly more challenging and rather busier than those encountered on Lopez and Shaw but offer more concrete destinations.

We stopped and browsed the gift shops of alpaca and lavender farms.  On a brief layover at San Juan Island National Historic Park we learned of a peculiar episode of mid 19th century brinkmanship in which the United States and England nearly went to war over the murder of a pig.  At Lime Kiln State Park we watched for whales and settled for an enchanting hour or so of wind, waves, and a soft-focus blue on blue horizon that teased our imaginations.

On the approach to Roche Harbor, a 19 acre sculpture park distracted and entertained us before we stopped for a late lunch.  The sculpture stop was worth it, Roche Harbor wasn’t. 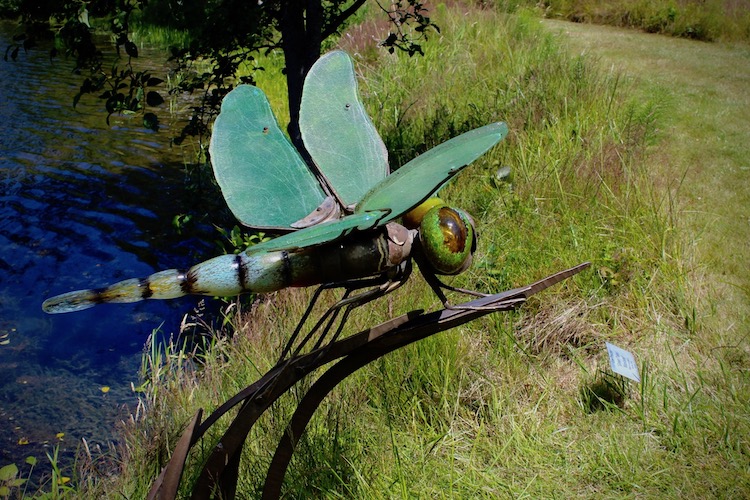 The sculpture park near Roche Harbor is a nice opportunity to take a break.

We still had plenty of time to enjoy a snack and a pint in Friday Harbor and make it back to our camp on Lopez before dusk.

Tiny Shaw Island doesn’t show up on “places to visit” lists.  There isn’t much there.  And that’s why it’s worth a morning’s visit.

At about 7.5 square miles, it’s the smallest of the San Juan Islands with ferry service.  Just a few minutes from Orcas or Lopez, depending on the ferry, it won’t take long to get over to Shaw.

Plan to hit the island first thing in the morning, cover the 15 or so miles of road on an slow-paced traffic-free ride and you'll still have plenty of time to spend the afternoon on the beach at Shaw Island County Park.

Even if the ferry is due any minute, gentle cyclists will have plenty of time to visit Shaw General Store, the one and only commercial establishment on the island, at the end of their ride.

For novice cyclists Orcas Island is in a different league.  Gentle cyclists may prefer to avoid the narrow roads and steeper grades on this island to enjoy some of the other activities on the island.  As beginner cycle tourists, we elected to skip cycling on Orcas.

There are three campgrounds on Lopez Island that are within five miles of the ferry terminal.

We Stumble into Adlestrop – Through the Back Door

When Jamie suggested a cycling vacation in England, I thought, “I’ll finally see the Cotswolds.”   Year after year I’d add…

Cycling Through History Along the Kennet and Avon Canal

Cycling through Wiltshire, whether along the Kennet and Avon Canal or on quiet country lanes, is a delight for the…

My friend Christina’s love of Ferrara, her home city, inspired me to put together a gentle cycle tour. Along our…