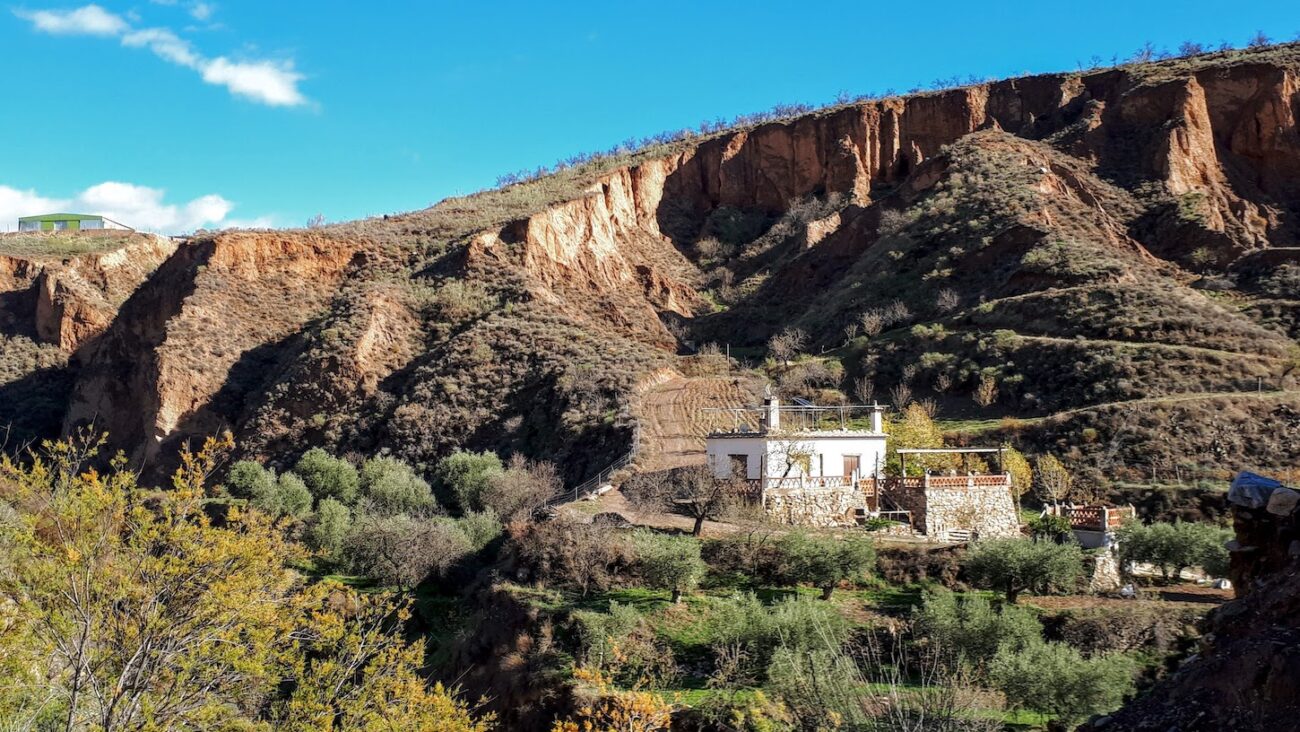 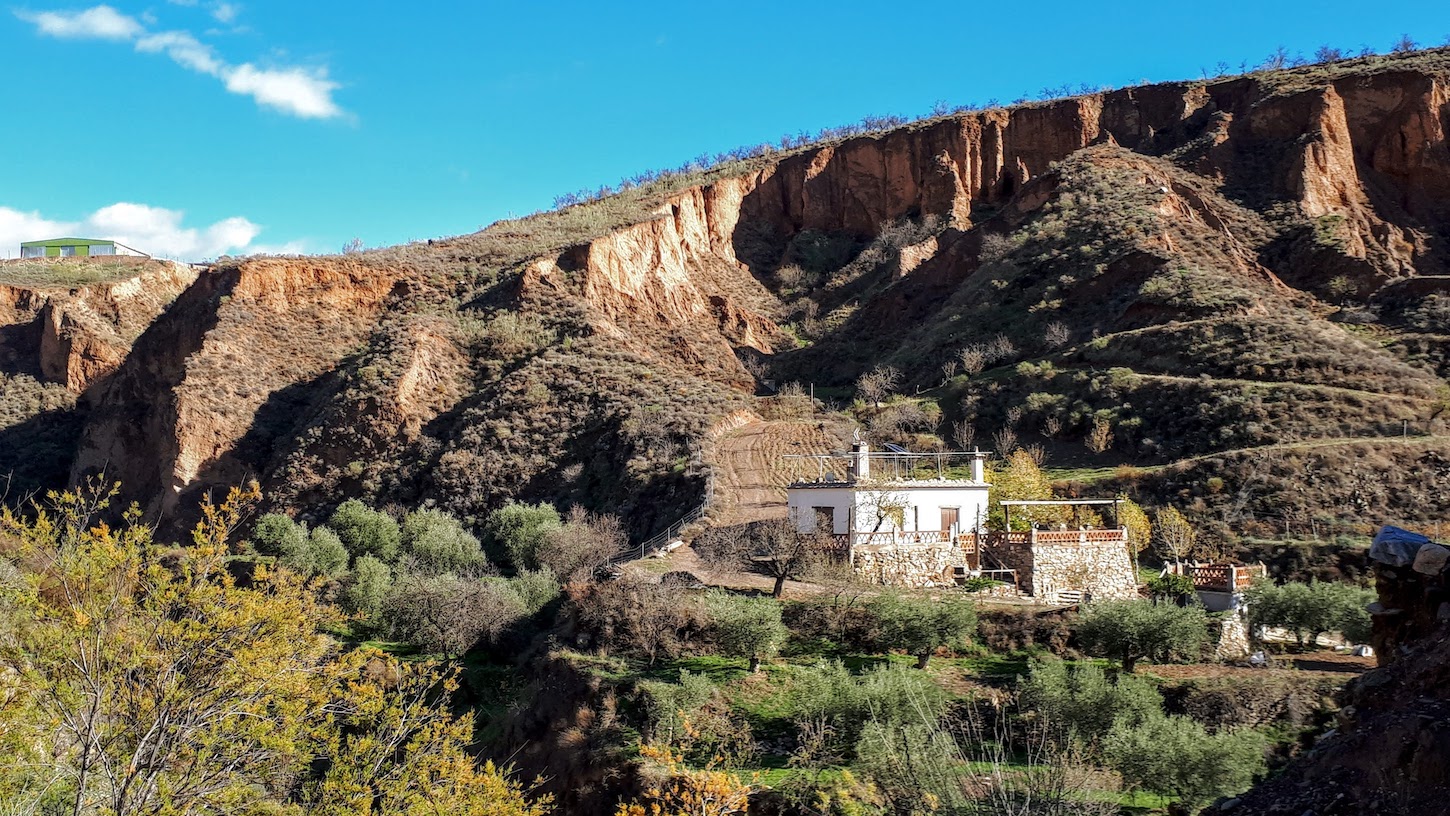 Every morning while Susan and I are sipping coffee and waiting for sunrise, the street lights of the white villages beckon us from the coastal mountain range across the valley.  The largest village, in the U.S. we’d call it a town, lies not on the mountains but down in the valley.  Its name, Ugíjar, is a hard one to pronounce.  We’ve been here six weeks.  Still takes two or three tries to get it right.

With its population of about 2000 Ugíjar is ten times the size of Mairena.  The relative abundance of cafés, there must be at least nine, and well stocked grocery shelves are a constant temptation.  But, it’s nearly five miles away by foot, which is a helluva walk for a pizza. 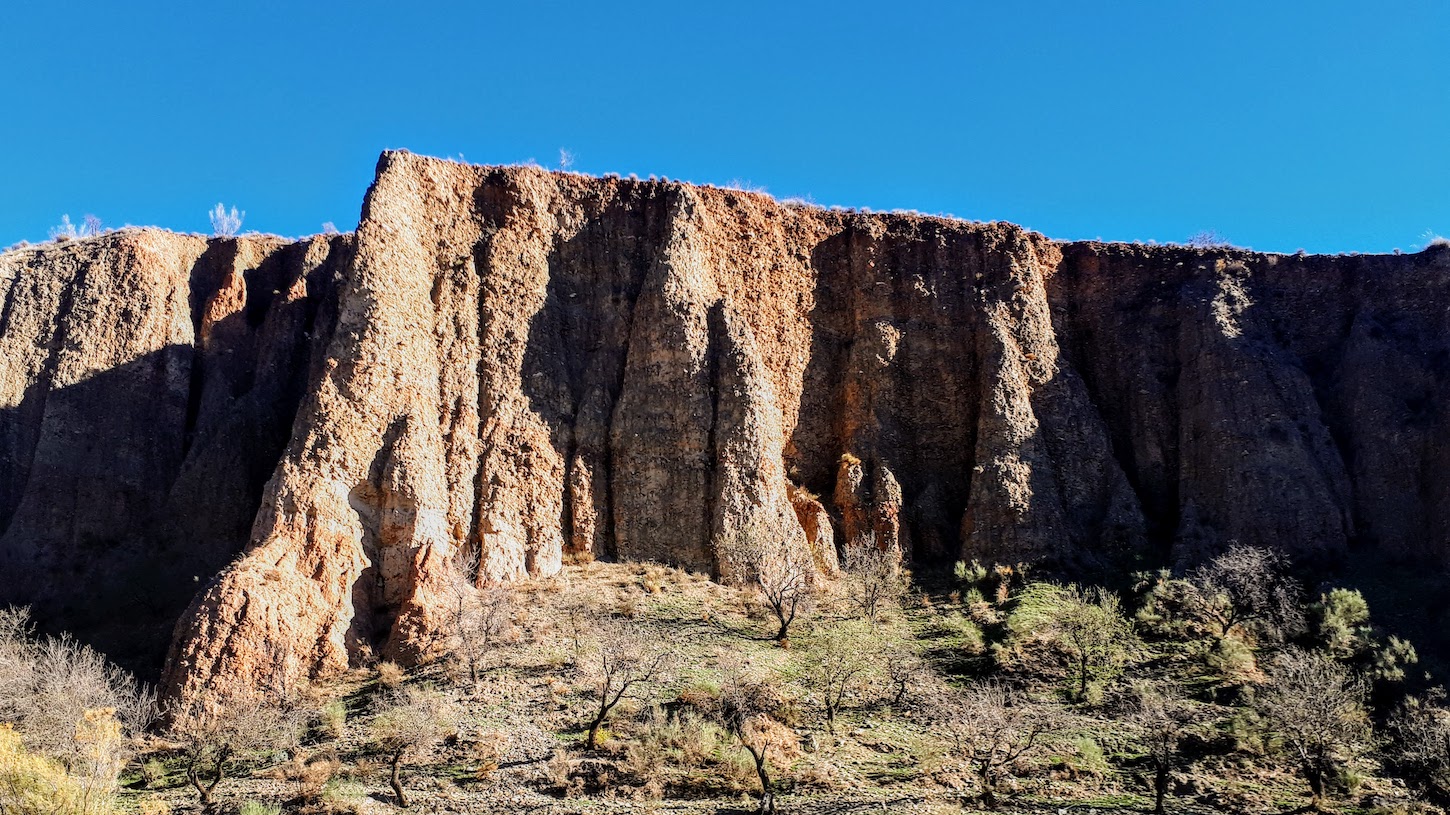 Nevertheless, the urge to splurge (and the availability of Italian coffee) has induced us to make our way along the old donkey paths and ancient roads to our local metropolis.
I should explain, it isn’t as though we could drop a stone from our terrace down on Ugíjar- not even close.  But making our way down there calls for a couple of long steep descents through deeply incised but very narrow barrancos or ravines and crossing through a beautifully eroded section of badlands.

Crossing the badlands calls for a good deal of getting back out of the barrancos we’d just skittered down.  I imagine that whomever coined the expression, “Two steps forward, one step back,” had this route in mind. 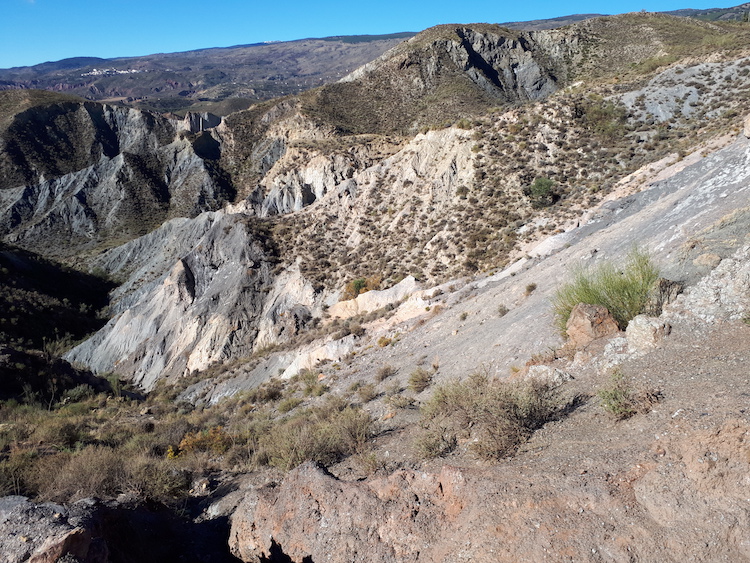 Now I don’t want you thinking that I’m whining.  Susan and I walk because we enjoy it.  We’ve discovered a couple of places along our walks here in the Alpujarra that are simply sublime.  There isn’t a stitch of what Americans would call wilderness.  The land has been occupied by humans and our ancestors since at least the Paleolithic.  But there is one spot along our route to Ugíjar where the lone skeleton of an ancient olive tree stands in profile between the red earth and azure sky.  The wind is fresh and that’s the only sound.  We stand alone together, Susan and I.  We watch a while.  The moment passes and we walk on.

We pass a couple of cortijos, ramshackle farmhouses alone out there, usually on a hill.  Mr. Big Ears lives at one of them.

Like every country dog we’ve met in Spain, Señor Orejas Grandes is dedicated to announcing the passage of every walker.  And like every free ranging dog we’ve met in Spain (save one and I have the scar to prove it — but that’s a another story), Mr. Big Ears keeps at a certain distance as he announces us.  A stone’s throw, I’m guessing.

We met this little black and white mixed breed about the size of a Jack Russell on our first walk to Ugíjar.  Of course we met him again on the way home, and then again a handful of minutes later.

We’d stopped to peel a couple of oranges and finish off the end of our water before tackling the last and steepest uphill stint to home, when along came our little buddy accompanied by his person.

Andalusians have a dramatically different accent than Valencians, not to mention the accent of Galicia, but that’s also another other story.  So anyway, the gentleman with his dog stopped to speak with us.  Andalusians are friendly that way.  I never did catch his name, but we learned of his time in Germany, his struggle with diabetes, and his age (81). 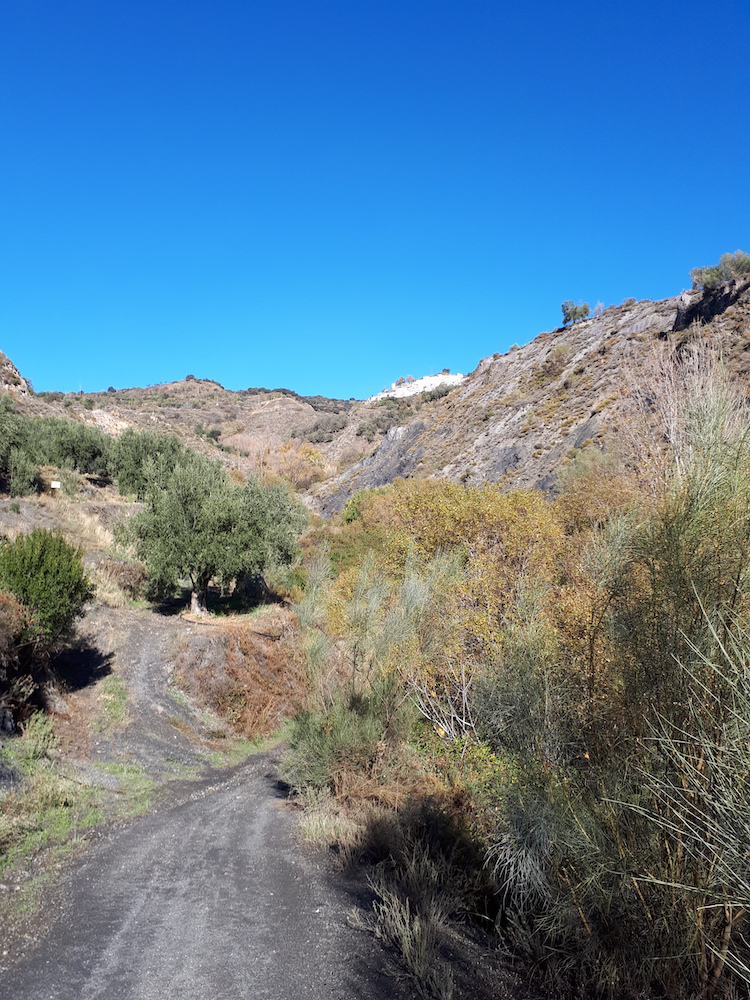 There's a big old barranco hiding up ahead

It was a struggle with our American accented, virtually incomprehensible Spanish and our interlocutor’s predilection to imagine we understood German.  After a few pleasant minutes, our new friend gave us a cheerful Auf Wiedersehen, collected up his little dog with the outsized ears and set off to chop saplings with the pruning hatchet he was carrying.

We continued on our way too.

The heartbreaking thing about the last half mile or so before reaching home from Ugíjar is that we’ve already gotten almost level with our casita.  And then down we go into the final barranco. We’re tired.  The backpacks full of oh, I don’t know, cat food, and Italian roasted coffee, and peanuts along with other “essentials” unavailable in Mairena are pretty darned heavy despite the empty water bottles.  And it’s going to take 30 minutes to make that last climb with our hearts pounding in our ears.

Feels like those last couple years before retirement.  The last of our donkey years, nose to the grind stone years.  And those last steep, steep 50 meters up into Mairena are the hardest.

But you know, Mairena is only halfway up the south slope of the Sierra Nevada.  And that got me thinking about how the first three years of our retirement have been like resting in Mairena before we finish climbing the rest of the mountain.

We are so lucky, Susan and I, that we have our sites set on the same mountain and we’ll be climbing it together.  (I hope). 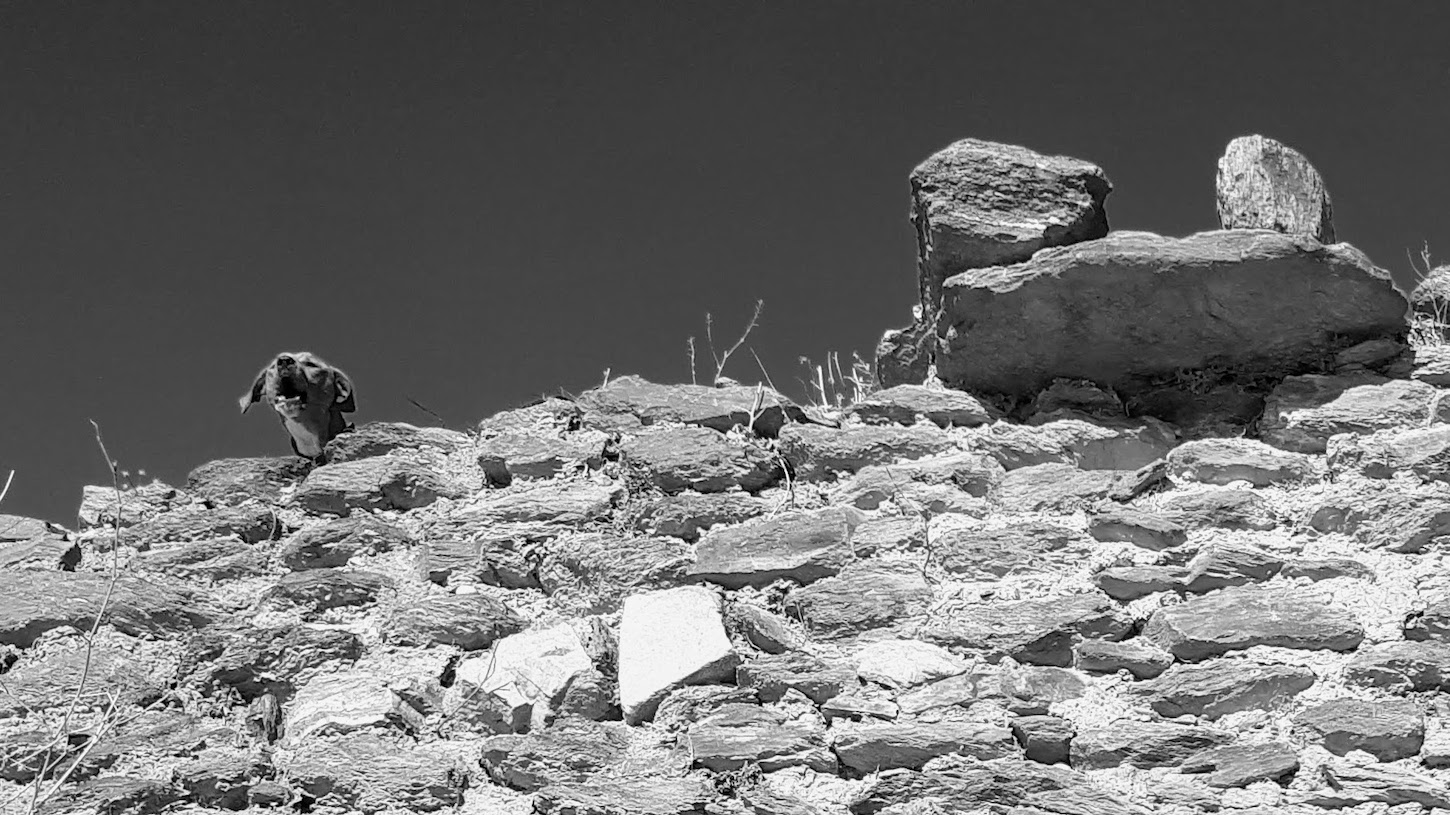