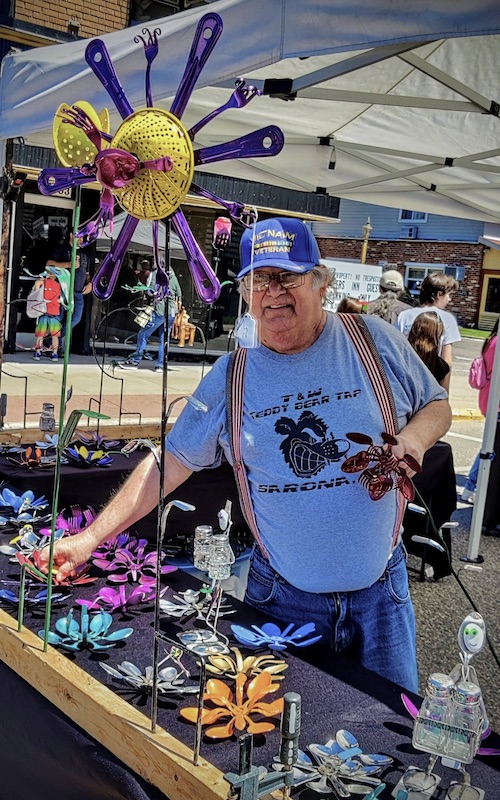 A small town in a land o' lakes

As I learn more and more about the Land O’ Lakes in northern Wisconsin, Michigan, and Minnesota, I am absolutely gobsmacked.  I guess I never gave a thought to where that Land O’ Lakes butter came from (Minnesota, in case you don’t know).

We landed in a luscious place in Vilas County, Wisconsin - a county with 563 named lakes and 757 unnamed lakes.  There’s even a city named Land O’ Lakes in this county.  We’re not there, however.  We’re on Anvil Lake, about 230 acres of sandy bottom lake surrounded by flourishing forest lands.

Jamie’s sister, Jill, and her husband, Bob, just purchased a property on Anvil Lake this past spring.  We are fortunate to be one of their first guests and to be an extra pair or two of hands for all the essential tasks required of a nine acre, two cabin property.

With a pontoon boat, kayaks, a beautiful swimming beach, bonfires, and cook-outs, there is plenty to enjoy about lake living.  Jamie and I also appreciate the off-lake activities like a walk in the woods and poking around in the small towns.

Fortunately, for us, the cutest small town is also the closest one - about 15 minutes away.  If we just need something small we can go to the nearby gas station/convenience store that we call the BBB because of the marquee that reads Beer, Booze and Bait!

But, Eagle River, with a population of 1,400, has some of the friendliest people we’ve ever met.  What’s really lovely about this town is the predominance of privately owned, unique businesses. Even the tchotchke shops are endearing.

A ladies clothing stored called Cotton + Birch Collective also has some exquisite home textiles.  The owners of this store executed their vision beautifully and I only wish I had room in my one suitcase.

I also want to find room in my suitcase for products from the Farmer’s Market on Sundays and Wednesdays and the Arts and Craft shows scattered throughout the summer. 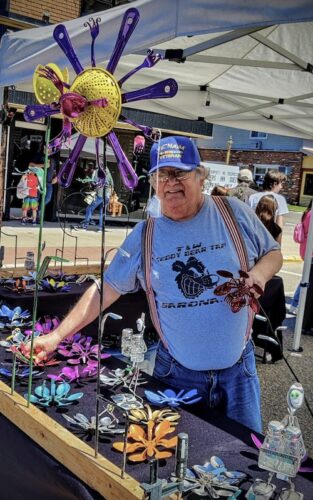 We found a decent number of restaurants in town.  Sadly none cater to our plant based diet.  For drinks we’ve enjoyed Tribute Brewing,  Buckshots Downtown Bar and Deli (a daytime “bar”with live musical entertainment),  and The Craftsman American Tavern  featuring craft brews from the surrounding area.

Water is really the heart of this little town that sits on the banks of the Eagle River and connects to the world’s largest freshwater chain of 28 lakes.  Summer sports take center stage on the lakes and keep the area prosperous.  Winters are brutal here but things don’t close down.  No Siree.

Eagle River entrepreneurs registered the city as the Snowmobile Capital of the World in 1964.  They hold the world championship snowmobile derby  in January each year.  I sure hope the spectators know how to dress for this event. In addition the city holds the USA Adult Pond Hockey Championship  every February and houses the Wisconsin Hockey Hall of Fame.

Eagle River and Vilas County are full of private lake homes, resorts, and services that cater to a lifestyle of boating, hunting, fishing, snowmobiling, ice fishing, camping, cycling, hiking, and lounging on pontoon rafts in the middle of the lake.

Tourism has been center stage in the area since the 1920s.  The Eagle Waters Golf Club was built in 1917 and the Chanticleer Inn  came into being in 1922.  Even the Eagle River Sports Arena dates back to 1932.

Two historic buildings house the Eagle River Historical Society.  The Railroad Depot was built in 1924 after the original 1884 depot burned down.  It showcases the history of downtown life including how 27 saloons served the loggers who were engaged in clearcutting the old growth forests.  There were only 672 people living in Eagle River in 1920 when the saloon business “dried up” with the coming of prohibition.

The Depot Museum includes original fixtures from Eagle River’s first ice cream parlor.  It was set up in 1919 by a saloon owner for his two daughters who ended up operating Schlack’s Ice Cream Parlor until 1970. 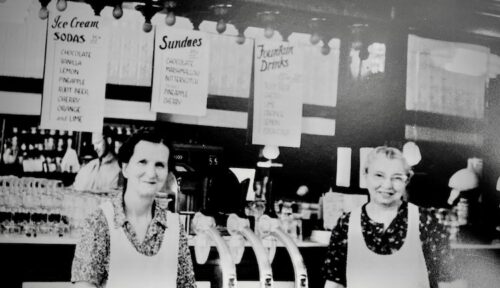 They were on to a good thing because the ice cream parlor became the place to see and be seen.  And nationwide ice cream consumption increased by 55 percent between the years of 1916 and 1925 even though the population only increased 15 percent.  Both the Anheuser-Busch and Yuengling breweries converted their operations to making ice cream during prohibition.

Don’t feel bad about the Schlack sisters’ father.  He re-opened his saloon right next door as soon as prohibition was repealed in 1933, about the time Anheuser-Busch and Yuengling switched back to brewing beer.

By the way, if you’ve never heard of Yuengling Brewery,  don’t feel bad.  Neither had I.  Founded in Pennsylvania in 1829, it is the oldest operating brewing company in America beating Anheuser-Busch by 23 years.

I also learned that local teachers (all unmarried females paid $75/month in 1923) had strict conditions placed on their deportment.  They were not permitted to “loiter” in an ice cream parlor.  At least it was someplace they could order and eat an ice cream cone before their 8 pm curfew.

The other historic museum building is a beautiful place that began life as a lakeside recreation hall for a local boys camp back in the 1940’s.  When that property was purchased in 1969, the building was moved to Eagle River and used as a social hall for the Knights of Columbus. 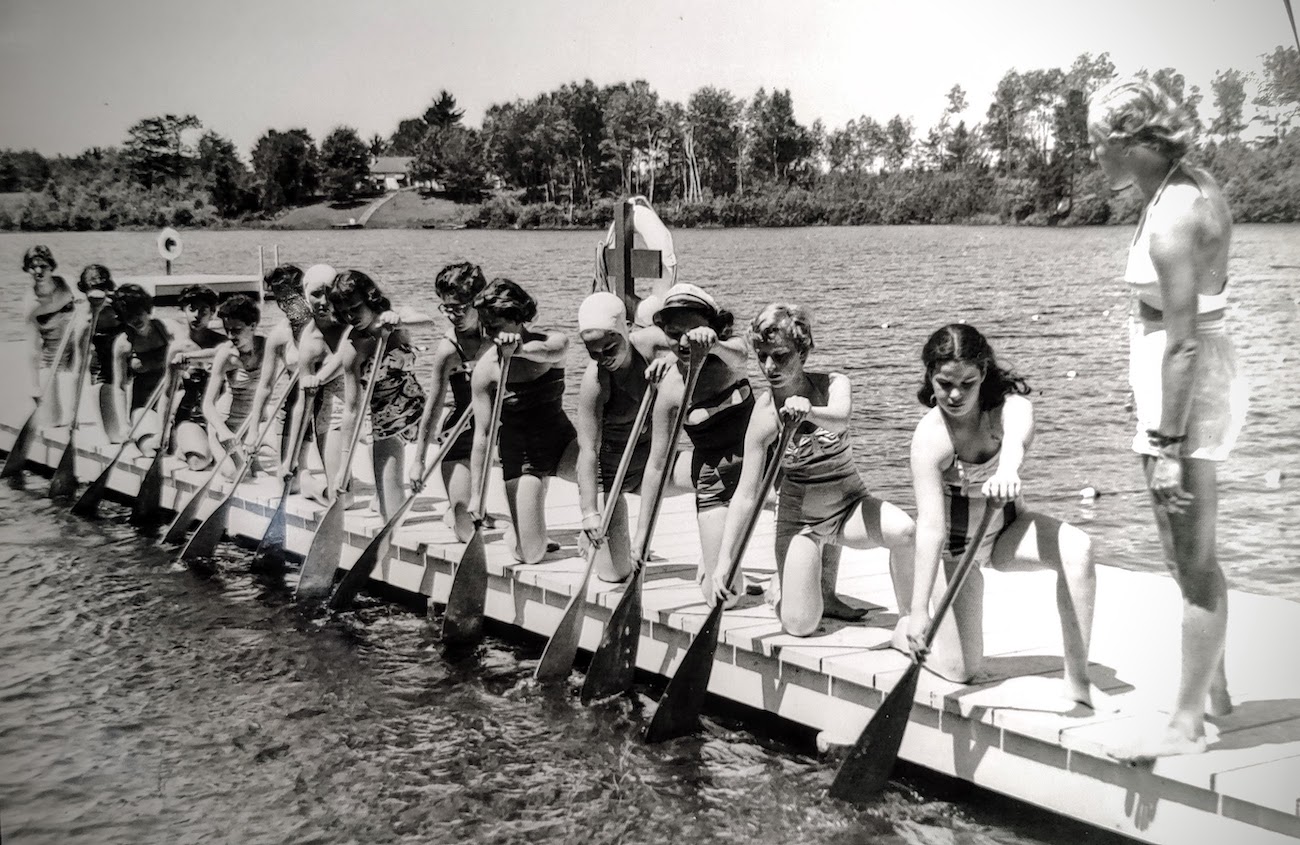 The building became a part of the historical society in 2014.  It includes photos and memorabilia about the plethora of children’s summer camps.   Allan Sherman, who along with Lou Busch wrote the famous 1963 song called Hello Mudder, Hello Fadder (A Letter from Camp), attended Camp Ojibwa in Eagle River when he was a boy.

In the museum and on the Society’s website  are profiles of the people responsible for Eagle River city development that began in the 1880’s.

Finn Lawler is considered the grandfather of Eagle River and was instrumental in growth, industry, and development through various government roles.  A multi-faceted chap, he was a surveyor, timber salesman, assessor, town and county clerk, school clerk, developer of the Vitas County abstract, and bank founder/president.  Every town small and large has a Finn Lawler in their history or at least a composite of him.

Every town also has a George Frederick Sanborn who stood out for not being so prestigious.  He was a lawyer and District Attorney before entering the timber industry with his brother.  They specialized in purchasing lands that had already been logged for the cost of back taxes.  Then, they hid them from the tax records by transferring them among their many shell companies.  It wasn’t illegal to do so back then.

Here’s where I give the Eagle River Historical Society extra points for disclosing reality.  To sell these lands at a profit the Sanborn Brothers employed a Croation immigrant to pedal these parcels in Midwestern immigrant communities.  The “farmland” was sold at reasonable prices sight-unseen.  The poor buyer arrived only to discover the clearcut plots were full of stumps that would take years of back-breaking work to remove and even then the soil was only suitable for potatoes.  Just another example of the land of opportunity being exploited by the opportunistic.

As we round the corner into the Independence Day holiday, we plan to participate in the boat parade on the lake, take in the Eagle River 4th of July parade and art fair, and watch a water ski show.  In the meantime, we continue our kayaking practice.  Our goal is to explore all of the bays and coves of Anvil lake.

Three Weeks in the Austrian Alps

There is something about mountains that stirs one’s soul. I doubt we will ever forget the three weeks we spent…

Coming Around to Gentle Yoga (Again)

I’m ready to learn more senior-safe yoga. Susan is ready to guide me. The best part is that as we…