Our visa renewal was a doozy

Our third year as Spanish residents ended in September of 2020.  Just as we did with our last visa renewal, we started in July to get our submission done before the August holidays shut things down tight.  We’d been through this drill before and anticipated a September approval, new identity cards a couple of weeks later and two more years of legal resident status.

Like last time we decided to enlist the help of our friendly relocation expert, Linda Svilane of YES Valencia.

At first we tried to submit our paperwork online.  After many file loading failures (they want every page of your passport, even empty pages, but that exceeds the allowed file size), we gave up and went the traditional in-person route.  By then, the first appointment available was August 5.

In hindsight, that should have told us things would be different this time around.  We met Linda at the nearly empty (due to Covid) government office and successfully submitted our application materials.  They scanned all the documents and returned the originals to us.  It took no more than 10 or 15 minutes.

I thought, great! Maybe Covid-19 won’t be a stumbling block.  That was my last sunny expectation.

We began checking our application status on the government website daily beginning the last week of August.  That proved to be a bit optimistic as the daily checking continued into September and throughout October.  We grew more than a little antsy as our status stubbornly remained “In Progress.”  Finally, on October 28 we received email notification of our Approval. Hooray.

So, we were approved but we still weren’t done. We needed an appointment with the Policia Nacional to obtain new identity cards and couldn’t get that darn appointment. Plus, we were trying to accomplish this process before we moved on October 30.

Because of the delay we had to complete the process in a new province - Andalucia. Moving to Andalucia meant we wouldn’t be able to lean on Linda from YES Valencia.

It also meant we needed to add a step. I’ll call this Step 1b. Because we changed our address after submitting our visa renewal paperwork we needed a new Padron de Habitantes, commonly known as just the “Padrón.” Residents obtain this by registering their official address with the town hall.

Once we had our visa approval letter (which had to be forwarded from our last address), the proprietors of Las Chimeneas allowed us to use the hotel address and helped us register at the municipal office in Mairena.

With the Padrón in hand we were ready to make an appointment at the National Police headquarters in Granada to update our TIE or national identity card.

Step 2 is harder than Step 1

If you recall, Jamie was searching for this same appointment back in the Valencia province. Now he’s searching the website daily for an appointment in the Granada province. After a month of searching, at five o’clock in the morning on December 30th three appointments popped up, one each on March third, fourth, and fifth. Even though we would have to make back-to-back trips to Granada, he grabbed the appointments on the third and fourth.

A side note about appointments:

We’re still in the dark about why visa processing has been in molasses in January mode.  Clearly, the government offices aren’t working at full strength.  Some people say Brexit related applications overflowed the system.  There are almost 200,000 long-term UK residents in Spain and many needed to take action on their status by December 31, 2020.  That certainly would contribute to the glut.

We also know that people grab more than one appointment for themselves in case they have to re-do something and come back the next day or next week.  If all goes well at their first appointment, they can always cancel the subsequent ones.  This is partly why it’s important to check every single day for appointments.  It's also why getting an appointment is like finding gold.

In January and February we filled out the forms, gathered our other paperwork, paid the fee at a bank in Ugíjar (there is no bank in Mairena) and waited another month.

Early in the morning on the day of our appointment, we each checked and rechecked that we had the required documents and copies of the documents.  And then to play it safe we decided to bring all the paperwork we submitted back in August to the appointment, just in case.

We left Mairena at 7 a.m. We were that anxious. It gave us time for breakfast, new visa-sized photos, and a little grocery shopping.

Jamie was up first up with an 11:30 appointment.  Still fretting, he decided to show up thirty minutes early.  The police officer at the door turned him away with directions to arrive only five minutes in advance.  He returned at the appointed time and ended up waiting another 45 minutes.

The following day my appointment was right on schedule.  I walked up five minutes before, was ushered inside, helped to register my presence by the policeman responsible for the X-ray screening and waited only a few minutes.

We had slightly different experiences with the staff.  Jamie’s paperwork was accepted as is and they took two visa photos from him.  I was only asked for one photo.  My agent, holding my old identity card in her hand, asked me to produce a photocopy of the card.  Now, the instructions said nothing about bringing a photocopy of this particular document.  Jamie didn’t have to produce a photocopy.  But my agent wanted one and she wasn’t going to walk across the room and make one on her copier.  This is where bringing my portable file cabinet with me paid off.  I handed her a photocopy and passed her test.

Next it was fingerprint time.  This is always a problem for me and it gets worse every year as my prints get lighter.  I was given special gel -- no luck.  Then asked to rub my fingers on my forehead -- still nothing.   Finally, I was passed off to another agent to see if his machine was more sensitive  -- nope.

Fingerprints are embedded into the ID card, the agent cannot move on until the machine accepts a quality print of at least one finger.   This was turning out to be a problem. 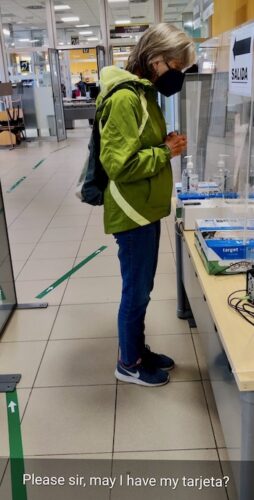 And maybe that's what did it because I was eventually shuffled back to stand in front of the original agent.  As I watched her start stamping my papers my blood pressure dropped 20 points.

We had to return to Granada to pick up our new identity cards.  Jamie was directed to make an appointment no sooner than 40 days.  My paperwork said one month - YIKES, two different instructions from the same office.

We didn’t have to worry about whether we waited 30 days or 40 days.  Jamie was back on the computer the next day to secure appointments to pick up our new identity cards.  That was March 5th.  The first available appointment was April 19.

We did get two appointments on the same day.  Three minutes apart.  That was nice.

The pick-up was so smooth I feel like I’m still in a dream as I write this.  We were eight minutes early and ushered right in the building.  I thought I’d have to go through the whole fingerprint rigamarole again so a friend suggested I use lip balm on my finger to make my fingerprints stand out more.  I  was prepared.  I loaded a tissue with lip balm and tucked it in my pocket.  Then, they didn’t even ask for my fingerprints.  Maybe my file was noted, “This woman has no fingerprints.”

It turns out Jamie could have benefited from my lip balm loaded tissue.  It took them three tries on each finger before they were satisfied that he was a match.

Really, it didn't take us more than a few minutes to complete this final step, provided you don't count the four hours of driving between Mairena and Granada.

Our newly renewed visas expire on September 12, 2022.  That’s just 17 months away.  Thinking about that just makes my head hurt.

After nearly nine months, our bureaucratic odyssey was finally at an end.  Naturally, we felt like celebrating and went out for an Alhambra Cerveza Roja.  It was only half past twelve, but we didn't care.  It was five o'clock somewhere.

Three Weeks in the Austrian Alps

There is something about mountains that stirs one’s soul. I doubt we will ever forget the three weeks we spent…

Coming Around to Gentle Yoga (Again)

I’m ready to learn more senior-safe yoga. Susan is ready to guide me. The best part is that as we…