We spent two weeks in Ocean City, Maryland taking in the surf, sun, and sights of the Atlantic, Chesapeake Bay, and Assawoman Bay located between Ocean City and the mainland of Delmarva.  For us non-locals Delmarva means Delaware, Maryland, and Virginia.  More than a holiday destination, this is a place rich in history, nature, and tradition.

“I’ve been wanting to visit Smith Island and I think it’s someplace you would enjoy,” observed Jamie’s niece, Bridgette.

“Well,' replied Bridgette, 'it’s Maryland’s only inhabited island accessible only by boat in the Chesapeake." (Virginia has the other inhabited island called Tangier Island.) "It’s where they make the Smith Island Cake, a treat so famous it is now the official Maryland state dessert, and you’ll get a Chesapeake experience.” And so we went.  Just like that.  The Chesapeake was the draw for me.

Getting to Smith Island by Ferry

We left Ocean City for a nice 65 mile rural drive to Crisfield in Somerset County Maryland.  Several passenger ferries and a mail boat ply the waters between Smith Island and Crisfield. We chose Smith Island Cruises.  Our 12 mile ride across the Chesapeake took us about 50 minutes.

Some limited narration was offered by the captain in a deep, distinct accent that to me sounded like a 1930s movie.  Actually, a native Smith Island dialect still exists but has softened for the people who move freely to and from the mainland. This Youtube video will give you an idea of what the dialect of a permanent Smith Island resident sounds like. 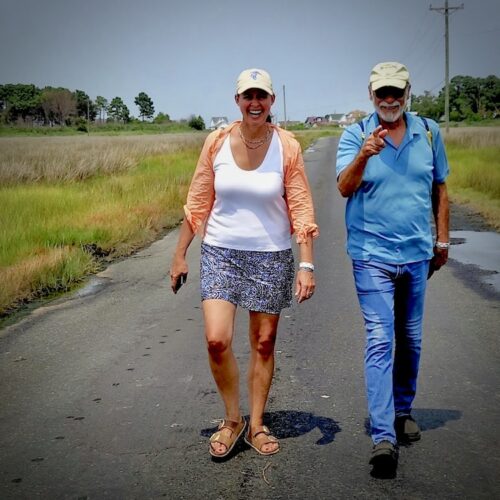 Smith Island actually offers just a bit more than what we could do in the 2.5 hours before our boat returned to Crisfield.  Surprisingly, most of the people on our ferry walked straight into the Bayside Inn Restaurant for lunch.  What I didn’t realize is that they had bought a Cruise/Crab package and it included an enormous lunch - actually a glutton feast - at the restaurant.  Seriously, there are only two things that draw most people to the island - to eat crabs and to eat Smith Island Cake.

We ate our picnic lunch on the boat so we would have time to explore the island.  And, we took our Smith Island Cake to-go from the city of Crisfield no less, since that is where the Smith Island Baking Company  relocated a few years ago.

Though it was a hot day and we could have rented bikes or a golf cart, we elected to walk the three mile stretch between the village of Ewell where we landed to the village of Rhodes Point and back again.  Along the way, we watched waterfowl in the marshes, looked at how people lived and how they made their livelihood (crabbing and fishing).

We looked into the graveyard of Calvary Methodist Church.  Rank upon rank of headstones and only a handful of surnames suggested that few families have populated this island in the last century. 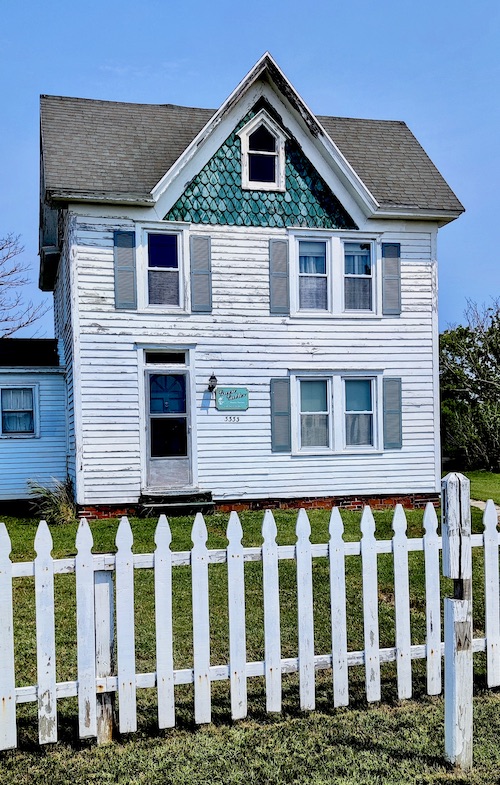 The island lost half their population in the last decade.  As of 2021 only 149 people are spread between three villages: Tylerton, accessible only by boat, Ewell, where the ferry boat lands, and Rhodes Point.  Ewell has the Post Office, the BaySide Inn Restaurant, the original Smith Island Cake Bakery, and the Smith Island Cultural Center.  Rhodes Point has a dentist, a Calvary Methodist Church, and an exotic history.

During the Revolutionary War, Rhodes Point was called Rogue’s Point. It was where islander freebooters hid out after raiding the mainland.  They stole anything they could get away with, from household goods to sailing schooners.

The freebooters fenced their booty to a man who had no scruples about whom he sold to, including the British Navy.  That’s how pilfered American schooners under British colors came to be used  to patrol Chesapeake Bay.

Even as tiny as the island is (with erosion reducing its size with every passing year), two lovely B&B’s accommodate overnight stays. Susan Evan’s B&B in Ewell and Island Time B&B  in Rhodes Point look like charming places to spend a night or two.  Kayaks and bicycles are included and golf carts can be rented.

Sadly, we ran out of time to take in the Smith Island Cultural Center.  It’s just a hop, skip, and jump from the boat landing.  I did a quick tour and would definitely recommend it as a starting place.

Hot, dusty, and dry after our walk, we thought we’d spend the last 15 minutes on the island enjoying a beer only to discover Smith Island is dry.  A refreshing glass of iced tea hit the spot instead.

We’d arrived on a warm and sunny Thursday morning in October. It was market day. The village streets were jammed…

Yes, you can travel by train with your cat in Europe

Even though traveling with an old cat has its challenges, it’s nothing compared to navigating Covid restrictions in the E.U.…

Jenny: A profile in Gentle Living

In 2005 my life intersected with a remarkable young woman from Barcelona Spain. I am delighted to profile Jenny Berengueras…