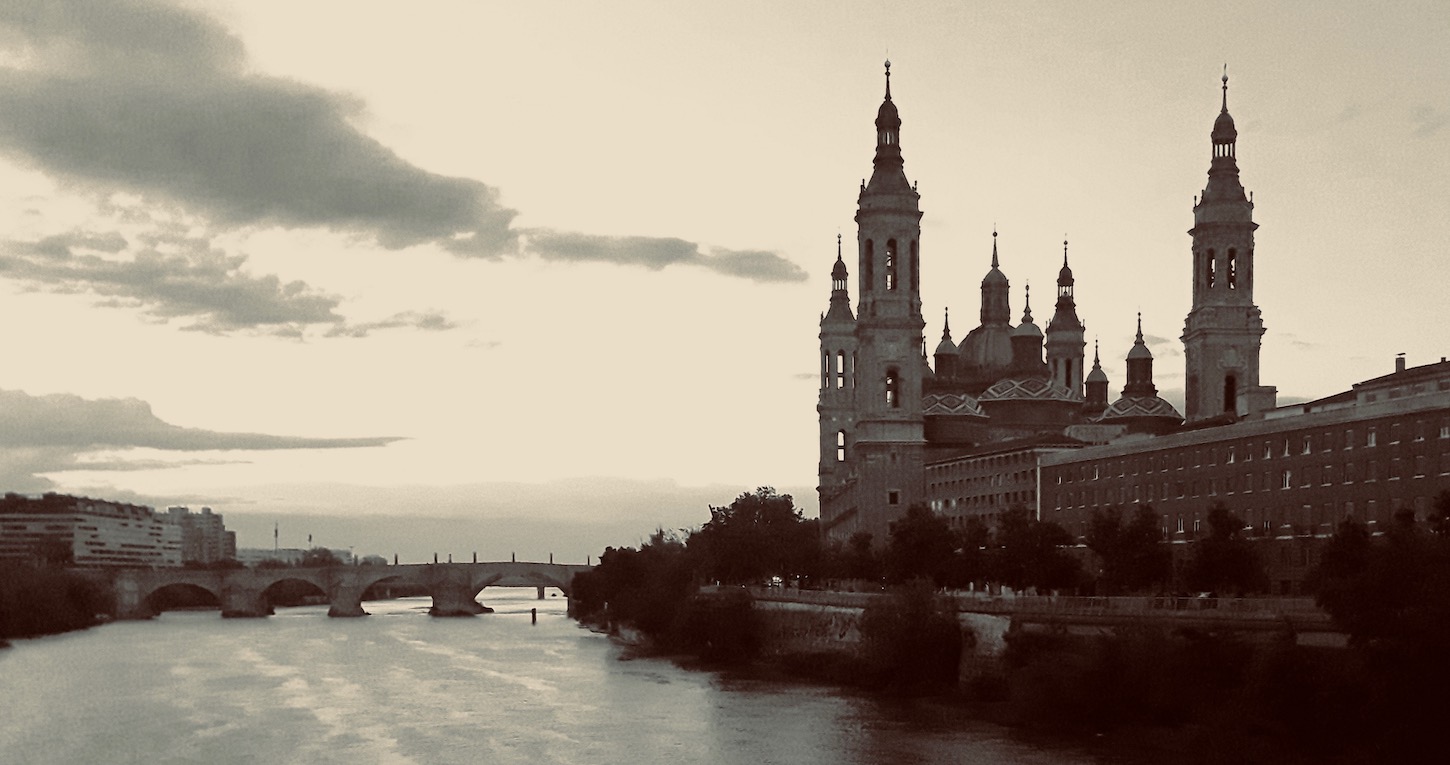 The towers and domes of Basílica del Pilar beside the Ebro River.

Zaragoza, capital of the old kingdom of Aragón, I love the name.  Say it with a bit of base in your voice; roll the “r.”  The sonorous name comes to us via the Arabic interpretation of the city the Romans founded in the year 14 BC and named Caesaraugusta.

There’s plenty to recommend Zaragoza, Spain’s fifth largest city, yet it barely registers on the international tourist meter.  One of the reasons my nephew Peter and I just spent a couple days exploring the venerable city by the Ebro river.  Though I’d been eyeing Zaragoza for several months, our's was a last-minute visit.  We didn’t do much but book a room before heading out to the Valencia Nord station where we purchased tickets for the 9:35 train.

Peter and I haven’t had a lot of time together in the past few years.  After some years of serious travel, Peter  focused on getting his law degree and then on beginning his career.  In the summer before Susan and I moved to Spain, my brother, Peter's dad, died after a long struggle with kidney disease. We had a lot to talk about as we passed the five and a half hour journey sharing ideas about what’s important in life.

That uninterrupted time - just talking together as we rolled by villages, forests, and fields - was important.  During the next two days we walked and talked some more.  We took in the sights and sounds along the streets of Zaragoza almost incidentally. Nevertheless, Zaragoza was an interesting, even an impressive, setting for our exchanges.

What we liked about Zaragoza

Being the curmudgeon that I am, I object to the casual use of the term “awesome” to describe a good, but more or less ordinary experience.  I mean if a veggie burger is awesome, what word do I use to describe the magnificent scale of Plaza del Pilar or the cavernous seventeenth century Basílica del Pilar that flanks it?  I  enjoyed everything about the plaza. I enjoyed it so much, I neglected to make any photographs.

Peter and I spent a couple hours over lunch and a glass of wine, (maybe two), absorbing the April sun, people watching, and just plain marveling at the audacious scale of it all.  I might have lingered until sunset, but Peter was inclined to walk (and walk and walk).

The Roman theatre ruins and the accompanying museum reminded me of my theatre history classes.

The first interesting location we happened upon was the ruined Roman theatre.  The neighboring museum tells the history of the theatre structure adding a good dose of  background on Roman plays and dramatic conventions. The history is localized with entertaining stories of the actors and audiences who brought the dramas to life.

There are three additional museums dedicated to the Roman history of Zaragoza.  Susan and I will have to return some day to visit those.

The Palace of the Aljafería

The Palace of the Aljafería

Like in Teruel, there are several outstanding examples of the Mudejar architecture  in Zaragoza that make up a World Heritage Site.  One of them is the Palace of the Aljafería, with an interior like a mini-Alhambra.

The large fortified palace dates from the period of Muslim rule in the beginning of the second millennium.  After 1118 when Zaragoza passed into Christian hands, the palace and grounds underwent many alterations.   In the 1490's the Catholic Monarchs, Fernando and Isabel, tacked on their own palace.  A hundred years later in  the 1590s the Aljafería was converted into a fortress before it fell into near ruin in the following centuries. Extensive restorations in the twentieth-century  brought the building back to life.  Aragón's regional parliament has been housed in part of the complex  since 1987.

By Train From València Nord

Zaragoza is easily reached from Valencia by train. The trip takes about 5 hours by Media Distancia train from Valencia. Ours was a spur of the moment trip, so we purchased our tickets at the station.  There are fifteen or so stops along the way, including Teruel, which would make a good stopover, if you aren't inclined to go the whole distance.