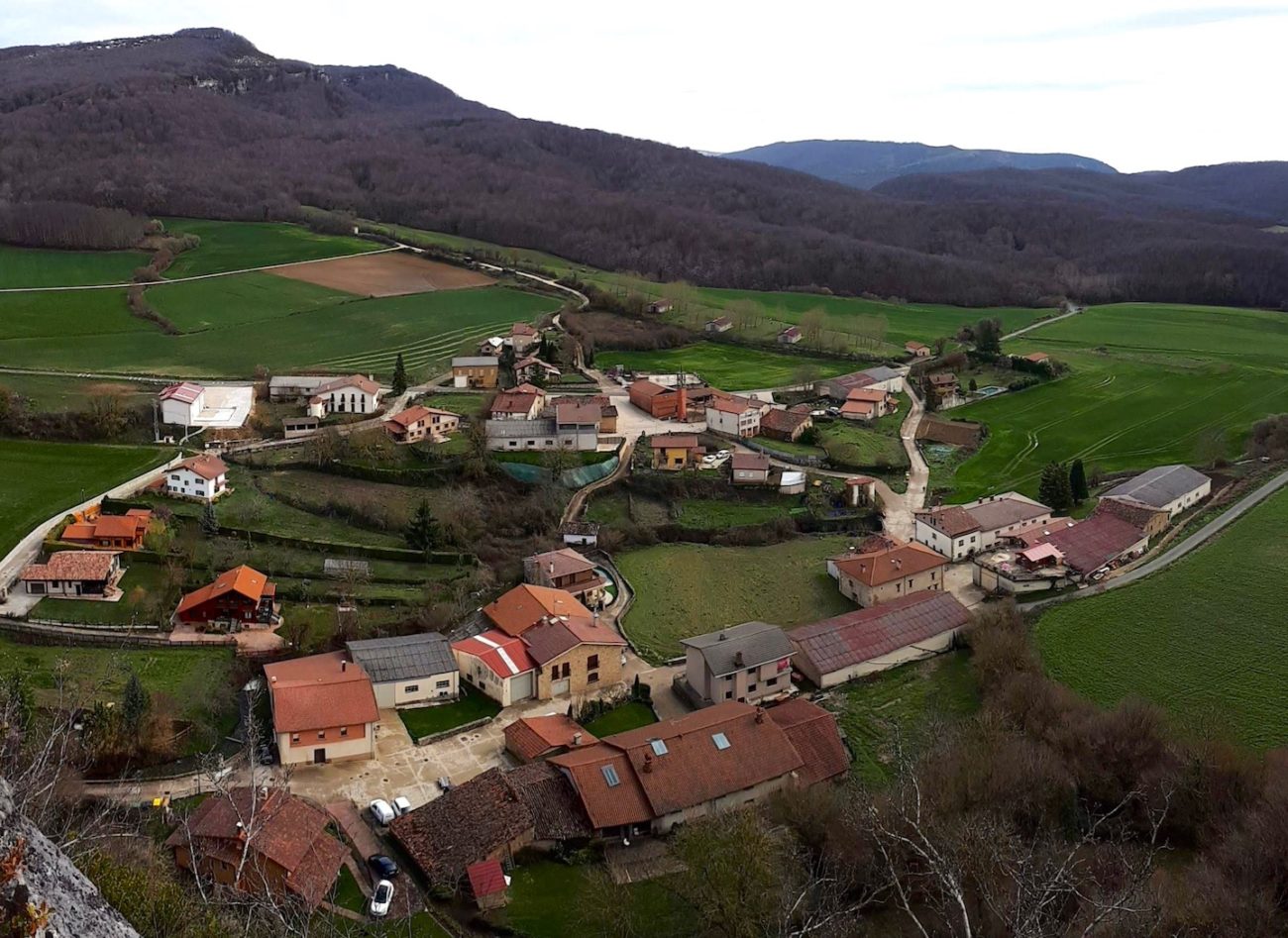 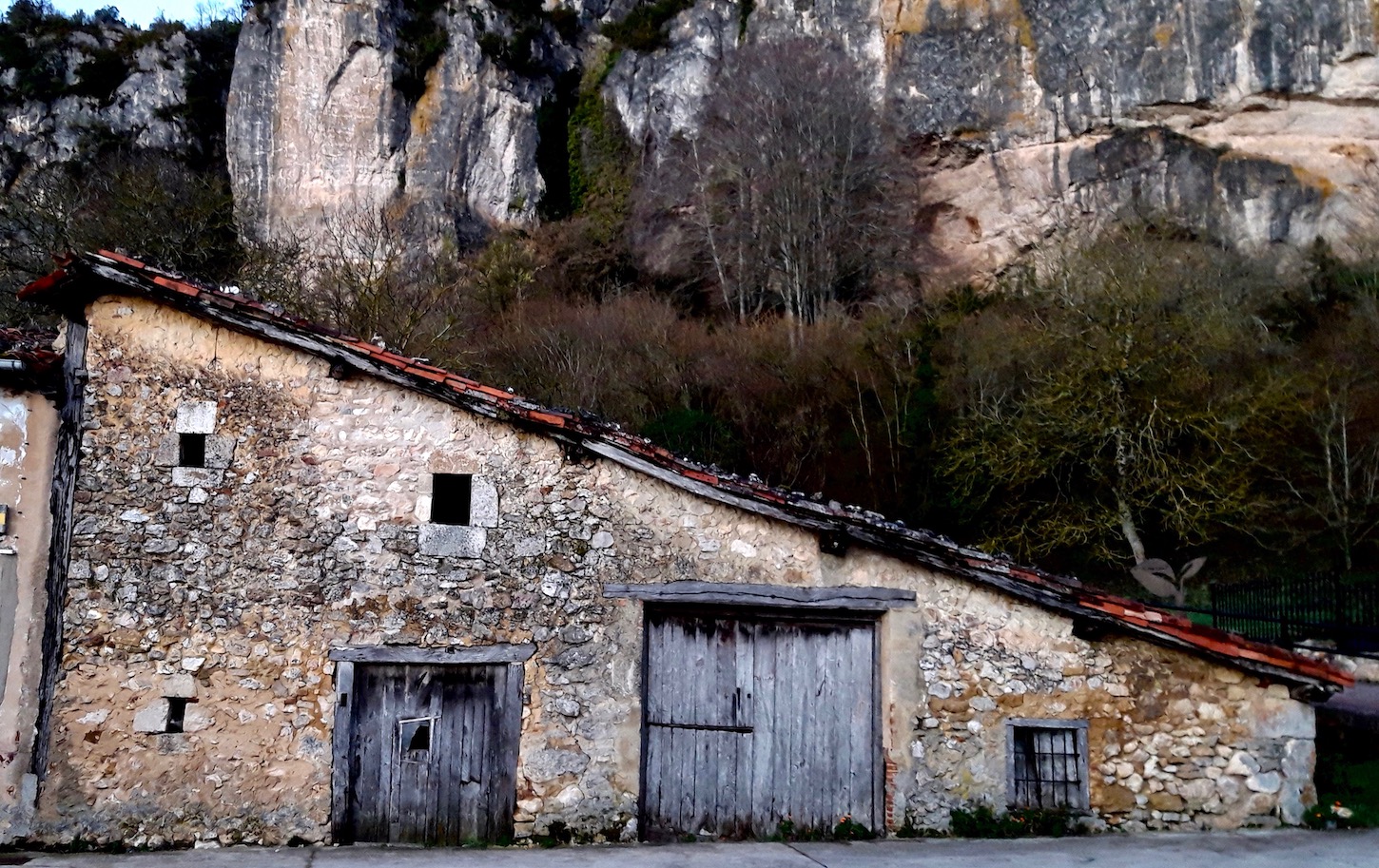 Late last year our friends Mat and Kathryn suggested we escape the noise and crowds of Valencia’s bacchanal, better known as Las Fallas. We spent the first week of our three-week sojourn in the Spanish Pyrenees.

The morning we left Fiscal, Aragón we were anticipating a warmer and sunnier week in the Basque Country. We thought we’d leave the snow behind when we left the Pyrenees. No, big, fluffy flakes caught us on the highway and stayed with us directly to the door of our next casa rural (country house) in Sabando. It was the first time our friends had driven in such snowy conditions.

Our host at La Casita del Rio had a roaring fire going in the fireplace. We luxuriated in the warmth as we marveled at the well-equipped kitchen. The best in our combined Airbnb experiences. The house is right at the edge of town, which isn’t saying much -- all of the houses in the village are at the edge of town. Cute and comfortable are the only words appropriate for this place.

During our time in Sabando we both thought of poems written by Robert Frost.  Jamie thought of two roads diverging while he and Lizzie tramped along unmarked trails.  Susan called to mind the poem, Two Tramps in Mud Time. Especially this passage:

The sun was warm but the wind was chill.
You know how it is with an April day
When the sun is out and the wind is still,
You’re one month on in the middle of May.
But if you so much as dare to speak,
A cloud comes over the sunlit arch,
A wind comes off a frozen peak,
And you’re two months back in the middle of March.

Now, we really were in the middle of March so we shouldn’t have been surprised that it snowed, rained, hailed and the sun shone all in one day, let alone one week.  We were so fortunate to enjoy a full seven days so we didn’t feel antsy about the weather and had plenty of time to explore the area.

This tiny village of maybe 15 or 20 houses, several barns, a couple of chicken coops, and pretty much nothing else is just darling. The village is nestled up against rocky cliffs (peñas) that contrast beautifully with the deep green grass and wheat fields of the valley bottom. The surrounding hills are cloaked in beech-oak woodlands that are typical of southern England according to our friends, but were a new experience for us. There are no services in the village.

In the Middle Ages Sabando was a strategic enclave astride roads that passed between Navarra, La Rioja and the coast. Today the village is made up of a combination of second homes for city dwellers and a handful of full time residents. The total population in 2017 was 36. It’s easy to tell the difference between full time residences and second homes when you see which house has a chicken coop and especially when someone shows up on Thursday night. Most of the houses are made of stone with tile roofs (no big bad wolves welcome) and pride of ownership is obvious throughout the village. 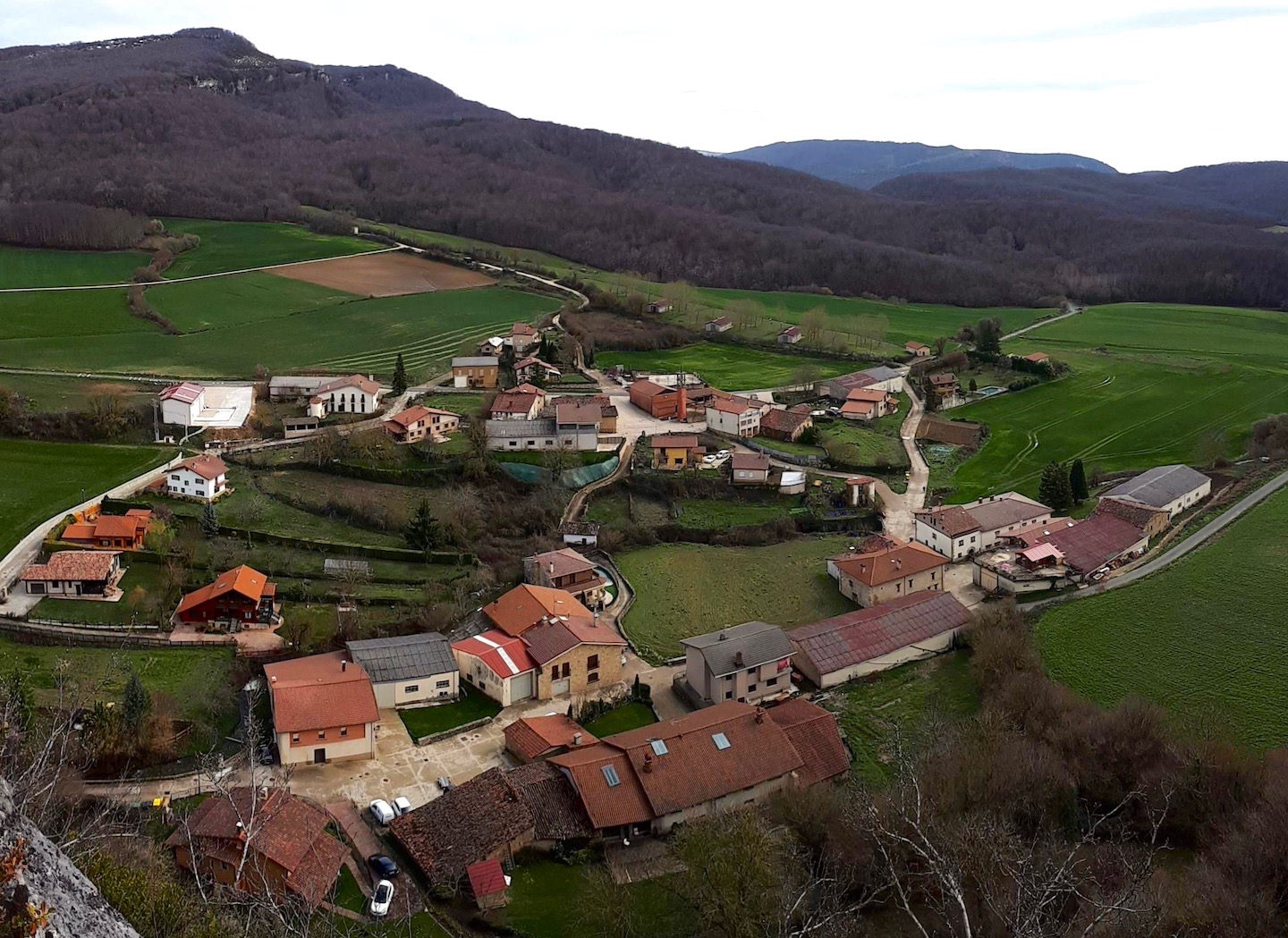 This tiny village was a delightful get-away. We had pleasant hiking options right outside our door.

It was easy to take to the surrounding hills or to the farm lanes on the valley floor directly from our front door.  Since there was no one else around, we felt free to follow any divergent path in the woods.  And we did.  We found beautiful open meadows for yoga stretches, glorious views of the valley floor from the edge of the peñas,  and we made our way to a waterfall at the far end of the valley.

When the day was rainy and the wind was chill, we set out to visit some of the surrounding communities. 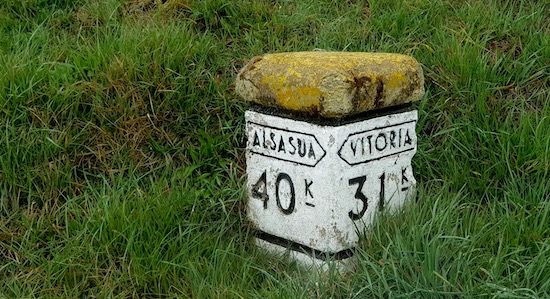 The road called us to explore farther afield

Why two names for the capital city of the Basque Country autonomous community?  Well, Vitoria is its Spanish name and Gasteiz is the Basque name of this pleasant city with more park and cultural space per capita than any other in Spain.  When you visit, you’ll only need to use one of the names.

We spent one rainy day in Vitoria walking around the major city sites.  Fortunately, it was Saturday so we encountered a street market, musicians playing Cuban music, and stopped off in a pincho bar to warm up.  The cold drizzle got us to consider the cathedral tour but a two-hour wait for the English version put us off.

The most pleasant aspect of our visit was that at every turn there was a different and lovely park.  All the city's residents live within 300 m of a park or open space.

On a nicer day we would have explored the outdoor spaces more.  We read about the green belt, a network of parks and green spaces around the city. The project began in the early 90’s and is destined to become the Vitoria lung, much like Parque del Rio Túria in Valencia - the heart of Valencia as far as we are concerned.  Vitoria is definitely worth a future visit.

One of the many beautiful parks in Vitoria

We were so close to La Rioja and all four of us wanted to explore another Spanish autonomous community on this trip.  Plus, there’s the famous wine domain of the same name  -- which actually includes sections of Navarre and the Basque Province of Álava.  A sip or two of fine red wine seemed appropriate too.

Then there’s Laguardia, self-proclaimed as one of the prettiest medieval villages in Spain.  And, it is a charming town with a number of historic sites as well as beautiful, intact medieval walls.  The tourist information center has preserved one of the original 200+ wine caves dug under the city.

Because we had our dogs with us and couldn’t sample any fares from the wine shops, the hottest action in town for us was the town clock.  At noon three clockwork “dancers” make an appearance.  There weren’t any other tourists around so we were the only ones running from the café to see the clock in action.

It’s easy to see vineyards and wineries spread across the valley floor from the lofty advantage of Laguardia; it’s surrounded by them.  The abundance of bodegas is like exploring Napa or Sonoma.  Made us just a little bit homesick for Oregon’s Willamette Valley.

We selected Campillo Winery because it looked so lovely from above.  The winery was fairly new – built in 1990 and we had the place to ourselves for a tasting.  Now, when we shop for wine locally we’ll be recognizing some of the five different labels bottled by Campillo.

Logroño is the largest city in La Rioja and just 15 minutes away.  We had high hopes for Logroño after reading of their special pincho night on the 10th of every month.  The restaurants along Calle del Laurel offer vegan/vegetarian pinchos on this one night.  We didn’t want to wait until 9 p.m. to go but we were there on March 10th so we thought we’d check it out. 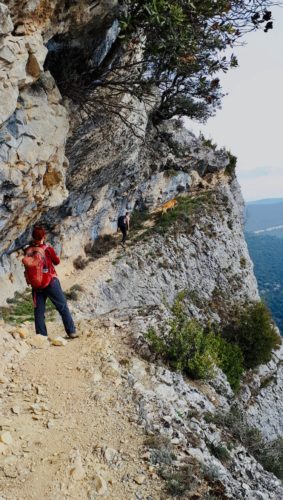 The hike at Izki Parque Naturala was difficult, but spectacular.

Calle del Laurel is a narrow street full of Spanish bars and restaurants and a tourist destination for Logroño.  Since we were looking for a place to sit outside with our dogs, we selected a sunny courtyard restaurant with vegan sandwiches so lousy we didn't finish them.  But the wine was good.  In our estimation, Logroño isn’t a city worth a second look.

Elciego (the blind man) is a charming pueblo where we sought out the Frank Gehry Hotel Marqués de Riscal.  We thought we could walk right up to it, even visit the lobby like a normal hotel.  The entire structure was behind a gated park accessible only with a 19 euro tour or a hotel reservation.  The hotel is surrounded by the Vinos de los Heredos del Marqués de Riscal - the inherited vineyards of the Marques.  If you have 500 euros you could spend the night here, but, I think you’d want to settle in for more than one night and spend another 500 on the food and wine you’ll drink.

Dogs weren’t allowed.  We gave it a miss.

You can approach the nature preserve called Izki Parque Naturala from many points.   We chose to go in through the town of Corres (Korres in Basque) where they have an interpretive center.

The helpful staff shared their favorite trail (which happened to be the most difficult) taking us to spectacular views, scary cliffs with security ropes and a first for Jamie and me, “rappelling” down a steep descent.  The hike we took was only 7 kilometers but it took us 3.5 hours.

Izki Parque Naturala wasn't all scary cliffs. We enjoyed this walk a lot.