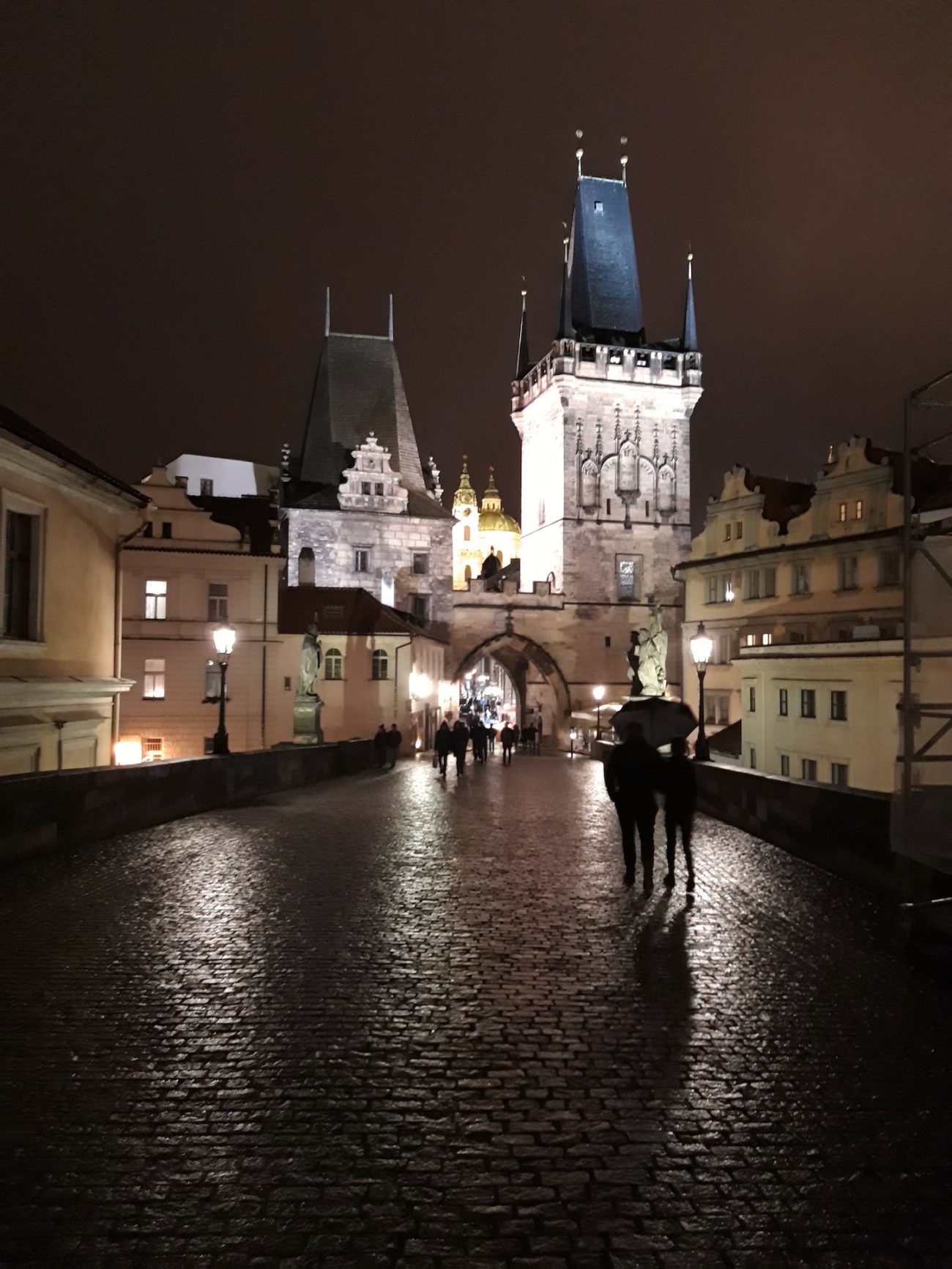 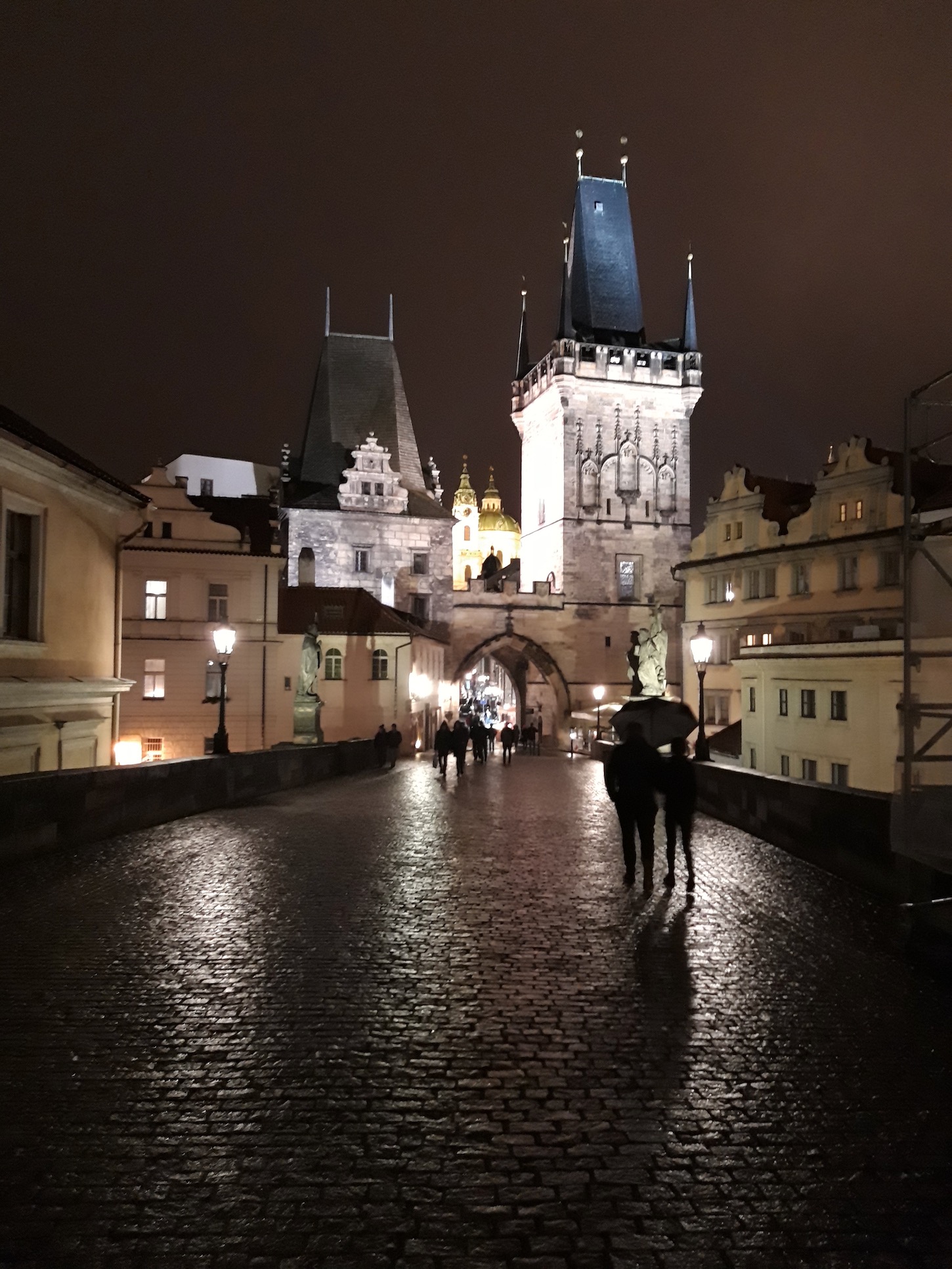 Charles Bridge completed in 1402 is usually much more crowded

Prague is a year-round destination and the Christmas season adds an extra sparkle to an already handsome city. With a little snow you have a classic winter destination.

After spending Christmas 2017 in Valencia, Jamie was willing to head for a snowy clime in 2018. I figured that by visiting Prague in December we’d have the added fun of Christmas Markets and world-class holiday decorations. A hundred years ago, Jamie’s grandparents fled to America from what was then Bohemia. He was looking forward to kolachi and slivovitz and halusky – drinks and foods of his childhood memories.

It being December, we arrived at sunset and by the time we made our way from the airport, the city was all lit up. It made quite an impression. As we made our way across the Legion Bridge on the Vltava River, I had a hard time deciding whether to spend my time staring at Prague Castle or the National Theatre. I settled on trying to look everywhere at once and made myself only a little dizzy.

Once we dropped our bags at our Airbnb, we thought we’d walk the Charles Bridge (completed in 1402) even though the weather outside was frightful. I knew it’s popular for people to walk the bridge along with the lamplighter at 4 p.m. in the winter, but who in their right mind would be out with us at 7 p.m. in the near freezing temperatures, howling wind, and pouring rain? A great many people it turns out, but still only a fraction of those who turned out during the brilliant sunshine the following day. The Charles Bridge is popular beyond belief. Imagine what it must be like in the summer.

We like to find a local tour guide for each city we visit and to take an orientation tour soon after we arrive. It always makes our trip so much more meaningful. Reviewers sang the praises of Jason of Living Prague Tours. What’s more, his tours are limited to a maximum of 6 people, a real plus. But it was Jason’s engaging style and storytelling that really made his tour standout for us. 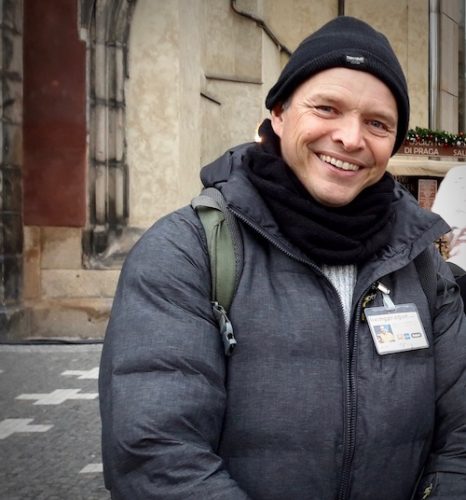 Jason's tour was entertaining and enlightening.

We picked up a tiny bit of Czech on the tour when Jason pointed out that illiterate workers delivering to the shops and restaurants used sculptures to identify the right place. A shop named U Trí Housliček means “You are at” (U) “the three” (Trí )”violins” (Housliček). We saw the pattern repeated throughout the city – The Three Storks, The Two Bears, The Three Piglets, The Two Drums, The Three Ostriches….you get the picture.

After 2.5 hours we had a good introduction to Czech history from medieval times to the present, an appreciation of the current political situation, a clear idea of the old town and Jewish Quarter geography, and a hunger to learn even more. I only wish we had pre-booked two tours with him. That’s how informative and fun it was.

Jason has a way of peaking your curiosity about something by providing just a little information and telling you he will come back to that story later in the tour. For example, he pointed out a “Stumble Stone” to us, a small brass plaque placed flush in the sidewalk as a memorial. This first one was in the middle of the sidewalk next to a plaza.

Later, we stopped in front of a residential building where Jason pointed out four more of the bronze "stones" and told us stumble stones represent the last freely chosen place of residence for the people (Jews, Gypsies, political opponents and others) abducted and killed by the Nazi’s during WWII. 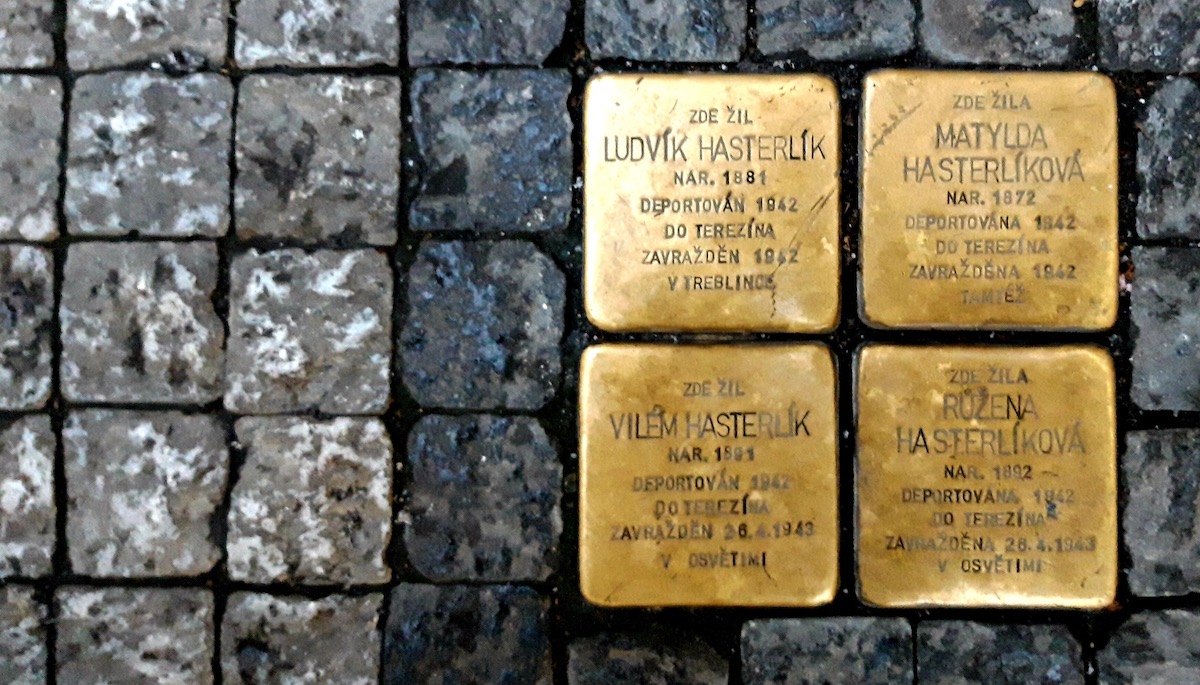 Stumble stone were a sobering reminder of recent history.

The residence no longer existed in the first example we saw, yet the stumble stone was still placed in that location.

The first 50 stumble stones were placed in Berlin, Germany in May 1996 by artist Gunter Demnig. On October 23, 2018, the 70,000th stumble stone was installed in Frankfurt, Germany. These memorials are in over 1,000 cities in 24 European countries. We found the experience to be a moving reminder of recent history. If we hadn’t taken the tour we wouldn’t have known anything about them.

First, I saw a dog getting off the tram with his person. Then there were the dogs on the metro and dogs in stores. I knew something was up. Later, chatting with a few people out on the streets with their dogs, my suspicion was confirmed. Dogs are like peeps in Prague. We were ready to move, but the cats objected, so we’re still in Valencia.

I’d heard so much about the Christmas Markets of central Europe, I was eager to get to as many as possible. There are large Christmas Markets in the city center (Old Town, Wenceslas Square, Republic Square) and smaller Christmas Markets scattered around the city. After we explored the market in Old Town, I could tell Jamie wasn’t even a little engaged. In fact, I was disappointed too, but I thought maybe if we try one (or three more), we’d find one that resonates with us.

We found a market in Lesser Town that had very good mulled wine. And we ate delicious vegan crepes prepared especially for us at the Vinohrady District Christmas market (where we also found the world’s worst potato pancake), and we happened on a Saturday market at the National Theatre which had the only truly hand-made items for sale. But, while I enjoyed the festive ambiance of the markets and especially appreciated sipping hot wine, for my money, the Christmas Markets are nothing special.

There are many spectacular venues for classical concerts in Prague from a castle to a palace, from monasteries to churches, and concert halls to theatres. You can catch a concert at noon, before dinner, or after dinner. Plus, there are jazz concerts on boats, in clubs, and restaurants.

I booked one concert in advance through the Prague Ticket Office. It might not have been the most affordable way to do it because you can pick up tickets at kiosks on the street in front of every venue. We chose a concert in the Mirror Chapel of Prague Klementinum, the former Jesuit college. The intimate Mirror Chapel dates back to 1725 with claims of performances by W.A. Mozart. The program was attractive, the place was heated, and there wasn’t any organ music (which I’m not crazy about). The concert was perfect. At 65 minutes, I only wish it was longer.

Eating Vegan in the Capitol of the Czech Republic

That was enough hype to prompt me to search and map several vegan restaurants in advance, rather than what we usually do – which is look for any nearby restaurant that serves vegetable-based dishes among their traditional ones. 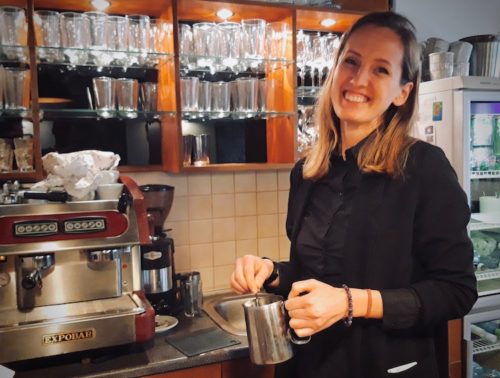 On the other hand, we’d happily go back to Vegan’s Prague on Nerudova Street where we had a goulash that was so good we’re making it regularly at home now.

So after missing on two out of three vegan tries, we relied on serendipity for our remaining meals. And that’s how we found the best meal we had in Prague. We almost missed Georgian Restaurant Tbilisi at Tomašská 14/21 in Old Town. It is quite far up a side passage and we almost turned back, but thank goodness we didn’t.

We had a mix of several Caucasian vegetable dishes and their stuffed bread with beans that left us craving more. And we finished off that meal with a delightful Georgian brandy and discussion of Georgia with the proprietress who was also our waitress. We were so impressed, a visit to Georgia is on our travel docket and we are searching for Georgian restaurants back here in Valencia.

One Miss, One Draw, and a Hit

I’ve been a Beatles fan since Love Me Do, so when I realized that we were only one street away from the John Lennon Wall, I was ready (and Jamie had no objection). The wall was first created in 1980 by the youth of Prague after Lennon’s murder. It began with one person painting an image of Lennon and some song lyrics. That was then.

In 2014 the wall was painted over by local art students on the 25th anniversary of the Velvet Revolution. And what you see today is not original and it’s ever changing. The truth is that now it’s graffiti on top of graffiti and really kind of a mess.

Prague Castle is beautiful. From afar it’s beautiful. Up close, still beautiful. And so completely uninteresting on the inside.

We had an energetic walk across the bridge and up the hill on the afternoon we visited the castle.  I didn’t want to miss a thing so we stood in line and purchased tickets. Then after a couple hours of shouldering our way through the crowded interiors, we realized that the only thing we missed was the 500 Czech koruna we’d spent on the entries. Thank goodness we didn’t buy a tour. 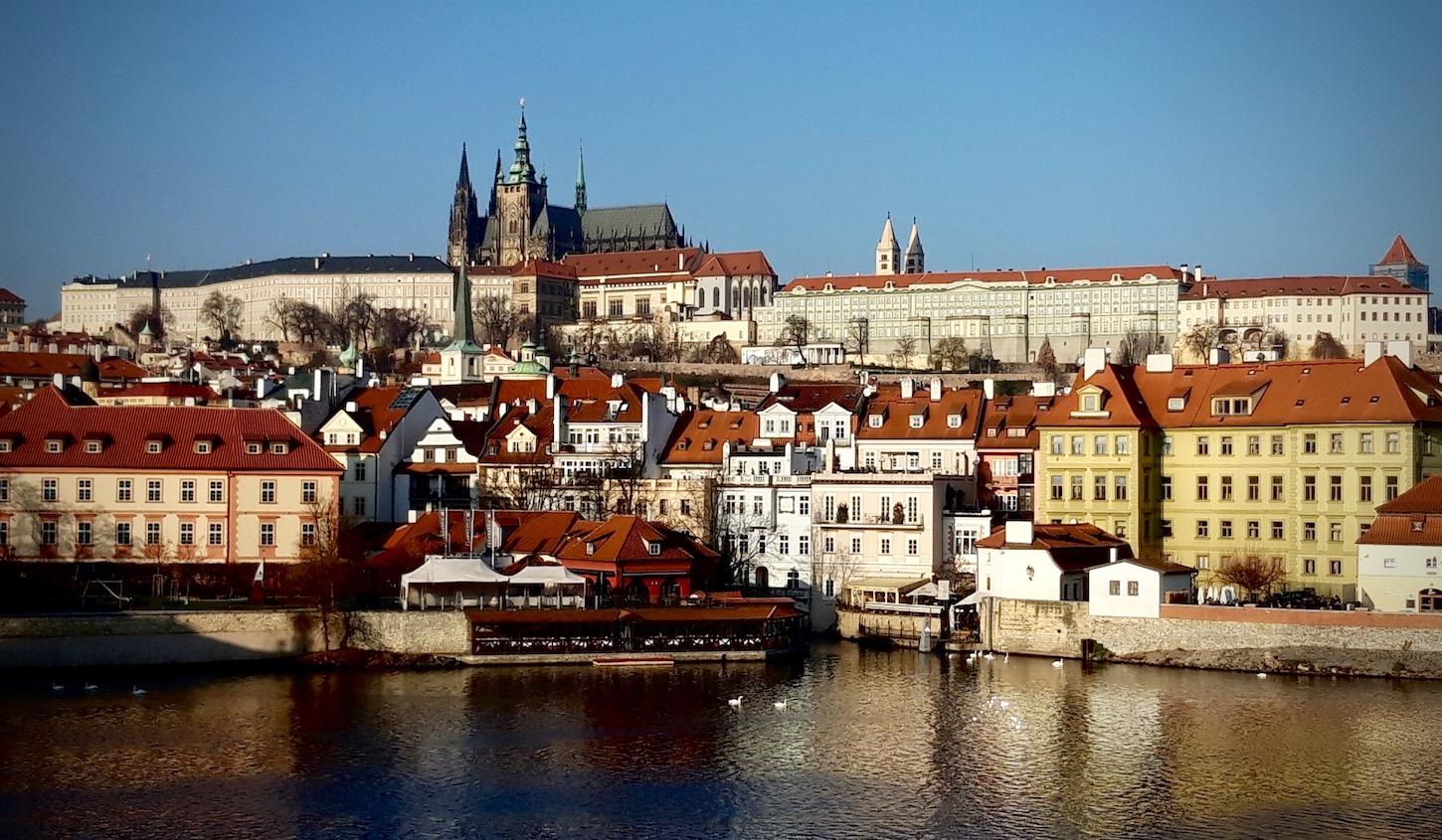 Prague Castle is stunning from a distance, inside--- not so much

Not every tourist site fails to live up to its hype: I think the 519 year old U Flekü Brewery & Restaurant earned its place as a popular tourist destination in Prague. Food was great (they have vegetarian and vegan options) and their beer -- one style only (dark)-- happens to be my favorite. Add in the crowds around family style seating and the accordion player and you have the makings of a festive atmosphere. Even Jamie, who earnestly (and honestly) resists tourist traps had fun and would recommend you give it a try.

Getting there from Valencia

We flew on Luftansa from Valencia to Prague. We transited Munich on the way there and Frankfurt on the way home and with one stop the journey was just a little over 4 hours.

The metro system, trams, and buses and easy to use in Prague. The metro doesn’t go all the way to the airport but you can book an airport transfer for the 30 minute ride into the city for about €30. During our visit we explored by metro and felt comfortable taking the metro/bus combination back to the airport. It cost 32 czk or about $1.50. It was fun and easy plus it matches our values to take public transportation whenever possible.