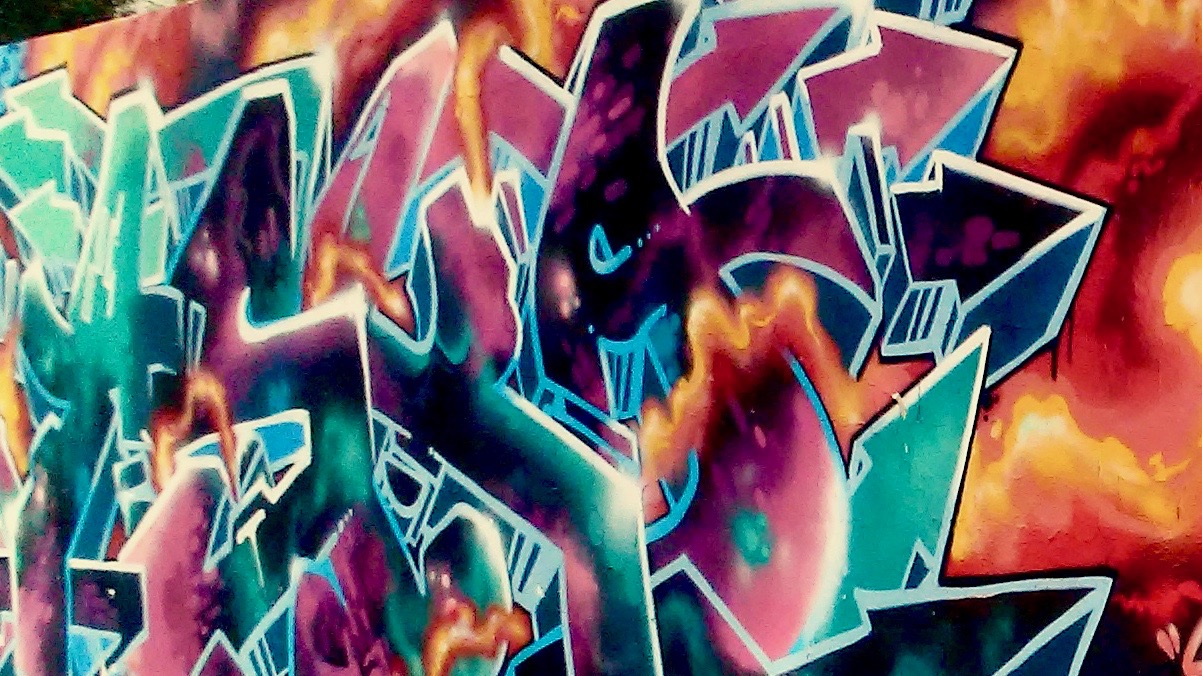 After a young friend of ours reported she’d had a positive experience with an intensive Spanish class, we each signed up for our own month long class at the Centro de Idiomas de la Universdad de Valencia.

Jamie enrolled in the morning class and Susan opted for the afternoon class.  We imagined interesting opportunities to enhance our very basic Spanish speaking and listening skills in an engaging environment, replete with innovative and enjoyable lessons and activities.  What we ended up getting was a month long slog through Spanish grammar delivered at fire hose intensity.

We’ve captured our reactions both positive and negative in the following parallel stories.

I was in a class with 14 Erasmus students from Ireland, Hungary, Germany, Taiwan, Finland, Holland, and Italy. The oldest Erasmus student in the class was 24. These polyglot “kids” came into the class with their native language, fluent English, at least one other language and enough Spanish to respond to the teacher’s questions in full sentences. Plus, they seemed to have an ear for language. All that plus ears that still worked, unlike mine.

Classes are limited to 16 students and our 16th student showed up on the second day as a complete beginner in Spanish language study. I could relate to him. Unfortunately, he didn’t return the next day leaving me the honor of being the slowest in class.

What is an intensive language class?

An intensive class means two things – fast pace and complete immersion. Spanish is the only language spoken in class. You want an explanation? For better or worse, you get it in Spanish. Word definitions proved a little easier. I never knew so many words could be acted out without the rules of Charades (first word, two syllables, etc.) I could usually guess the meaning of the word from the superstar acting of our teacher, Marie Angeles.

One of the first exercises entailed introducing ourselves. Thankfully, that’s no longer a problem for me. I’ve done it many times. But this time, we were asked to include our age…that was a little embarrassing.

By the end of the month we were answering moral questions such as, “The bank deposits an extra 200€ in your account. Do you say anything or let it go and why?” Answering a question like this takes a lot of vocabulary! Listening comprehension was even more difficult. Prerecorded interviews sounded like a 78 rmp record. Spoiler - I failed. Those darn ears again.

I did love the variety of exercises. To learn a future tense we used special playing cards to tell the future of our compañero. We played tick, tack, toe with a twist. In order to claim the box with an X or O we first had to conjugate the past tense verb. We wrote about our trips, our apartments, even the differences between our home country and Spain.

Class started to get dicey when the teacher introduced three past tenses in one week. I thought I would make it through this class without crying until we were tasked with the absurd exercise of using multiple past tenses in the same complex sentence. All of a sudden I was flooded by the same feelings of hopelessness that I had in calculus class.

The day didn’t end when class was over. It may have been a three hour class but it was a full day experience. In addition to homework I spent hours scouring my texts and the internet for grammar explanations in English. It was just beyond my vocabulary and listening comprehension to understand the lessons explained in Spanish.

What did I get out of this?

I developed strong study habits and a renewed motivation to finally learn Spanish. I even think I will get this material embedded in my brain with a few months of solid practice.

One gets a little lazy in retirement and I actually enjoyed the routine of the month. But I also wasn’t unhappy that it was over.

The highlight of the class was meeting the young students embarking on their most exciting adventure to date – a year in a foreign country. Some of the students arrived the day before class started and still had temporary housing. Others were negotiating leases, finding roommates, and setting up house while beginning classes. They were such fun to be around and their brave, bright, cheerful attitudes were contagious.

What would I have prefered?

There were so many times I wanted to have something explained to me in English. For each lesson I actually grasped, I know I also missed that much and more. I missed a lot of nuance and I definitely missed the jokes. Several times each class I thought, “Why is everyone laughing?”

At the end of each class I would ask for clarification on the homework assignment. Then, hallelujah, the teacher started writing it on the board. No more excuses for me.

Would I do it again?

This one month intensive class is something I am glad I did for the experience but I wouldn’t do again. My teacher even agreed that an intensive class is very difficult for a student’s first class. She indicated that the other students had experience in verbal comprehension and expression. At least that’s what I think she told me.

My own self-study proved beneficial for building vocabulary and basic concepts but left me woefully underprepared for this class.

I do want to continue formal classes because I now recognize their value. But, I’ll be looking for a slower paced class in the future.

Worn out, I completed an intensive Spanish language course with much less enthusiasm than I began it 28 days earlier.

My professor was kind and I think she was committed to helping her students each and every day. And even though I was a bit surprised to be one of only two non-university students, I did enjoy meeting the eleven students who were enrolled in the Erasmus program, an EU-wide study abroad program. My class was made up of students from Ireland, Italy, Germany, France, Kosovo, and Belgium. I was the only American. Except for our professor, the common language was English. Despite an age difference of more than four decades, I formed a few friendships that I think will last. 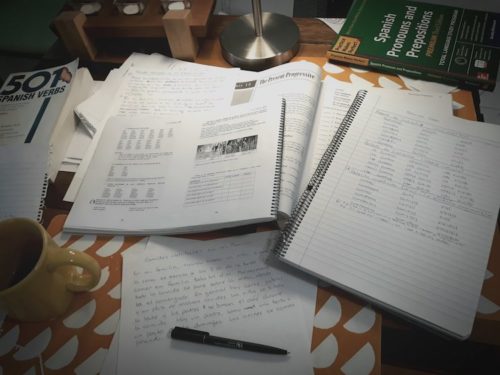 We needed to consult our library of study aids as well as online resources to understand the materials presented in class.

A range of student experience in Spanish

There was such a broad range of abilities and experiences among the students in my class that at least half of the students were either bewildered or bored.

I think all of the other students had formal coursework in Spanish before they came to Spain and the three Italians had a marked advantage in being native speakers of a remarkably similar language. While the Italians sought clarification on fine grammatical points, we English speakers were trying to puzzle out just when we should use the pretérito imperfecto versus the pretérito indefinido, or in my case trying to understand why I ever thought I might want to study Spanish in the first place.

After getting through beginning level Spanish by way of self-study and a weekly hour of tutoring, I thought I might be able to handle the second level in a formal classroom environment. What I hadn’t planned on was how difficult it would be for me to face the onslaught of new materials every day with limited time to process between classes.

My Spanish vocabulary was so weak that I had to spend a couple hours each morning previewing the materials I expected to be covered in class just to be able to comprehend my professor. And it worked. Almost everyday I walked home with a clear idea of what had been covered during the previous three hours. Unfortunately, with a couple hours of homework and a couple hours of preview, I really didn’t have time enough to review before I was faced with another helping of new materials. Within a few days I had a hard time integrating my fading memory of older lessons with the new materials I was learning.

Because the course was complete immersion in Spanish, I, unfortunately, found it difficult to ask questions. I was usually too tongue-tied or shy. When I did manage to struggle through asking a question, I rarely understood more than half the answer. Which is not to say my professor was insensitive. She constantly asked if things were clear. I liked her and wish I could have taken better advantage of Inma’s obvious desire to help her students learn.

As I walked home after the last lesson of a month of something that felt like past tense purgatory, I was feeling sad. I thought about how I would miss my classmates and my professor. Though I often felt frustrated with the progress I wasn’t making, I did learn an awful lot in four weeks. In fact, Susan and I spent three hours with Spanish friends the day after our classes ended and we actually managed half or more of the time in mostly comprehensible Spanish conversation.

With a couple hours of review and study each day I think that I’ll be able to convert the grammatical framework I learned into useful language skills.  It may take some months but I'll get there.  Spanish is  just more difficult than I thought it would be.

Enjoy this Estrella Damm commercial called Vale.  It’s about one man’s search for the right words in a foreign language – something we relate to daily.   Watch Vale on YouTube. 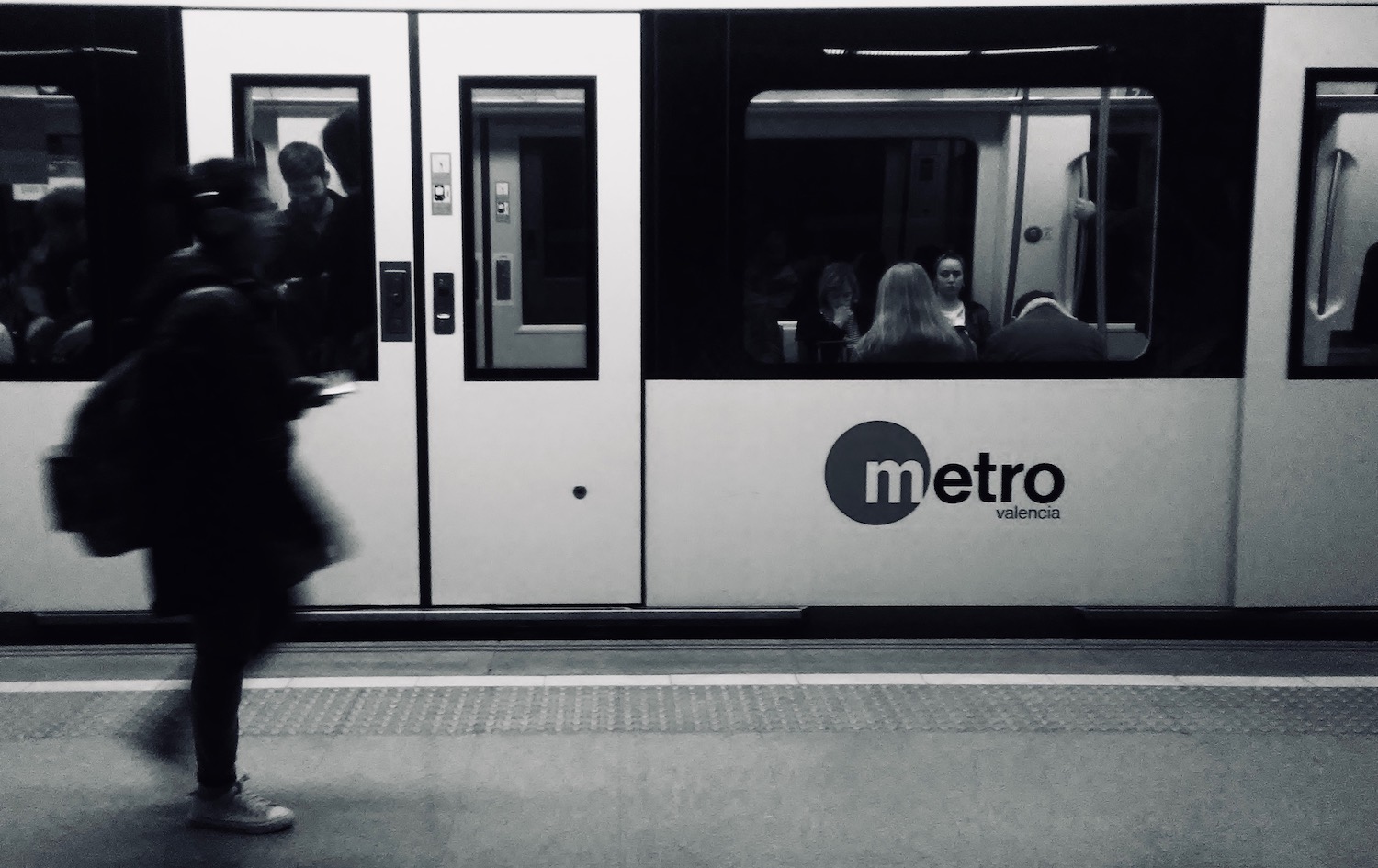