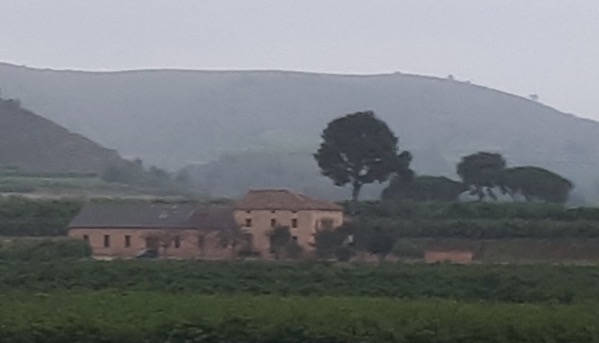 We planned for our third and final week of our Spanish Road Trip to be near Valencia so our friends Mat and Kathryn could dash home to take in the finale of Valencia’s famous Las Fallas festival.  We elders were going to remain in our rented house in Sumacàrcer and care for the pets – both ours and theirs. 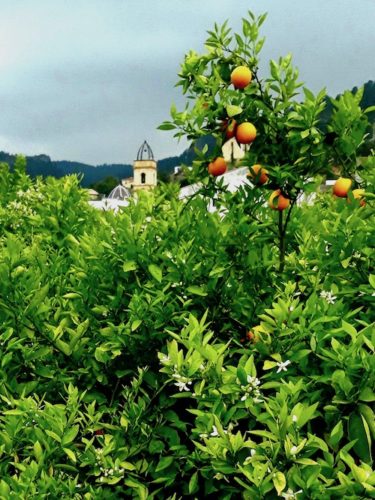 Spring in the orange groves

It was a good plan until Covid-19 arrived.  First, Las Fallas was barely into the first week before it was “postponed,” no mad dash needed.  Then, shortly after we arrived in Sumacàrcer the Spanish government issued a State of Alarm that closed bars and restaurants, places where people gathered, and included a “stay at home” decree.  At that point, Covid-19 infections were just starting to climb.

As the seriousness of the virus threat became evident, a 15-day lock-down began on Sunday, March 15.  It limited residents to leaving the house for food, pharmacy, essential work, and medical appointments only.  Fortunately, permission to walk your dog no more than 500 meters was added later.

So it ended up that we only had two days to explore Sumacàrcer, a village of 1,000 people in the heart of orange-growing country, before we were confined to the house.

The weather was fine for energetic hiking those two days.  We scrambled through orange orchards and up to the surrounding mountains.  The aroma from the orange blossoms was absolutely intoxicating.

But, lock-down reality set in on Monday.  As difficult as it is to be home and not able to leave your house, it was even harder to be someplace new with a list of places an arm long we’d planned to explore.

At this point of the article, let me just add that I know our interrupted vacation is nothing at all like the experiences many in the world are having with the loss of loved ones, livelihoods, fear of working on the front lines, and the myriad other traumas that surfaced with the pandemic.   We are grateful for our good health, a warm, cozy home during our quarantine, and the ability to purchase food in stocked grocery stores.  The effects of the pandemic are devastating in so many ways and my intent in writing this article is solely for a record of our trip.  Please know that I am not trying to minimize the sorrows it has brought upon so many people all around the world. 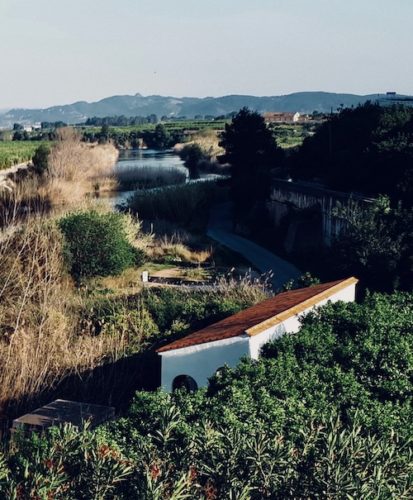 Our view for the week

We tossed around “stay or go home, stay or go home” and even considered booking an additional week just to ride out the lockdown away from other people in a rural environment.   The week wore on and we sat in the house or (lucky us) on the lovely terrace, and tried to enjoy an inside vacation.  I know we weren’t the only ones.

Mat and Kat worked during the day – they build websites.  Jamie and I exercised, read, cooked, just the usual homebound activities.  The evenings were filled with board games (we really love Santorini), Oculus Quest virtual reality games, movies, streamed entertainment from André Rieu and the Johann Strauss Orchestra, and lots of enjoyable conversations.

We were fortunate to have our dogs with us on this trip.  The four of us took turns walking them.  Some of us may have strayed a little farther than technically allowed.  But, it’s hard to be good when there is no one watching!

I was "privileged" to make two trips to the supermarket.  Because my sense of direction is so bad, I even discovered inadvertently the town actually has two supermarkets.  The first market I shopped in limited entrance to five people at a time and filled my order while wearing masks and gloves.  The other market took a much looser approach. It felt as though shopping there was like driving without a seat belt.  It just felt so risky to me.  I couldn’t wait to leave. It’s funny what you get used to.

Ultimately, we decided to leave one day early.  We absolutely had to.  We’d eaten all of the oranges our host left for us (horrors!) and couldn’t replenish our stock without resorting to orchard theft.  I was to buy eight more oranges on my last market day.  The markets were well stocked with everything except oranges.  It wasn’t because they were sold out but because they don’t sell oranges in Sumacàrcer.  The clerk said, “We don’t sell oranges because everyone in town has their own orange trees.”  That did it.  Time to go home. 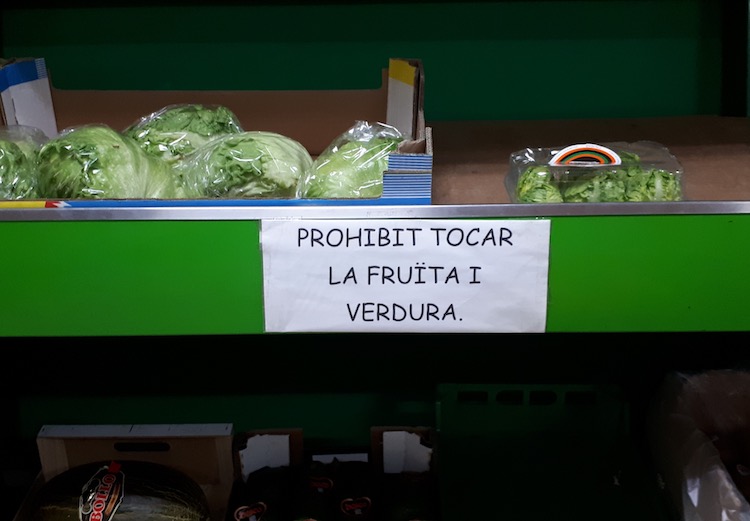 We drove back to Valencia on Saturday, March 21, just shy of one week of lockdown and on a day when confirmed Covid-19 cases in Spain neared 25,000.   Of course, that’s nothing compared to where we are as I write this but the increase in one week was a definite sign of what was to come.

I placed an extremely high stakes bet with Mat that we would be stopped on the way home.  We had a Spanish script all worked out and I kind of wanted to write about the experience.  But, we’ll never know what would have happened.  On the way into Valencia we saw only one roadblock for the traffic leaving town. So I lost a whole euro!  But Mat was happy.

After dropping us off, Mat and Kathryn managed to miss roadblocks within the city.  Returning to one's “habitual home” was clearly allowed in the notices but they didn’t really want to test that instead of unloading their stuff, returning the rental cars, and getting to the supermarket before everything was sold out.

So, that’s the anti-climatic ending to our three-week road trip.  It was an unhurried, laid-back journey with delightful traveling companions who we cherish.  We were so grateful for the opportunity to visit places only accessible by car.  It opened our eyes to how our trips could be more satisfying when they include a lot more Lizzie (TBDE) and more nature to boot.  I do believe a Spanish driver’s license is in Jamie’s future.

Here's what we missed and will return to when the timing is right.

Sumacárcer sits a little to the east of and just outside La Canal de Navarrés, a region that includes the eight pueblos of Anna, Bicorp, Bolbaite, Chella, Enguera, Millares, Navarrés, and Quesa.  This region is known for its hiking, rock climbing, cycling and water sports as well as the villages that overhang the Rio Jugar canyon.

Without a car it is difficult to reach the Canal de Navarrés.  There is one outbound and one inbound bus from Valencia each day on Autocares Togsa but it operates only on weekdays in July/August. It takes about an hour and 20 minutes. And you have to be prepared to spend the night.  It is also possible to take the C2 Cercania Train to L’Enova-Manuel with a half hour taxi ride to Anna. It would be expensive – probably €100 for a  round trip.  It's better to visit this area with a car.