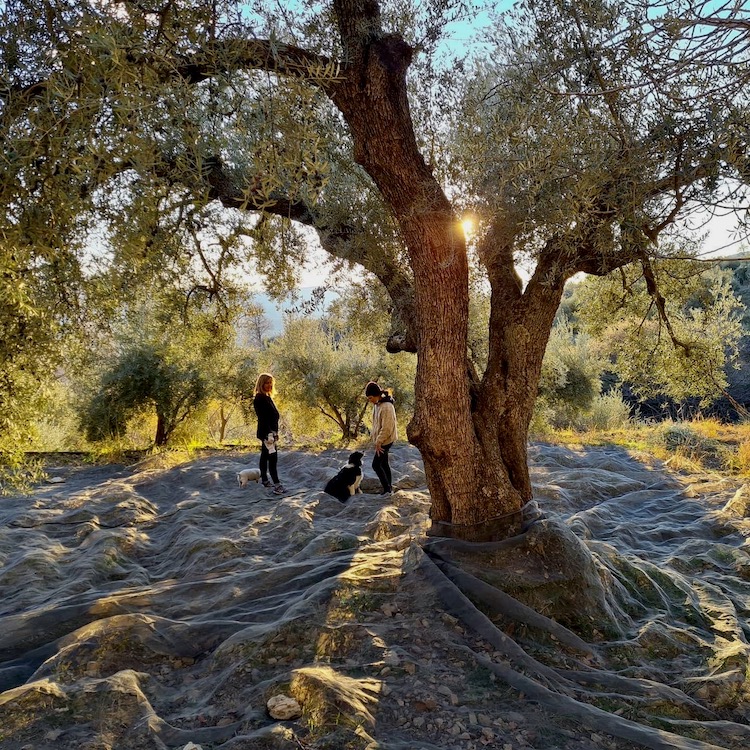 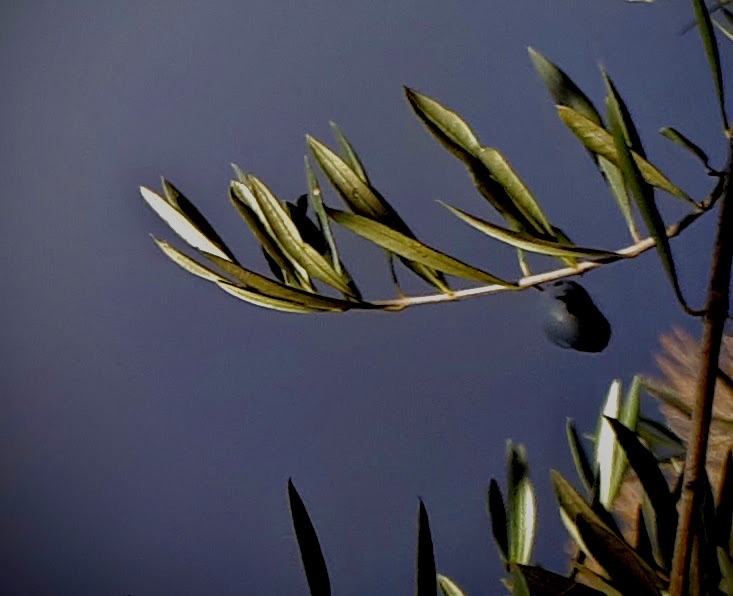 The hills are alive with the sound of …whack, whack, whack.  It’s the second time in just two months that we’ve heard that now familiar whack.  In early November it was the almond harvest and we had a go at that.  Now, at the end of December it’s time to harvest olives. 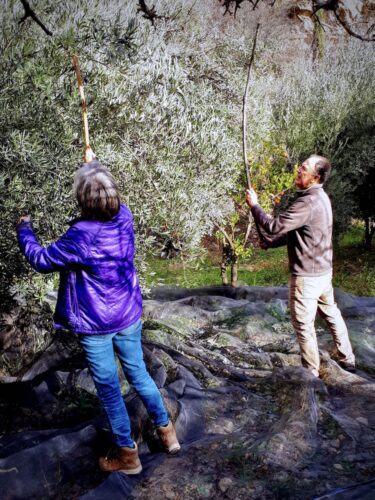 I took all my almond whacking experience and set to on an olive tree with the same gusto.  Then, I learned that olive trees require a more gentle touch. Instead of whacking the branch, you rake your pole down the branch, essentially rubbing the olives off.  Big nets are spread out beneath the tree to catch the harvest and create an especially slippery trip hazard as well.

It’s hard work anytime you’re working with your arms above your head.  I got the definite feeling I’m not the farm girl I used to be.  Well, let’s see, that was some 30+ years ago.  No surprise there then.  We only stripped four out of fifty or so trees during that first session giving us the full flavor of squishing olives under our feet until the net became slippery, kneeling on olives until our pants were stained, and laughing at each other’s technique.

Harvesting always includes hearty meals in the field, conversation, and fun. In our case it was almost half past three before we got to the harvesting part of the job.

The olives we harvested are destined for the village mill to be cold pressed for their oil.  In order to bring the freshest olives for production harvest days usually end with delivering the day’s collection to the mill.  Even at about 50 kilograms, our four bags were an embarrassingly small amount so they were saved for delivery with the next day’s pickings.

I’ve been told that there’s at least one olive oil mill in every Alpujarran village, but don’t trust Google maps to help you find them.  The Mairena mill isn’t on the map but I’ve been there so I know more than Google.  At least about this topic.

Adolfo, the mill owner, has been making olive oil for more than 40 years under the brand Almazara Santa Isabel.  The word almazara means oil press in English and of course, Santa Isabel is Saint Elizabeth. 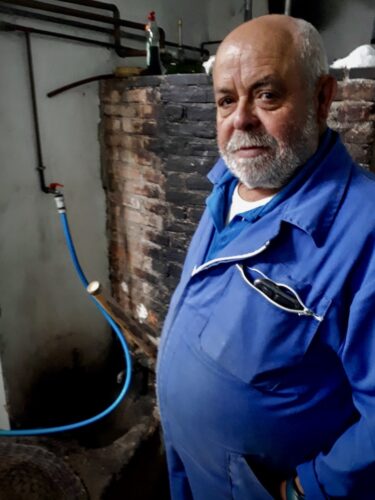 Adolfo inherited the mill from his uncle and knew the process well before he took over.  He’d like to retire soon and is looking for a ready buyer.  Interested?

The work is full time during harvest season - late December through February.  Equipment maintenance and cleaning begin in October and the work continues throughout the year with sales.

Like many people who live in a small village, Adolfo wears more than one hat.  He’s also the village taxi driver.  He was part of the gig economy before the gig economy had a name.

An interesting aside, a few boys and younger men have Adolfo as a middle name in Mairena.  It seems that some expectant mothers put off the hour and a half drive to the hospital in Granada a bit too long and Adolfo has midwifery skills too.

At Adolfo’s mill the farmers co-mingle their olives for a share based on the weight they’ve provided.  Adolfo’s payment is what’s known as the “miller’s cut.” I love how David, the co-owner of Las Chimeneas described the miller’s cut and I don’t want to leave out a word:

“The exact percentage is locked within parameters far too arcane for me to penetrate, though seemingly uses a calculation based on bushels, pecks. gills, fathoms....furlongs....you name it, but not any coinage recognizable to the 21st century.  Essentially it's witchcraft.  Suffice to say Adolfo thinks it's always too little for him, and too much for the growers.”

We watched Emma and David drop off their first bags of olives for processing.  The electronic scale flashed 123 kilos.  That’s not what a serious farmer would bring in but it’s good for a hobby farmer.  David received a piece of paper that recorded the weight.  Over the course of the harvest he’ll have many such pieces of paper that he can exchange for olive oil in the coming year.  The person who holds the paper holds the credit and we all know how easy those are to lose.  It really adds to the “miller’s cut” if you’re not careful with your bits of paper.

With a right to the percentage of the oil rather than an outright purchase of olives, farmers don’t know until the end of the harvest what their actual oil yield will be.  Again, in David’s words, “until the harvest is finished you have to suffer the ignorance of what the final tally will actually come out at…”  Apparently the farmer’s yield varies from year to year averaging 17 liters per 100 kilos of olives.  In other reading I learned that it takes 4-5 kilos of olives for every liter so this is comparable, minus the miller’s cut and samples that must be sent to a laboratory.

The mill is prepared to take in olives every day during the harvest season.  Somewhere between 80 to 100 people will drop off bags of olives in multiple trips depending on how many trees they own.  All those olives will be pressed into approximately 40,000 liters of olive oil.  If a share is more than the farmer needs, it can be sold back to the mill because other people need more than their share.  Also, there are visitors like us who come through and want to buy oil.

The Mairena olive mill is functional but not beautiful.  It is so unlike any food production facility you would encounter in the U.S. today.  The floor is slick.  Different floor levels and pits with nary a railing in sight create unbelievable trip and fall hazards.  And every step of the production process is out in the open.  It was a sight to be seen and we got to stand around and take it all in.

The outdoor machinery area separates the olives from their leaves and twigs, weighs, and washes.  In the beautiful symmetry of things, nothing goes to waste - all the leaves and twigs are bagged for animal food.

From the weighing machine, the olives are transported inside to a giant macerator which turns the olives into a black paste or “mash” - about the texture of yogurt.  Then the mash goes into a tank where water is added for cleansing.  The mash/water combination is allowed to rest while the oil mash separates from the water and impurities.  The mash is then extracted for the next step, which is the actual press. 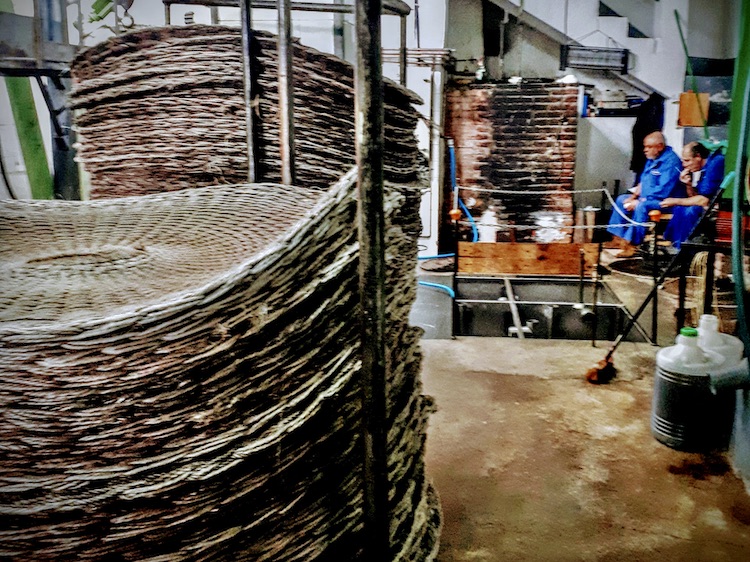 The olive mill in Mairena is about 100 years old.

Very few olive oil mills still do the press in the traditional manner which is to slather mash onto mats and then mechanically press the heck out of them.  The Mairena mill is the only one in the Granada province that uses antique presses.  The presses in Adolfo’s mill are over 100 years old.  The equipment handles 230 mats at one time and these get layered on the central pole of the press.

The mat material represent the only change in the process.  Today’s mats are made of nylon.  European Union regulations require the use of nylon mats for sanitary reasons.  In the past, the mats were made of esparto grass, the same grass used to make the soles of the famous Spanish Espadrilles (shoes.)  By the way, not all shoes called espadrilles are made with esparto grass these days.  Like esparto mats they are a thing of the past.

After the press, the oil is captured in a vault that feeds into the giant holding tanks.  And the process is done. Except for dividing up or selling the oil.

After the pressing, the mats contain the waste of olive skins and crushed pits.  The dried waste is removed to create another usable byproduct.  It can be burned like peat for heat.  We watched them use it in the mill furnace. It also can be put back on the land as fertilizer or it can be used as sound insulation.  The crushed pits are irregular and create effective sound proofing.

Olives are brought in daily by independent farmers and processed daily by Adolfo to keep the quality high.  Because the neighbors share this oil they have a vested interest in bringing only freshly picked, quality olives.  No one gets away with bringing moldy, diseased or old fruit.  Neither are the olives refrigerated for days and weeks while waiting to be pressed. 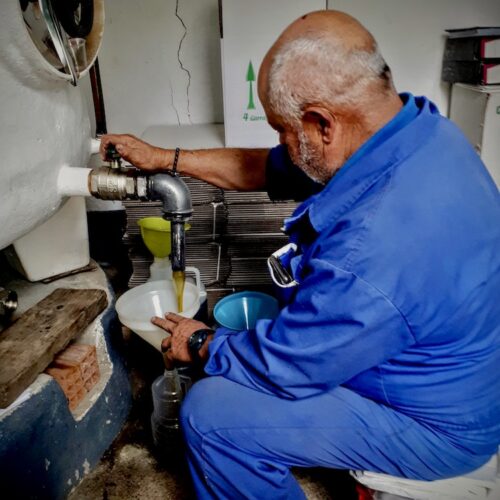 A virgin olive oil results from any form of extraction by mechanical means (which includes the press or the centrifuge) and no heat.  While some manufacturer’s additionally label their virgin olive oil as a “cold-press” or “first-press” oil, this is redundant labeling.  Adolfo’s mill is one of the few mills that retains the traditional process of actually pressing the olives rather than putting them through a centrifuge to extract the oil, something that is done in all commercial operations.

If you are accustomed to purchasing extra virgin olive oil, know that it requires the same process as the virgin olive oil but an acidity level that is less than 0.8% by EU standards.

What increases the acidity level?  Olives that are stored too long or those that split open and oxidize before being processed.  It’s really a quality measure that is defined by the acidity level.  In Mairena, monitoring by the community of farmers ensures high olive quality so the olive oil coming from Adolfo’s mill is probably extra virgin oil.

Like wine, people purchase specific brands of olive oil for the consistent flavor.  Some oils are estate, meaning olives are grown and processed on the same estate, or mono-varietal, meaning the olives are all one type.  When a mill receives olives from a hundred growers there are many different varieties of olives and the end result is a robust, dark green, bold oil.  To accommodate different tastes, a more delicately flavored oil is siphoned off the top and sold for salad dressing or baking.

Spain is the largest producer of olive oil in the world, producing half the world’s total olive oil and exporting 46 percent of that production.  In addition, a lot of the olives grown in Spain are bottled in Italy and sold as Italian oil.  The average annual production of olive oil in Spain over recent years has been around 1.75 million tons.

Historians believe that olive trees were brought to the southern Iberian Peninsula by the Phoenicians when they invaded and founded the city of Cadiz in 1101 BCE.  The oil supported the Greeks, Carthaginians, Romans, and Visigoths before the Muslim Conquest of 711 AD brought advanced agricultural methods of terracing and irrigation - methods that remain in use today by small, independent farmers.

Can you buy bad olive oil?  You bet!

If the bottle you buy says “refined” on the label that means heat and chemicals have been added to adjust the flavor.  The recommendation is to stick with virgin or extra virgin olive oil sold in a dark, opaque bottle.
For more information about Spanish olive oils, take a look at this site.