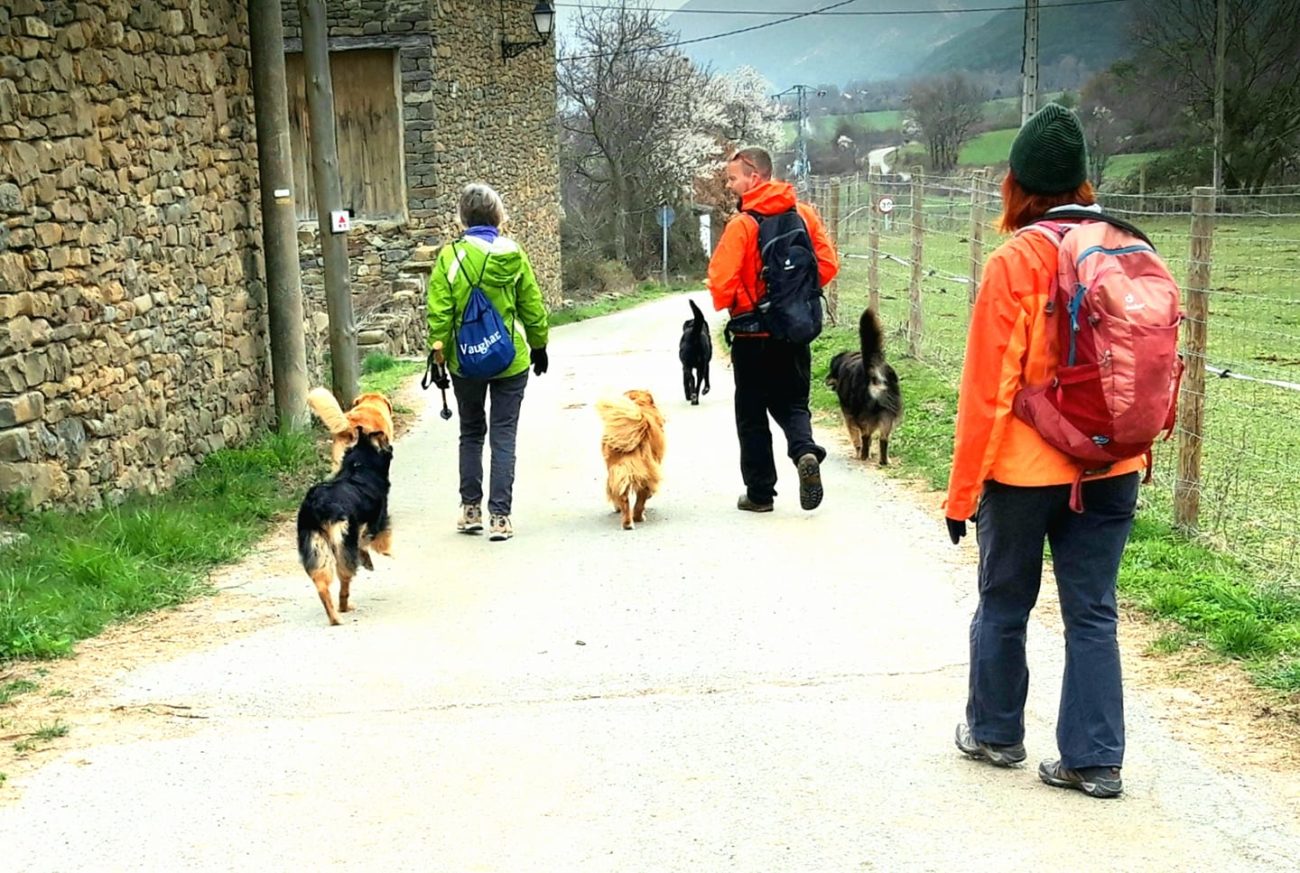 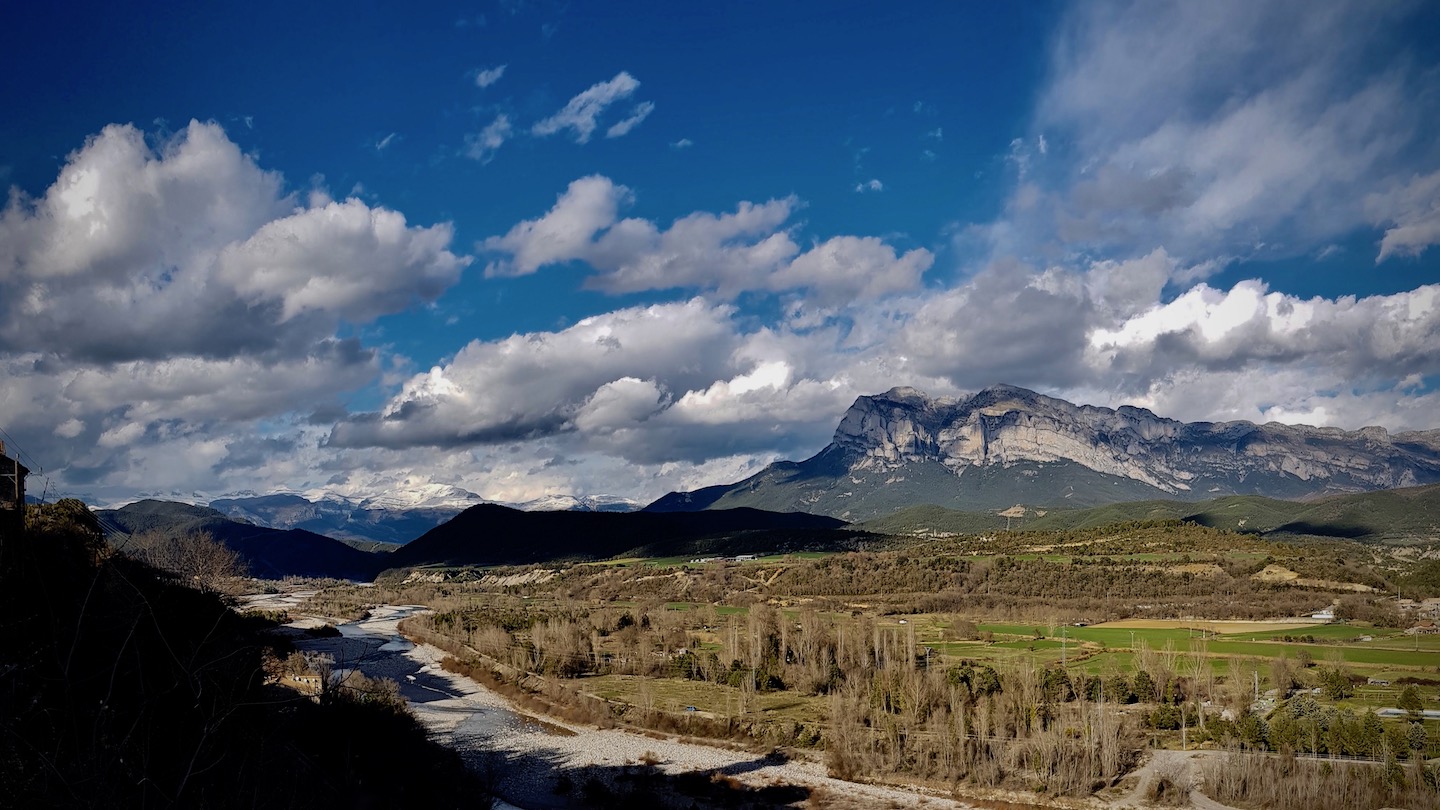 Late last year when our friends Mat and Kat asked if we’d like to escape from Valencia with them for three weeks in March, we jumped at the chance.  Not only would we miss the incessant noise and unruly crowds of Las Fallas, the four of us enjoy similar outdoor activities, cooking plant based whole food meals, and stimulating conversations.

On the last day of February we packed up the cats and dogs, the computers and servers Mat and Kathryn would need for work and we set out.  We’d already decided to spend one week each in the quiet villages of:

We rented a Casa Rural in Fiscal for our first week’s base.

Fiscal is a small village in the Aragonese Pyrenees.  Though the year-round population is less than 350, there are many weekend/vacation homes.  Our AirBnB host told us that many young families have been returning to Fiscal in the last couple years.

In March, three of the four local restaurants were closed for the season.  The local grocery store, Supermercado Bellosta, is small but the market kept us supplied with all the basics for in-home meal preparation.

Fiscal proved to be a good staging area for the rest of our week in the Pyrenees.  There are plenty of hiking destinations directly accessible from the village including easy walks along the river Ara and to nearby villages.  Then, for hardy souls, there are a couple of steep, steep walks up to hermitages that overlook the Ara valley.  We spent the week hiking and visiting nearby towns and villages.

On our first morning in Fiscal we planned a 14 km walk to the deserted village of Jánovas, abandoned in the 1960s but now struggling back to life. So many villages become ghost towns when the train routes relocate, young people move to the cities for jobs, or competition from industrial farms dry up family farms. What was the story of Jánovas? Why was it making a comeback? And why was the Romanesque arch from the Jánovas church gracing the plaza in Fiscal? 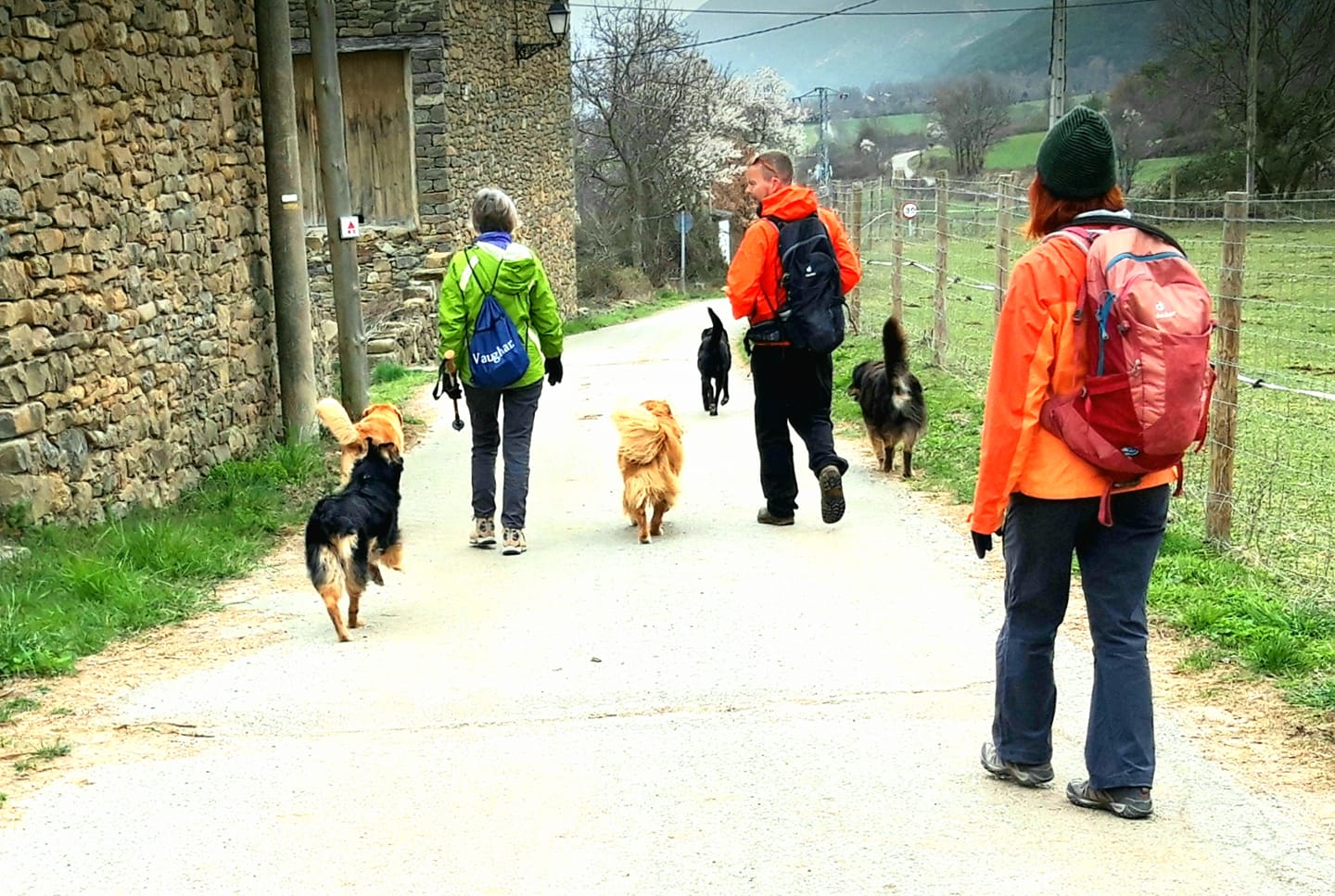 We love walking with our dogs.  Didn't expect the local welcoming committee we got though!

To get to Jánovas our route passed through the tiny villages of Borrastre, San Juste, and Ligüerre de Ara. Along our way, liked pied pipers, we collected up seven tag-along farm dogs. Most joined us and our two dogs for a kilometer or two before dropping off to return home. But three of them stayed with us for the entire way between Borrastre and our destination, a distance of 13 km. Our furry entourage prompted friendly people to greet us warmly while others held tightly to their dogs lest they join our ranks.

It turns out the village wasn’t really abandoned.  The citizens of Jánovas as well as those of Lavelilla and Lacor - some 150 families in all - were “relocated” by the Spanish Government in order to build a dam on the River Ara.

This was in the 1960’s.  The government offered little to no relocation compensation but was willing to apply plenty of strong-arm methods to move the citizens.  In 1966 the school closed.  Later, power and water were shut off, olive and fruit trees were cut down, and irrigation systems were destroyed.  Explosives were used to demolish houses next to inhabited homes in order to intimidate the hold-outs.  After 20 years, the last residents moved out in 1984 but the dam project never proceeded.  Finally, in 2005 the project was abandoned for not meeting European Union Standards.

Then after 40 years the Spanish agency responsible for water projects - Confederación Hidrográfica del Ebro. Finally provided financial compensation to the families of the ousted villagers.  They get to turn rubble back into a community.  A few homes have been rebuilt and others are underway.  There’s signage telling the sad story of Jánovas posted on one of the few standing walls of an original home.

And those tag-along vagabonds?  They stuck around Jánovas when we left, but were back in their home village the next morning.  One or two of the dogs joined us for parts of shorter walks whenever we passed through Borrastre. 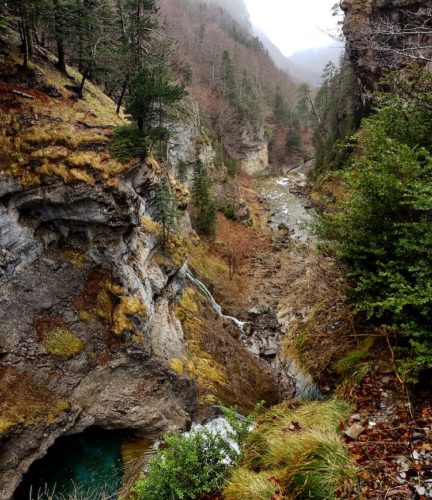 On our spectacular hike in Parque Nacional de Ordesa before the snow.

Spain’s first national park, Parque Nacional de Ordesa, was established in 1918.  The park sits high in the Pyrenees and together with the eastern part of Parc National des Pyrénées in France forms a World Heritage reserve of more than 30 thousand hectares.  The deep glacial valley of the Ordesa and surrounding 3,000-metre peaks tempted us to try a popular 17 km trail known as the Cola de Caballo (Horse tail) waterfall.

Alas, the weather gods had a different plan for us.  As we started our hike, fog turned to rain.  As we gained elevation the rain turned to sleet.  And finally, snow turned us around early.  Even though we had good boots and parkas, neither of us had waterproof pants or gloves with us.  After a couple of hours of walking we were just starting to get cold.  That and Jamie’s deep respect for the risks associated with high elevation hiking convinced us that maybe visiting a waterfall, no matter how beautiful, wasn’t worth risking hypothermia.  Coming down the mountain all we could think of was a hot beverage in a bar we saw near the park entrance.  Alas, it was a summer concession only.  We were out of luck when it came to hot chocolate but we did see some beautiful sights.

Aínsa, a well preserved medieval village, lies at the confluence of the Ara and Cinca Rivers about thirty kilometers downstream from Fiscal.  The town was the capital of the old Kingdom of Sobrarbe and in the 11th century was incorporated into the Kingdom of Aragón.  The walls that surrounded the town in the Middle Ages remain mostly intact today.

The historic town is small enough to explore in an hour or two.  We climbed the bell tower of the Romanesque church of Santa Maria using the smallest staircase we’ve ever seen.  Our experience was more like spelunking than climbing a medieval bell tower but the view was splendid.

We spent on interesting afternoon in Aínsa.

Jaca is just 30 minutes from the French border and 130 kilometers to the famous city of Lourdes.  It’s the site of an ancient Roman fort situated at the crossing of two great trade routes and was the capital of the Kingdom of Aragón until 1097.

The mixture of Spanish and French architecture had us wondering what country we were in.  For a small town of only 12,000 people, it is certainly built to accommodate tourism for winter sports and summer mountaineering.  It even boasts two ice skating rinks –one Olympic and one recreational.

We ended up visiting the town of Jaca twice.  Our first visit was on a rainy afternoon.  We went to see the Citadel, a fortress first built in the 16th century.  It is the only intact example of a squat pentagon shaped fortification from the early Renaissance when the use of cannon and firearms made high-walled medieval castles vulnerable.  There is a drawbridge over a dry moat that is currently the home for a deer herd.  Besides learning about early Renaissance fortifications, we also had a lot of fun in the Playmobile museum included with our entry fee.

There were hundreds of figures in this scene of Hannibal's invasion.

On our second trip we passed through Jaca on our way to the monastery of San Juan de la Peña. The remote 10th century monastery was built under an overhanging rocky cliff.  It looks like neither foes nor the elements should have been able to destroy it, yet there was a fire that lasted 3 days in 1675.  It forced the monks to abandon the site.  One year later in 1676 the monks began construction at a new site in an open meadow atop the cliff.  Maybe they were tired of living under a giant rock.  Life at the monastery continued through the 18th century, until 1835 ecclesiastic politics and financial troubles forced its abandonment.  The entire complex was rehabilitated by the government of Aragón and includes a large interpretive center.

Two elements of our visit were quite interesting to Susan.  First, several of the early kings of Aragón were entombed in the old monastery.  In the past couple of years the bodies were disinterred for anthropological study. The cranium of one of the kings showed the blunt force injury that caused his death but also the hole drilled in his skull to release pressure on the brain.

Second, the chalice believed by some to be the actual Holy Grail is also tied to this Monastery.  This intrigued Susan because the chalice held at the monastery is the one gifted by King Alfonso the Magnanimous to the Valencia Cathedral in 1438 where it still resides.

The locals are happy to share the pastoral beauty of their region.

The Aragonese Pyrenees:  Definitely Worth a Visit in Any Season

We could have spent our entire time walking the trails in Parque Nacional de Ordesa but the Aragonese Pyrenees offer so much more.  We loved the historic sites, the friendly people and  dogs.  We punctuated our days with  morning and afternoon walks straight out of  the village and into the countryside.  All four of us agreed that we'd definitely be coming back to this region of Spain.  Lizzie (TBDE) and Stanley loved their visit too, so don't leave the  dogs behind.