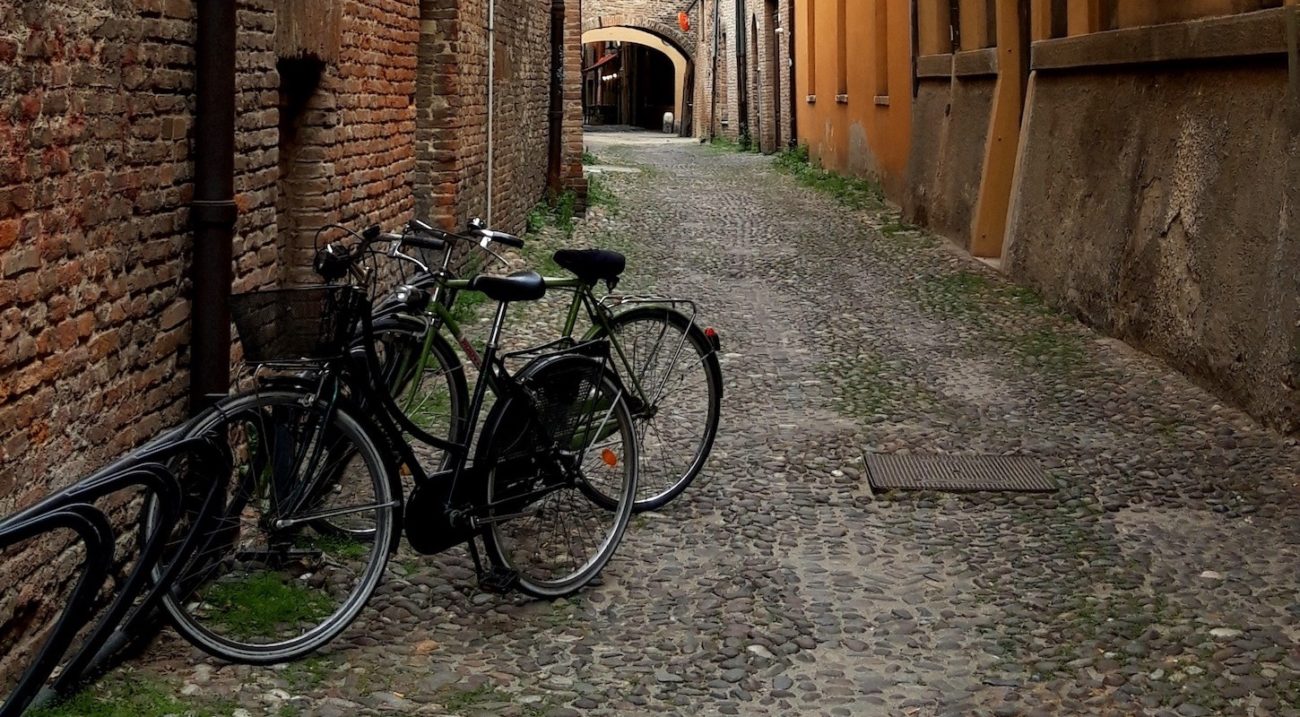 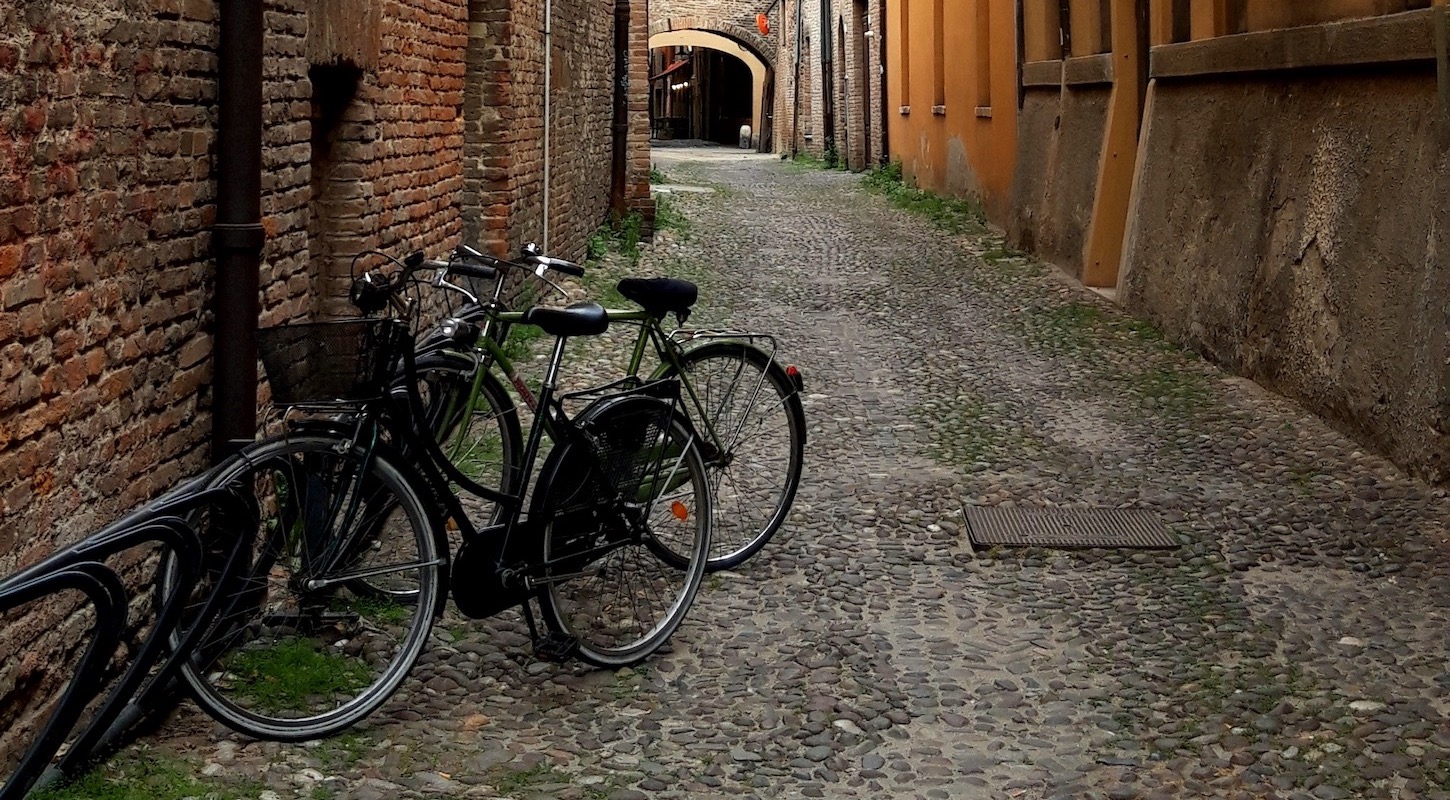 Ferrara was to be the beginning of a five-day, self organized cycle journey through the Po Delta Regional Park.  We spent so much time focusing on planning the cycling, we didn’t have a strong feeling about the cities we’d be seeing.  I had no idea I was going to fall in love with Ferrara or that Jamie and I would see ourselves living here someday.

Ferrara, with a population of about 140,000 was just my speed after busy Bologna.  The city was at the forefront of urban planning during the 15th and 16th centuries of the Italian Renaissance and its well preserved center makes for a nice tourist backdrop.

Better yet, there’s no graffiti or tagging on the historic structures or in the historic center.  While I occasionally like street art, I get a little riled up at the destruction of private property and Jamie thinks it’s outrageous to vandalize historic buildings with spray paint.  It takes a lot of city pride to ensure that its World Heritage designation is honored.  We were impressed. 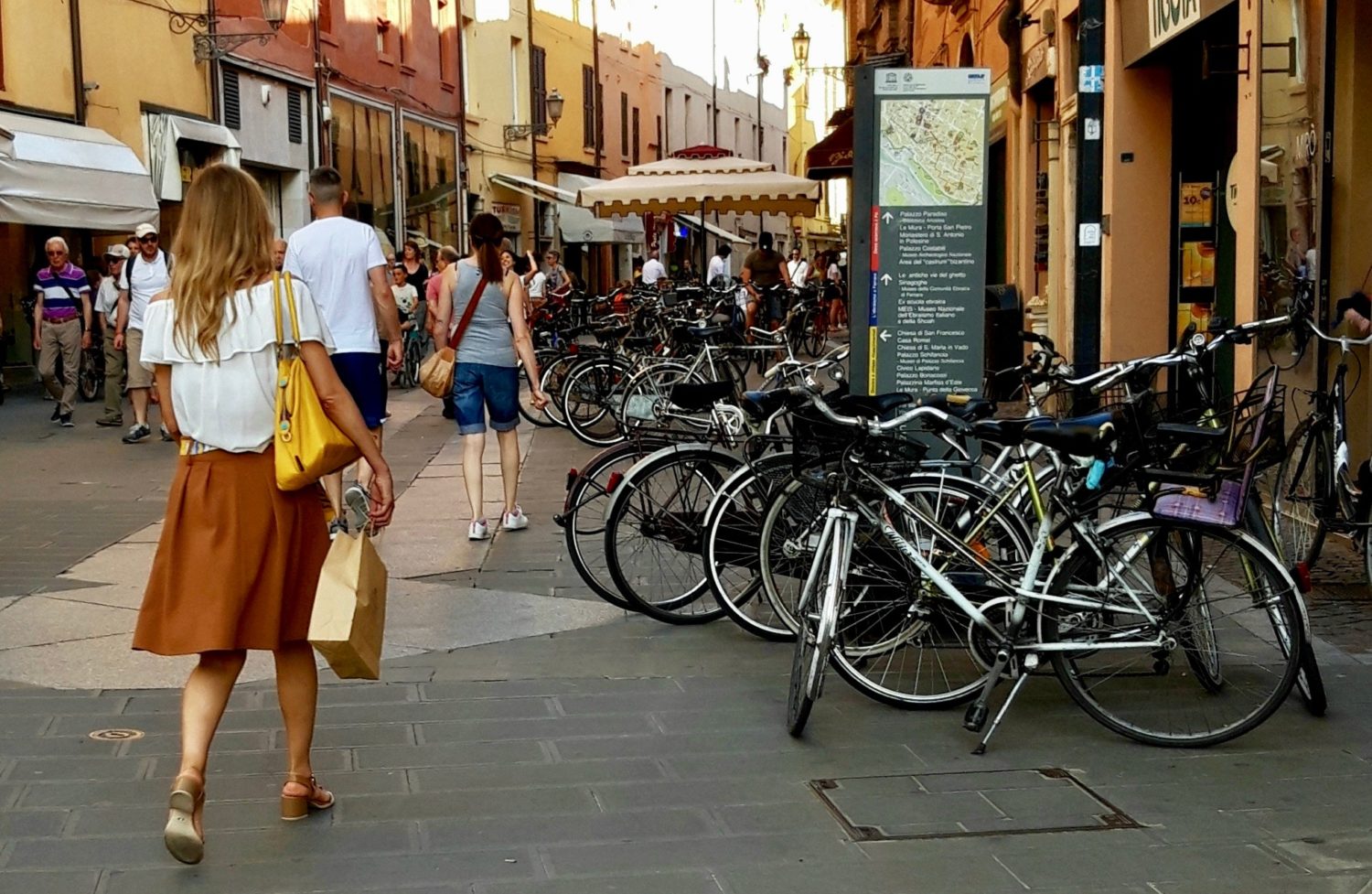 Ferrara, a city of bicycles

But what I really loved was the vibe of today’s Ferrara.  It’s gentle, warm, friendly, and just big enough to offer lots of stimulation but keep a calmness that is important in high-density cities.  Everyone – young and old – travel on bicycles.  It reminded us of Amsterdam. In fact, Alex, our host at the Maxxim Hotel, told us that on a per capita basis, Ferrara is second only to Amsterdam in bicycle transportation. I  don’t know where that figure came from but I believe it.  It didn’t hurt that there was a 100K Bike Night Event going on that same weekend produced by Witoor.

Another nice point for us, Ferrara is big enough to have TWO vegan restaurants and that’s saying something for Italy.

Where to lay your head in Ferrara

Once we arrived, it was hard to leave our lovely hotel (but we eventually did).  The Hotel Maxxim opened just seven months ago in a renovated 15th century palace, once the residence of an Earl or a Count or someone connected to the Este Family.  It is quite a charming place.  I imagine it was even better for us than when the Earl or Count lived there.  We had hot water and air conditioning.  The breakfast was the best we’ve ever had.

The Maxxim Hotel just began a bike rental service for full or half day so you can be one with all the residents of Ferrara.  We’d already rented our bikes in Bologna and the hotel  let us keep them in their secure storage garage just a block from the hotel.  So nice.

What to see in Ferrara 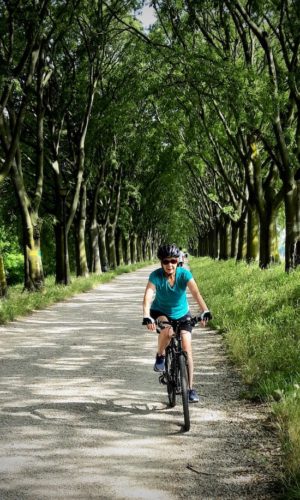 Cycling atop the city walls. No mistake, this is on the top of the walls.

The Medieval City Walls that enclose the entire historic center were a highlight for us. Fortunately, we were on bikes and could travel the entire 9 kilometer circle, moving from the jogging/cycle path in a park-like setting on the outside of the walls to the shady, tree lined forest alameda on top of the walls. If the residents we encountered enjoying the area’s paths, benches, and park amenities were any indication, these former defense walls are put to constant good use today.

Piazza Trento y Trieste is the principal plaza in Ferrara for events and people watching. We spent a lovely Saturday evening there watching everyone come to the city center by bicycle, meet with friends, listen to music, and take in the beautiful summer evening.

Castello Estense was built in 1385 by the Este Family, the Italian Dynasty that received Ferrara as a part of the spoils of war.  Their castle guarded them from domestic problems as well as papal aggression as the Medici Popes were intent on taking control from the Este Family.  And they eventually did!  The power struggle ended when the pope established papal rule in 1598.  The Este Family control of Ferrara was no more.

Delizie Estensi or “Beauties of the Estense,” is a grouping of some thirty villas and hunting and summer retreats built in the vicinity of Ferrara. Delizie actually means a dwelling built for entertainment and leisure.  These structures are symbolic of Estense culture on the natural environment.  Fewer than 10 are open to the public today and it’s unclear if tours are available in English.  But, if you speak Italian, this may be of great interest. 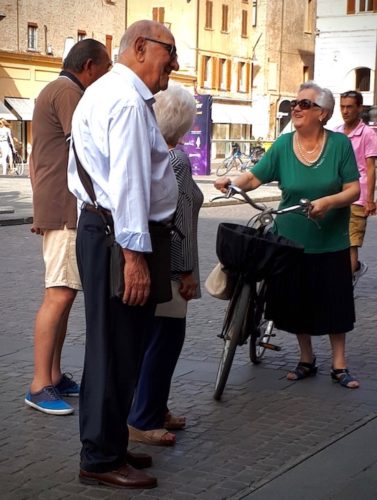 Evening on the piazza

Palazzo Schifanoia is one of the Beauties of the Estense that is right in the city center.  The word Schifanoia means to “escape from boredom.”  The palace went into decline with the departure of the Este Family and restoration didn’t begin until 1821.  In 1898 it became the Schifanoia Civic Museum housing the Museum of Ancient Art.

Open Tuesday – Sunday, 9am – 6pm, 6€ for adults or 7€ with a paired admission to the Cathedral Museum.

Orto Botanico is the Botanical Garden of the University of Ferrara.

The National Archeological Museum (Museo Archeologico) is housed in the Palazzo Costabili, a partially constructed palace that today houses an exhibit dedicated to the Etruscan city of Spina that once existed near Comacchio.

Open Tuesday through Sunday 9:30am – 5pm. Cost is 6€.  (NOTE: We didn’t tour this museum but we did tour the Comacchio Archeological Museum, an absolutely exquisite museum housed in an 18th century hospital. Their exhibits in English, German, and Italian tell the ancient story of the Po River and include the importance of the lost city of Spina.)

You can find a lot more information on the Ferrara and the Po River Delta here.

There are several departures per day from Bologna Centrale the city center train station.   You can book tickets in advance on the ItaliaRail website, on the Loco2 website, or just do what we did and buy your ticket at the station.

We met brother and sister Alice and Johnny Marzouka when we stumbled upon “Veg” their “bistrot vegetariano” our first afternoon in Ferrara.  What a lucky find.  Not only did we enjoy an excellent falafel lunch, we learned about an intriguing relationship between the two vegan restaurants in Ferrara.  Johnny and Alice are of Palestinian heritage. Their competitor is an Israeli.  But the two restaurants cooperate as much as they compete. And the afternoon we were there, most of the patrons at Veg were also loyal patrons of La Vegana.  Alice summed it up by telling us that by making and sharing good, ethical food they have learned good people are good people, no matter where they are from.

And Jamie learned why he’s been having trouble when making falafel.  Don’t cook the garbanzos ahead of time, just soak the heck out of them beforehand. 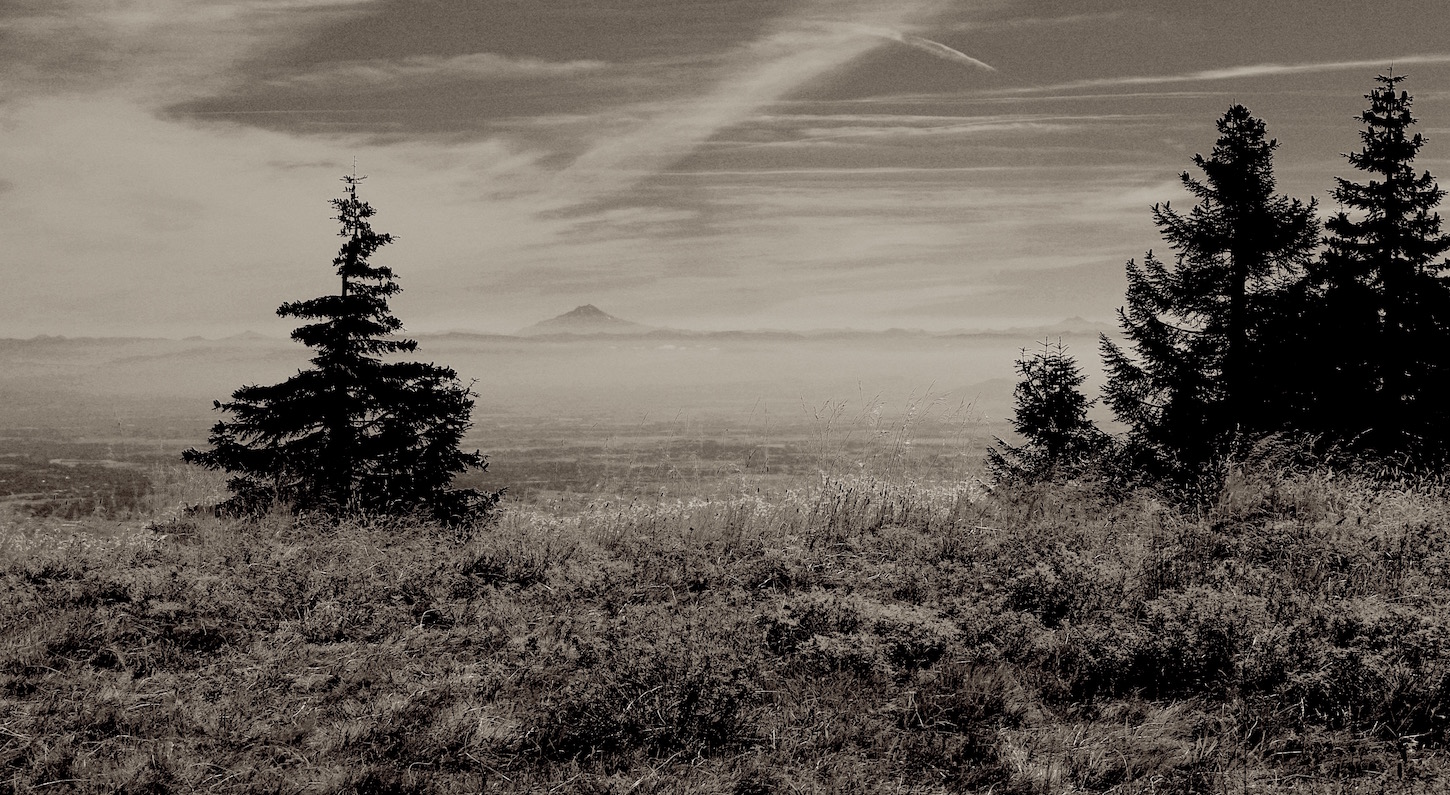