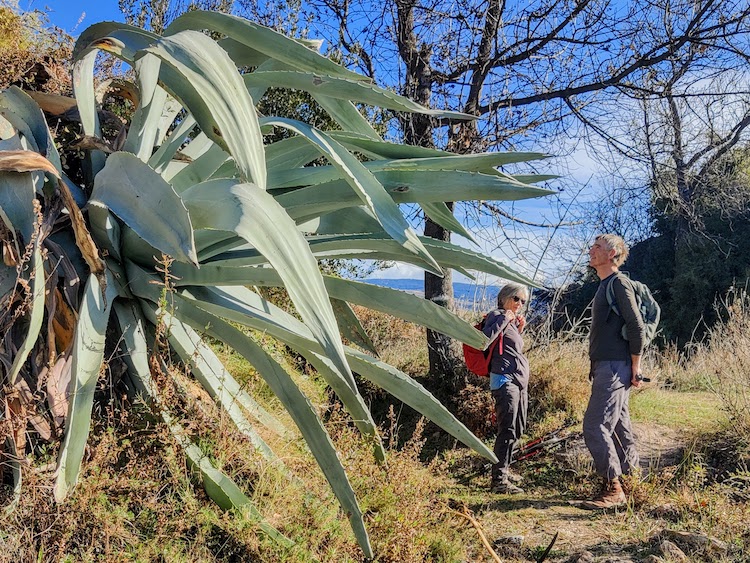 “We ought to take outdoor walks, to refresh and raise our spirits by deep breathing in the open air.”

It was a zen moment that autumn evening. —a full moon rising alongside a coppice of golden-leaved poplars perfectly complementing the sunset’s afterglow —a full sky marvel, replete with ten thousand hues of cherry blossoms and ripe peaches.  Susan and I were maybe half a kilometer from finishing our first walk in the Alpujarra.

We’d climbed uphill from the village into the Nature Reserve, an area of old rain-fed agriculture fields, now abandoned and gradually reverting to nature.  Moon gazing served a second purpose, allowing us to catch our breath.  Recently arrived from the flat plains of sea-level Valencia, the steep climbs and descents above 3,400 feet of elevation proved a bit challenging even though the walk had been short.

That was the first of November 2020.  Little did we realize how much walking we’d be doing in the coming months, nor how beneficial all those walks were to be.

So where exactly are we?

We’ve been staying in a small village, one of the four small villages in the municipality of Nevada.  The village is nestled on the south slope of the Sierra Nevada mountains at about 3,450 ft above sea level.  Mairena is about in the middle of the area traditionally known as La Alpujarra, an area about 80 kilometers wide that is bounded by the crest of the Sierra Nevada mountains on the north and the Mediterranean Sea to the south.

Nestled into the southeast corner of the Iberian peninsula, the Alpujarra is notable for its unique ecology.  Its terraced agriculture zone is watered by a traditional system of irrigation that’s fed by snow melt from the high mountains.  The system dates back more than a thousand years.  This high-altitude oasis of greenery stands in dramatic contrast to the arid foothills below.

Of cultural interest are the fifty-odd villages which were the last stronghold of the Spanish Muslims after the Castilians conquered Granada in 1492.  Many have retained their traditional Berber architecture - terraced clusters of box-shaped houses with flat clay roofs.  The style is still common in the Atlas mountains of Morocco.

The Alpujarra is a popular destination for walking tours.  Though the foot traffic is nothing compared to the Camino de Santiago, the GR-designated trails are equally long and due to the combination of climate and terrain might be more challenging.  GR stands for Great Route in English, Grand Recorrido in Spanish and Grande Randonnées in French.

The GR-7  covers 1,900 kilometers in Spain from Tarifa on the Straits of Gibralter to the Pyrenees on the French border.  Even though the GR-7 passes right through our little village, Susan and I haven’t really been able to get out of our municipality (Nevada) as much as we would have liked.  There have been so many local perimeter confinements because of Covid. 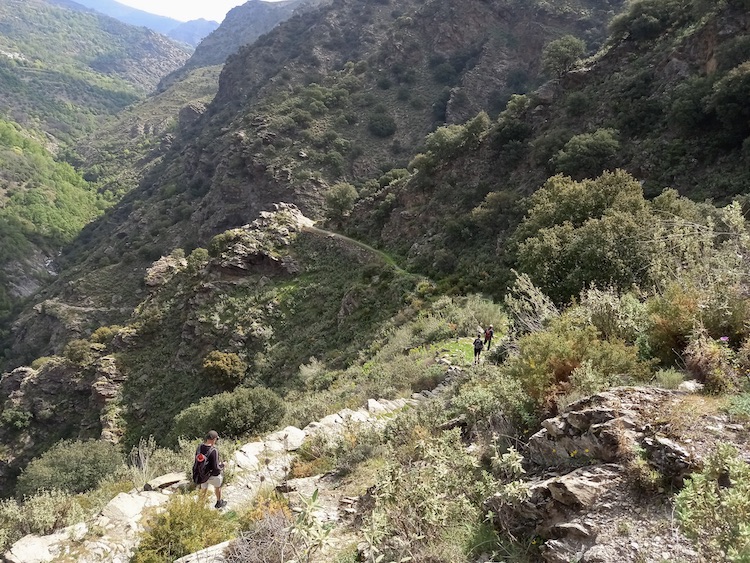 We ended up using the GR-7 as the backbone for many day hikes.  And that was plenty of walking.  Although our municipality encompasses only four small villages, it also extends up to the ridge line of the Sierra Nevada and includes a big portion of the national park.

Another Grand Recorrido, the GR-240, known as the Sendero Sulyar after the Muslim name for the Sierra Nevada, is the longest circular trail in Spain.  This 300 km route must be more popular than the GR-7 because the days we tackled the Ruta Medeival segment was the only time we encountered other walkers in the more six months we’ve been here.

There are also plenty of short and medium distance options to tempt us to get out and stretch our legs.  We poke around the old donkey trails and herding paths from before there were roads, and there are plenty of country lanes with little or no traffic.  We never worry about getting lost because there’s always a familiar village within sight.  Of course, there have been times when we’ve had to scramble up terraces and scurry across someone’s finca to get back home, but that was mostly part of the fun.

We were in the Alpujarra from the beginning of November until the end of April.  We never experienced the brutal heat and summer drought typical of the region.  In fact most of our days had ideal weather conditions for hiking. We always carried plenty of water and we always came home with empty water bottles. 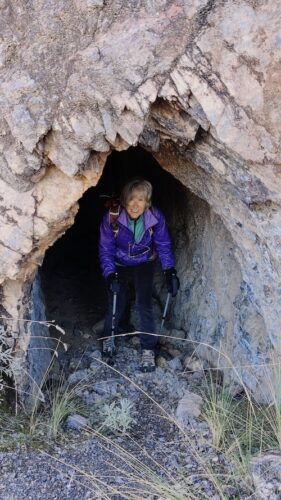 Our expectations regarding trail conditions were based on the decades we spent hiking in North America.  The main trails, like the GR-7, are usually well marked but trail maintenance is up to the local communities.  The farther we got from a village, the more difficult it was to keep track of a trail, especially during Covid when the trails tended to be overgrown.

The villages that dot the hillside are all close to a river or stream.  The rivers and streams have cut deep, narrow gorges, called barrancos, that slice across the landscape every couple of kilometers.  There have been so many times when we had our eye on a village, anticipating a chance to have a cold drink.  Then we come upon one of those barrancos and realize that the crossing is two or three kilometers up stream.

We’ve been in Spain long enough that it didn’t surprise us, but North America walkers should realize that there isn’t a stitch of this landscape that hasn’t been dominated by human activity for centuries.  Even the high alpine zone has been ditched to collect irrigation water and grazed.  Everywhere we walked we encountered evidence of people working the land just as they have done since pre-Roman times.  Don’t expect a wilderness experience.

In our little village of Mairena, the people are still growing olives, almonds, and citrus on the terraces and using irrigation systems put in place ten centuries ago.  There are still a couple of traditional sheep and goat herders, but the practice is dying out.  Almost everyone who lives here has a plot of land to grow food for their own needs.

If you come to the Alpujarra for a walking vacation, you have to realize that you’ll be hiking through an agricultural landscape.  Your Spanish hosts aren’t really interested in recreational walking.  They’re too damned busy trying to eke out a living.  And they are trying to modernize the ancient farming system.

You won’t go far before you come across industrial plastics.  Many of the old Islamic irrigation channels are lined with plastic pipes these day.  Almost every holding tank has a plastic liner.  Discarded plastic is all too common. 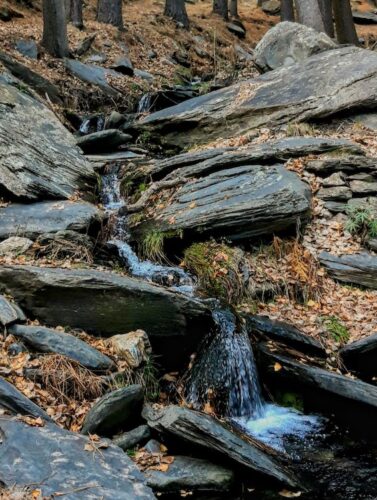 But the big controversy is the proliferation of plastic greenhouses.  Some of them cover more area than a typical village.  For the first time since the building of the old irrigation system and the terracing that started back in the tenth century, human activity is changing the landscape in a big way.  And, it’s not as pretty.

Don’t get me wrong, it isn’t all bad. Susan and I have deeply enjoyed out time here.

The list goes on, but my favorite?  Our Sunday morning walk takes us to a quiet, stony precipice overlooking the valley of the Nechite River.  It’s a perfect place to listen to the wind, to spot soaring birds of prey or to watch the dips and swirls of swifts and swallows.  We can take in a vista that encompasses five villages, the furthest of which is a long afternoon’s walk away. But the best thing is sharing a flask of tea with Susan and talking about hopes and dreams, or sometimes about memories and the times we’ve shared.