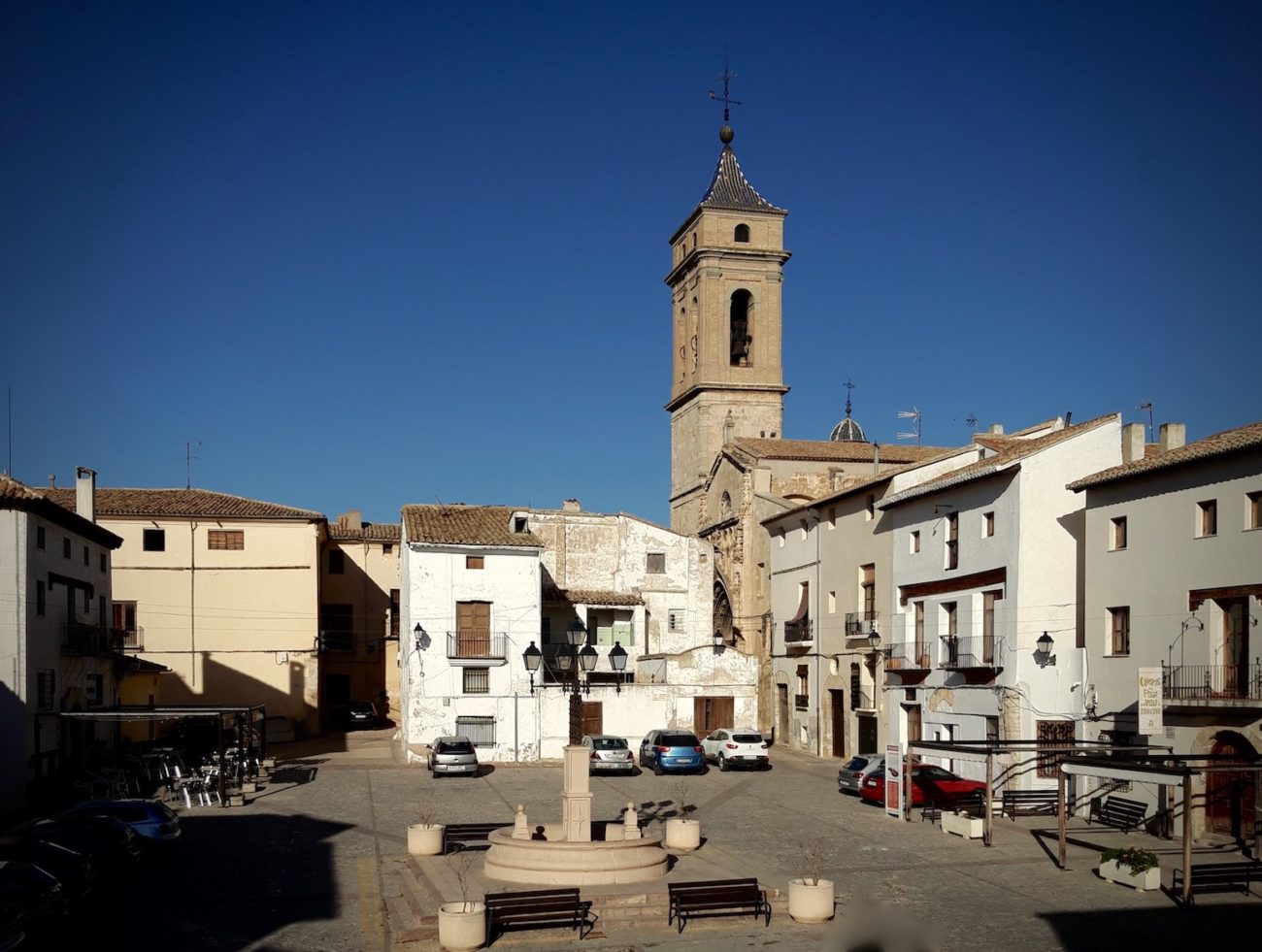 After spending sunny January days roaming the streets of Valencia,  Susan was ready to get out of town for a day.  I had no objection, so we hopped aboard the Cercanias C3 train for the slow ride to Requena.

For me, there’s nothing quite like a train journey.  I like the gentle swaying of the carriage and the picnic lunch we’re sure to carry.  The train slowly climbs to the plateau after clearing the industrial wastelands that seem to sprout around every train terminal in Spain.  There’s the anticipation as the train approaches our stop.  Then, in a minute or two, you’re there, on the platform, the train is pulling away and it’s time to take one another by the hand and head out to see how our day will turn out. 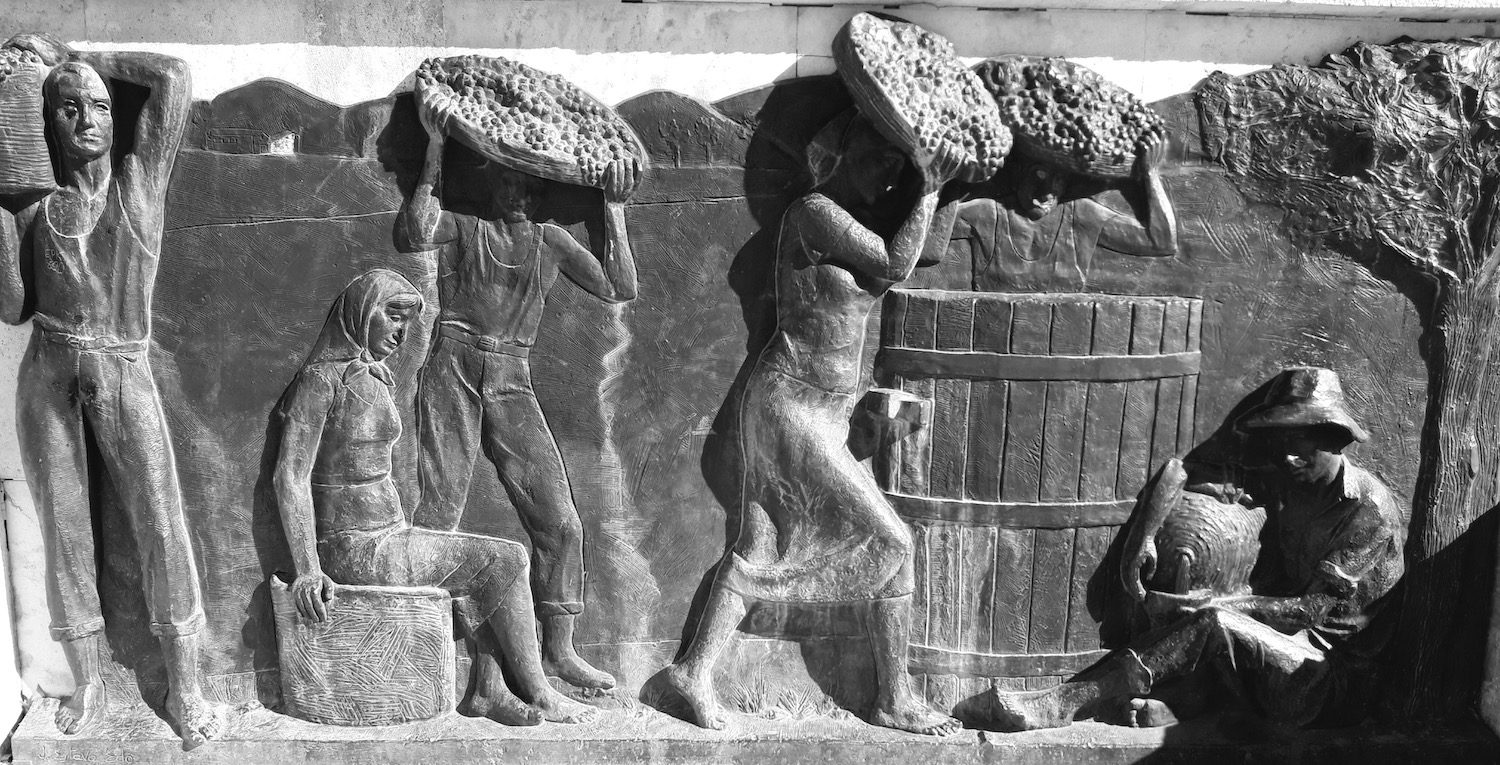 That day in Requena, we had a slow, more or less aimless stroll in mind to be capped off with a visit to a historic bodega.  What we didn’t anticipate was that we’d be so enchanted with this peaceful municipality of about 20,000 people.

We started our meander by heading loosely toward the town plaza.  But, we were quickly distracted at Avaneda de Arrabal when we spied a monument a couple blocks off in the opposite direction.  The sun was shining and the air was still so off we went to check out A la Vendimia or “to the vintage.”  Four bronze bas relief sculptures at the base of the monument let us know these folks take their wine culture seriously.

Back on our path toward the central plaza we rambled along the quiet avenue ranked by plane trees and wound our way through narrow passages of the old town.  I love it when we find a quiet, sunny plaza and Requena’s Plaza de Albornoz didn’t disappoint.  We just sat and soaked up the February sun while waiting a few minutes for Ana who hosted our visit to the historic Murviedro Bodega. 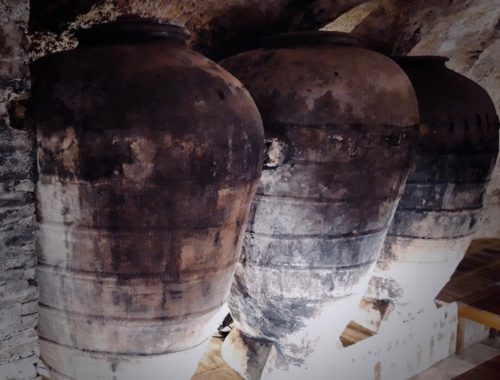 These clay vessels, over 6 ft tall, were used to age the wine.

Of all the wineries we’ve visited, I have to say this visit was uniquely intriguing.  Murviedro has been producing wines since 1927 and the museum is a beautiful showcase for the history of the region and their wines.  The tour told the story of the subterranean cellars or “wine caves” that date back to the Muslim period (9th to 12th century).  They were originally used for storing grain.  It wasn’t until after the Reconquista in the 1200’s that the caves were converted to wine production.  Some time in the 1700’s the houses above the caves were demolished to build Plaza de Albornoz and the debris was used to fill the cellars.  Then in the 1970’s the community began to recover these historic caves.  The Murviedro wine museum is the most recent addition for tourists, opening in the fall of 2017.

Ana, our host, led us through the labyrinth punctuating her commentary with scores of fun facts.  Her enthusiasm for her work was contagious and created a small but happy group of seven in the tasting room.  We enjoyed a rosé so good we regretted bringing home only a single bottle and a smooth gran reserva that we did purchase to our carrying capacity.

We gave ourselves three hours  in Requena.  It is probably enough time for most visitors but we wished we'd had an additional hour or two to enjoy another glass of wine on the plaza.

The cave tour is offered in English, French, and Spanish.  However, the tour is limited to a small number of participants so it is advisable to make advance reservations.  Our ticket included the tour of the wine caves, two tastings and a bottle of wine, all for 7€ each.  To make a reservation, call 96 295 59 98 or email:  bodegahistorica@murviedro.es

A Bit About Requena

Requena and its neighboring community Utiel are best known for the wines they produce from an ancient grape variety.  The Bobal grape, whose origin is lost in antiquity, has been cultivated in the region since at least the 1400’s.

Though it is part of the Valencia Community much of the local culture of Requena is more closely affiliated with that of Castilla – La Mancha.  For example, they don’t celebrate Las Fallas, and they don’t speak Valenciano.

We used our Tarjetas Doradas to purchase train tickets on the Cercanias Train Route C3 from Estación del Nord in Valencia.  I think the best seats are on the right hand side going (and left hand side returning).  We met a trio of Irish students who came  from Valencia on an intercity bus for 10€