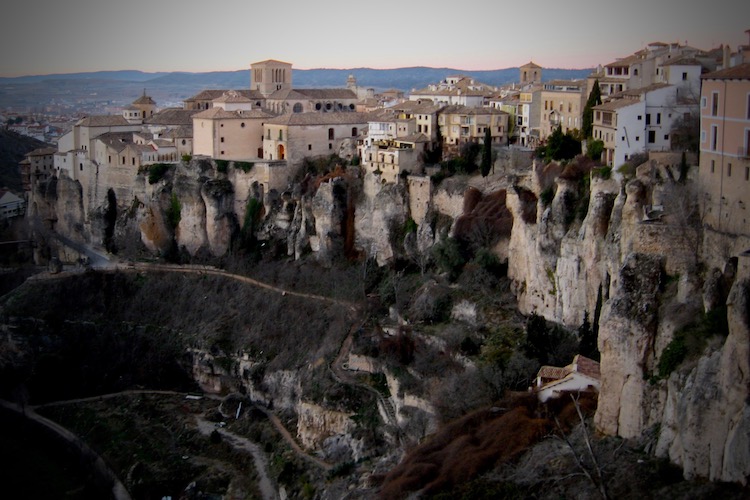 Cuenca has a rich history that dates back to the Muslim domination beginning in the early eighth century. Then there’s the breathtaking Karst geology of the La Mancha plateau. It’s not surprising that Cuenca is recognized as a UNESCO World Heritage Centre for how the walled medieval town blends into the natural landscape.

People who love outdoor recreation will love Cuenca too. Even in January we met cyclist, trekkers, and rock climbers who were enjoying the surrounding countryside.

Cuenca is an ideal destination for Day Tripping from Valencia thanks to the high-speed trains that run between Valencia and Madrid. Catch the early morning AVE train from Valencia’s Joaquin Sorolla AVE station and in less than an hour you’ll be disembarking in Cuenca. You could have as many as 12 hours for exploring this intriguing town and return on the late train that departs around 9 p.m. That’s not enough to see and do everything that Cuenca has on offer, but we can imagine filling a warm, summer day visiting.

If you’re visiting in January like we did, you might prefer to turn your visit into a relaxed getaway of one or two nights.

Here in Valencia, we’ve become accustomed to sunny winter days but as our departure day drew nearer it was clear that we might end up with a bit of cloudy weather. With Cuenca’s fascinating history and intriguing geology on display from nearly every location, we thought we’d be covered no matter the weather.

And we were right. We had two nights and two full days in Cuenca to capture the best of the outdoor and indoor experiences.

So What Did We See and Do?

Let me just say, that as far as Jamie is concerned there is plenty to enjoy about Cuenca without setting foot in a museum or heading off with a tour guide. The old city is so charming that one might spend the day wandering the lanes or taking a jaunt along one of the nearby trails and your time will be well spent.

We began our trip at the Tourist Information office in Plaza Mayor only a few dozen steps from the bus stop. They armed us with city maps and plenty of information to digest. After spending a couple hours musing over our options while we enjoyed a vegan lunch in a nearby restaurant, we selected several museums and a couple of countryside treks we thought we’d enjoy. Based on a friend’s recommendation, we also chose a side trip to La Cuidad Encantada, the enchanted city, where Karst limestone formations have been intriguing visitors for centuries -- even Conan the Barbarian (scenes from the Arnold Schwarzenegger movie were filmed in part of this private park).

If you hanker for history or a touch of culture, there are at least 10 quality museums and of course the twelfth century cathedral that anchors Plaza Mayor. We chose to visit two museums.

The Museo de Arte Abstracto Español, is one of the most attractive small museums we’ve ever visited.

We were introduced to the art collection of artist and collector Fernando Zóbel (1934 – 1984) who suggested in 1963 that Cuenca use two of the three Casas Colgadas, the city’s iconic hanging houses, to showcase his collection of contemporary art.

Susan found the visual flow from gallery to gallery, the gorgeous stone floors throughout, and the breathtaking views from every window rivaled, and often eclipsed, her appreciation of the art on display.

Since 2016 admission has been free for all visitors to the museum. That was a surprise!

Within steps of Plaza Mayor, the Museu de Cuenca is another museum that turned out to be free. Artifacts collected from archeological sites around Cuenca and throughout the province are on display. Different galleries feature everything from coins, cooking tools, weapons and hunting tools, to sculpture and décor. The Roman sculpture and architectural pieces are reminiscent of a trip to Italy. 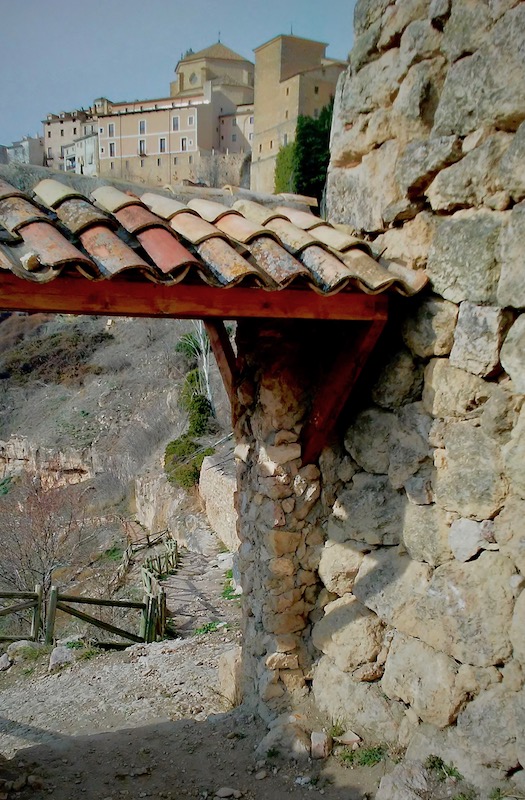 The Trails Around Cuenca Offer Interesting Views of the City

Walking is one of our favorite ways to get to know the towns and villages we visit. And when we can easily get out into the surrounding countryside we’re even happier.

Cuenca, “the city where history and nature flower in perfect combination,” gets high marks from us in this regard because there are three well-marked trails (known as senderismo) that you can take from the old city.

Our first morning in Cuenca we found Sendero Periférico de las Hoces de Cuenca (The Canyon Periphery Route, SL-CU 10) when we were out looking for a good photo point.

We loved walking this trail. It essentially circumnavigates the limestone ridge upon which the old city and castle are built. The trail dips down to the River Júcar where it joins the Júcar River Canyon Route (SL-CU 11) for a short way and then winds its way back to the old city near the cathedral. There are many wonderful views of Cuenca and the surrounding hills from this route.

SL-CU 10 is easy to follow. With 210 meters of elevation gain, it requires one steep, but fairly short climb and an equally steep decent. The route is 4 kilometers long and takes about two hours to complete.

Ruta de la Hoz del Río Júcar (Júcar River Canyon Route, SL-CU 11) is also an easy 4 kilometer long, circuit route that allows you to get a bit further out into the countryside. It takes about 4.5 hours to complete and has 288 meters elevation gain.

You can pick up a much longer route that crosses the province, Sendero Oriental de Castilla-La Mancha (GR 66), from Plaza Mayor and follow it up to the summit of San Cristobal Hill for a panorama view of Cuenca. This 2 km trip will take about an hour for the climb and a few minutes for your return.

January is very much the low-season in Cuenca. We often felt like the only visitors during our stay. The paucity of visitors meant we had a low cost opportunity to stay at the Parador de Tourismo. 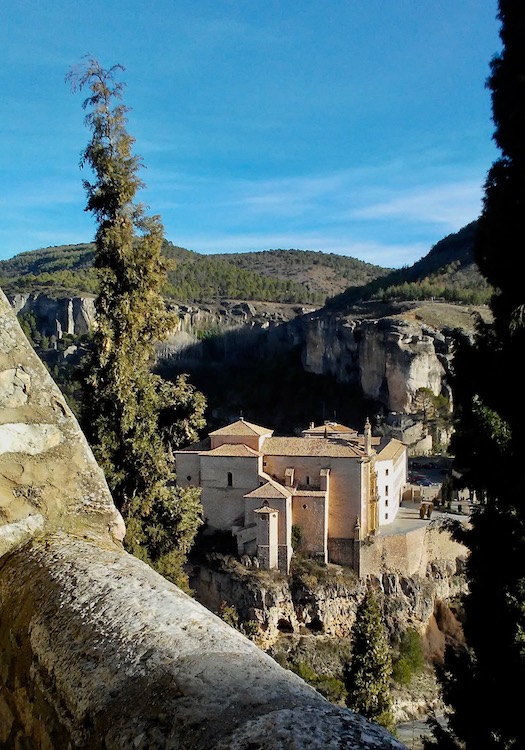 A 16th century convent is now the Parador Hotel

This Parador hotel is a renovated sixteenth century convent and just a few minute walk from Plaza Mayor across the Puente de San Pablo, a pedestrian bridge that spans the gap between two limestone ridges high above the Rio Huécar.

Our room faced out across the canyon toward the old city and we enjoyed a view of subtly lit canyon walls each night.

Another hotel in the old city, the Leonor de Aquitania, came highly recommended by a Cuenca native we met in Valencia. Unfortunately, it was undergoing renovations during our visit and we couldn’t investigate further.

With our commitment to a vegan lifestyle, dining in Cuenca was a bit of a problem for us. We found restaurants where they’d wrangle grilled vegetables, potatoes, and salad but the portions always left us a little hungry. Maybe that’s not a bad thing.

We had lunch at Tomates Verdes Fritos (Calle Sanchez Vera 13) in the lower city. They include a couple of vegetarian/vegan items on their menú del día, but at €13.5, our meals were not anything special.

Breakfasts, on the other hand, were delightful. The folks at Restaurante San Juan on Plaza Mayor were warm and welcoming and it was fun to share our daily coffee, croissant, and tostada in the winter village atmosphere.

The Enchanted City: A Day Trip from Cuenca

Our friend Jenny, who isn’t easily impressed, recommended we visit The Enchanted City during our Cuenca excursion.

La Cuidad Encantada is a privately owned park that features an easy, mostly level hike around strange and interesting rock features typical of “Karst” landscapes where the soluble limestone bedrock has washed away. In this case it all started about 90 million years ago when the sea retreated and the limestone formations were uplifted.

There are several tour companies that offer trips to the Enchanted City.  We chose Nattivus.com for a four plus hour excursion with an English/Spanish speaking guide at a cost of €25 per person.

The tour was much more than transportation. Our driver and tour guide, Cristian, kept up a continuous banter there and back. He shared his insights and observations about the region of Castille-La Mancha, the beautiful forested region of Parque Natural de la Serranía de Cuenca, the long-term Spanish drought, and the early arrival of the pine processionary (Thaumetopoea pityocampa) caterpillars that cause harmful reactions in humans and other mammals. Then he made La Cuidad Encantada so much more interesting than the signage.

We had a good tour and recommend both Cristian and Nattivus.

Getting to Cuenca from Valencia

There are two train stations in Cuenca that are served by different RENFE systems. We tried both options.

The high speed AVE option between Valencia’s Joaquin Sorolla station and the Fernando Zóbel train station in Cuenca was a quick and enjoyable ride. Our train reached speeds of 300 kph, much faster than any train ride we’ve had before. Our train departed Valencia on time and was about 5 minutes late arriving in Cuenca. 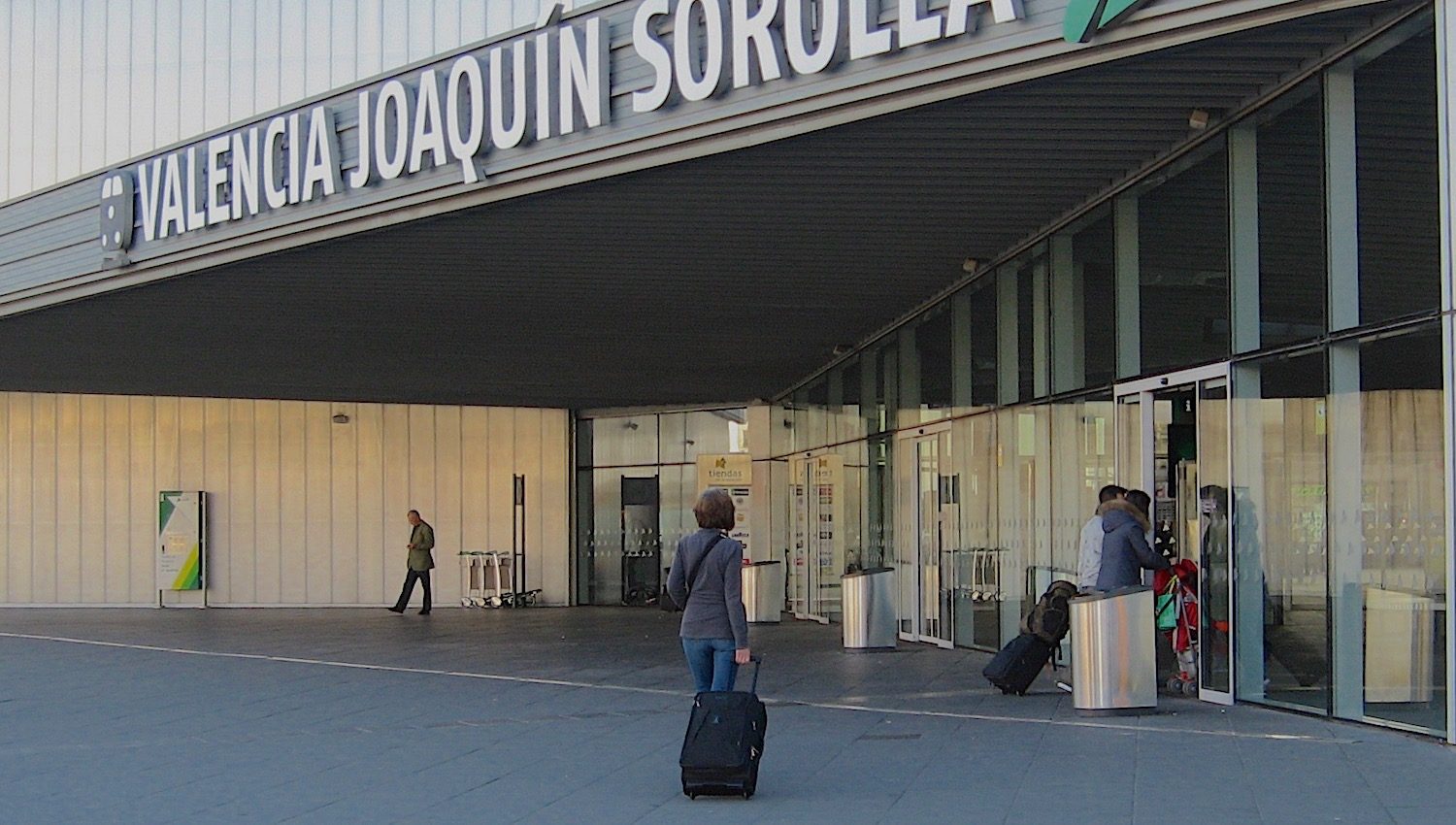 The High Speed AVE Train from Valencia takes less than an hour.

If you take the AVE Train, a Cuenca city bus (Route #1) runs between the Fernando Zóbel train station and the Plaza Mayor every 30 minutes. The fare is €2.15. This is the best deal and allows you to see the new city, parks, and rivers before dropping you off in the upper city where you’ll want to begin your sightseeing.

The regional train that runs between Valencia’s Estación del Norte and Cuenca’s old train station is a slower, lower cost option. This train runs on a different right of way than the AVE train.

We thought the experience, taking in the scenery on a slow journey with multiple stops in rural villages, was worth our while. Unfortunately, our train was frequently delayed and what was to be a 3½ hour journey ended up taking a bit more than 4½ hours.

Here are some helpful websites and articles to help you plan your trip.