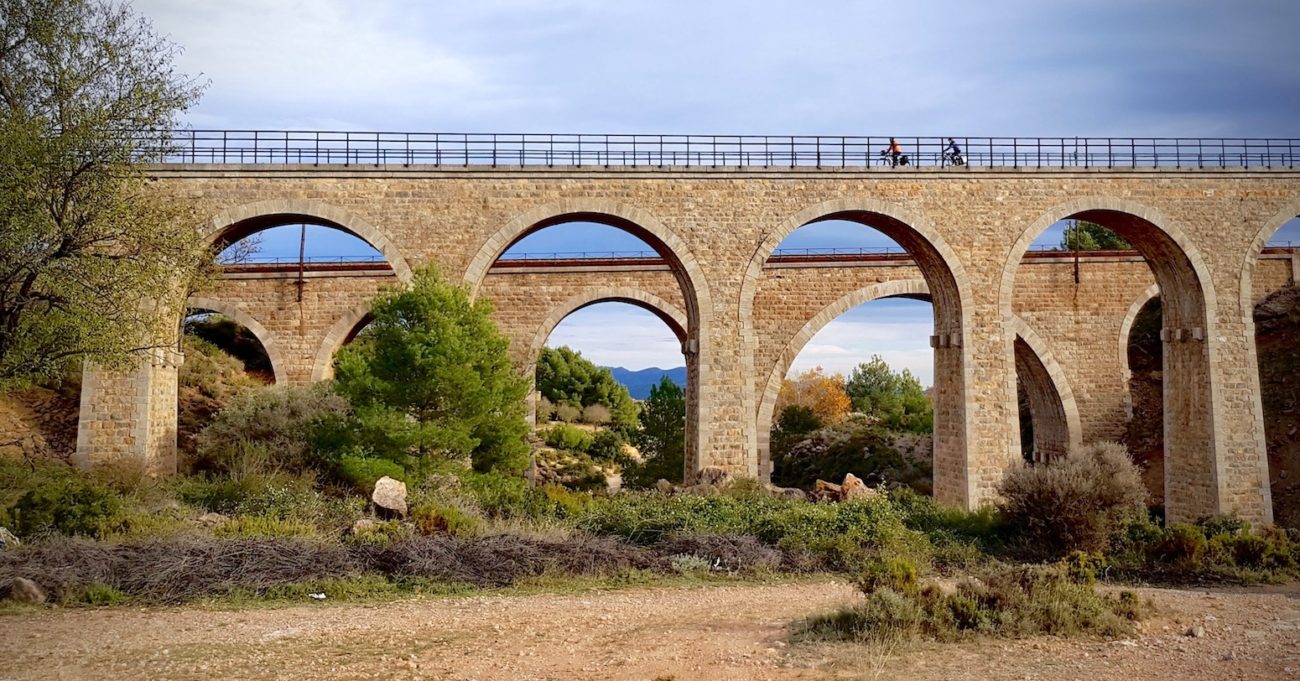 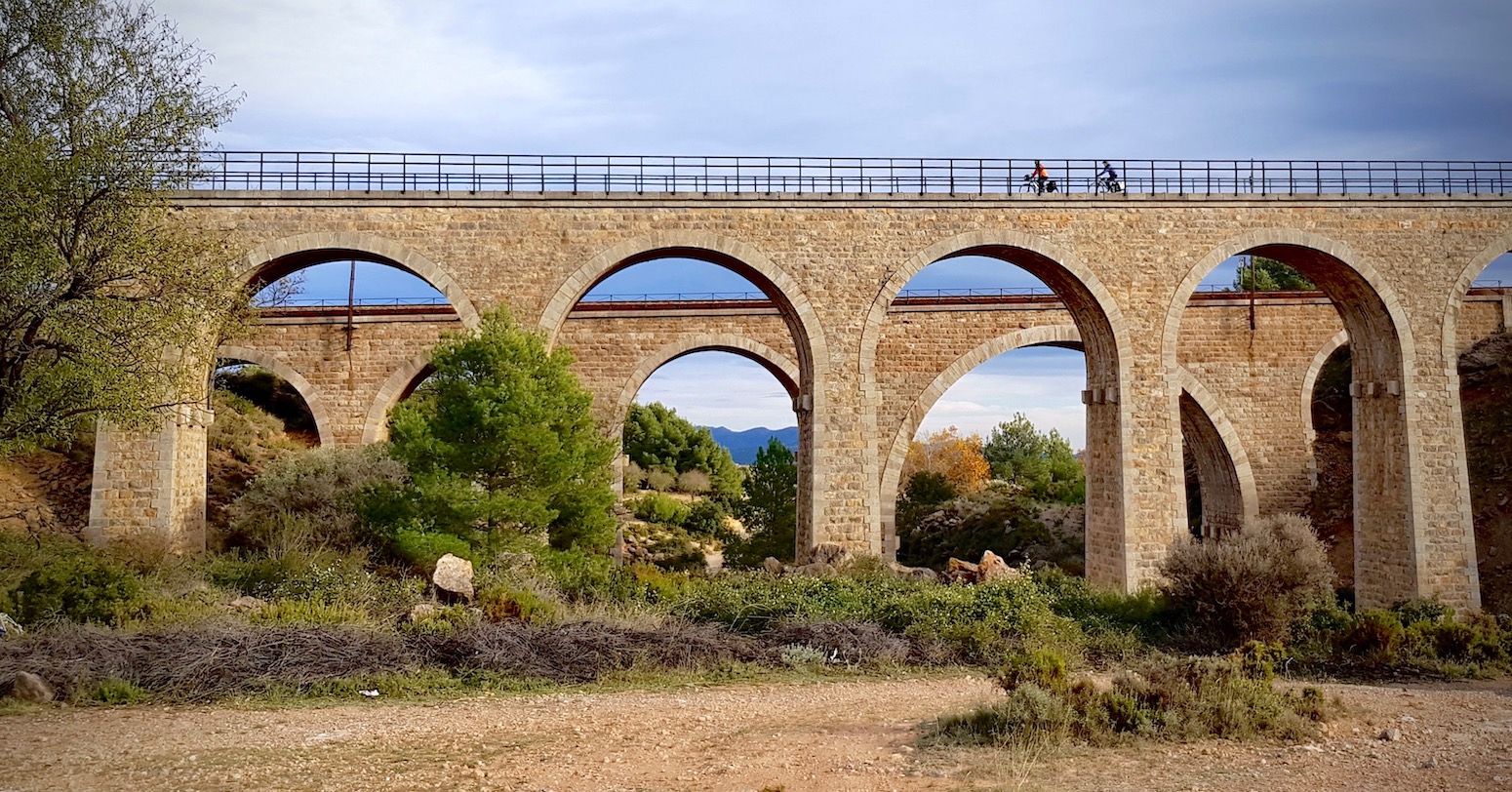 Spain’s vias verdes are cycling and hiking trails that have been developed along abandoned rail lines.  The longest of them all is Via Verde Ojos Negros.  If you ride the entire length plus the additional 29 km back to Valencia, you’ll log about 209 km.  It makes for a nice weekend or long weekend getaway from Valencia.

Young and enthusiastic riders might make the journey in two long days.  We took three seasonally shortened November days for our abbreviated ride.  First, we cut out the section beyond Teruel and second, we grabbed the train back to Valencia from Segunto.  That limited our ride to a comfortable 145 km.

A Long Time in the Making

For a three-day trip, our Ojos Negros ride took a heap of planning and scheduling.  We first learned of the route when we picked up a booklet at a regional outdoor recreation fair.  That was back when we had just enough Spanish to say, “Hello, I don’t speak Spanish.”

Approaching Jérica on the second day.

Let a year pass.  We’d spent a few days in Teruel with the pets during Las Fallas; Susan rediscovered the booklet and at about the same time Jamie found the Cicloturismo Valencia website.   And we had the language skills and resources we needed to organize the ride.

So we joined forces with our friends Mat and Kathryn and chose Easter weekend 2019.  Then the logistic nightmare started.  That holiday weekend every accommodation option along the Ojos Negros route was either booked or required a three-day stay.  So we scaled back and decided to take two days to ride from Caudiel to Valencia.  As the pasqua weekend approached, predictions of high winds and plenty of rainfall dampened our enthusiasm but we ignored common sense and set out.  Cold and drenched we bailed out at Puçol.

Undaunted (well, slightly daunted), we rescheduled our trip for the weekend of November 8th.  The weather leading up to the weekend was glorious.  We were going to ride during the peak of fall color.

And the Weather Gods Laughed (Again)

After weeks of idyllic, warm, sunny weather, a cold snap was about to hit the region.  When we got off the train in Segorbe I was already missing my puffy winter jacket in the face of winds gusting to 65 kph.  Then in Teruel where the air temperature was down near freezing everyone added clothing layers.  I ended up putting on every shirt I’d packed.

Enough about the weather, I can hear you thinking, "what about the ride"? 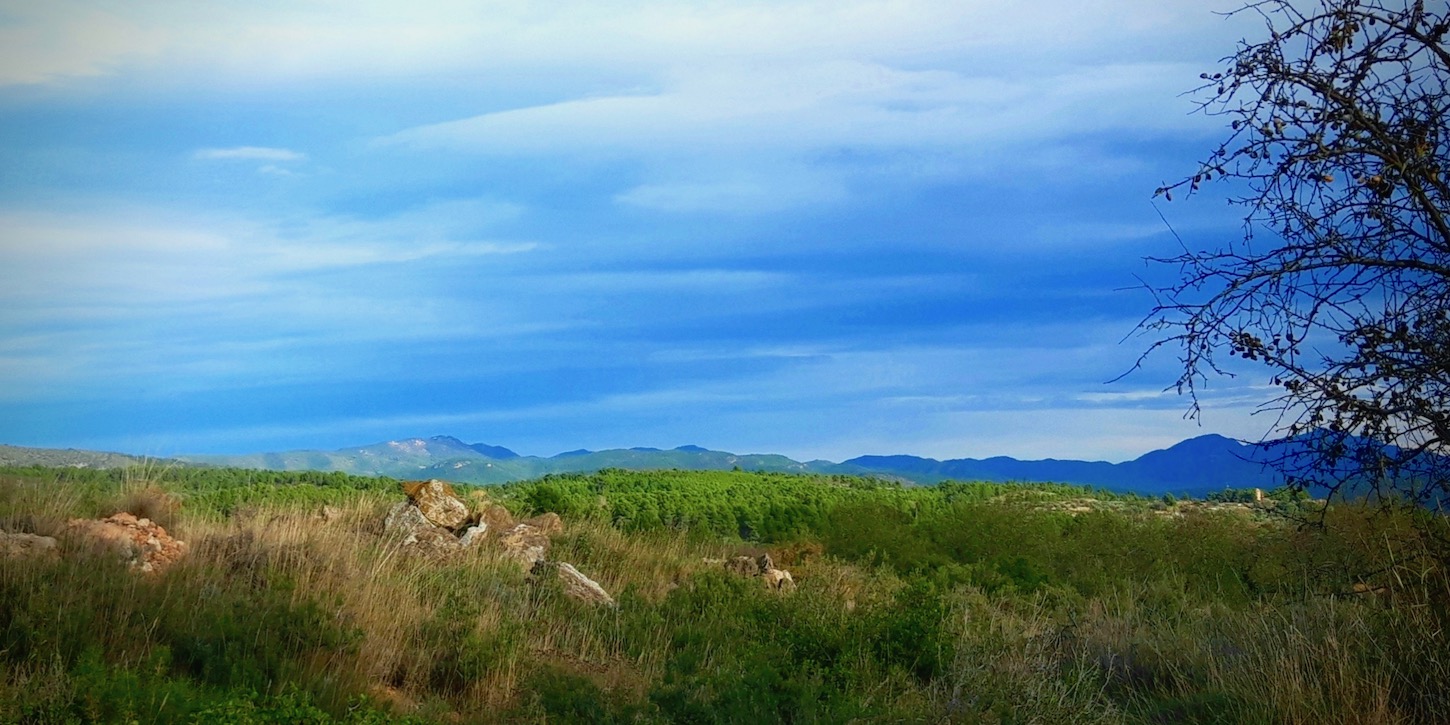 Out of the city and riding through open country.  Yahoo!

By the time we reached our jumping off place just outside Teruel it was already nearly noon.  We didn’t have far to go, but we did have a steady climb.  Not steep, but steady.  The ride tops out at about 1220 or 1230 meters elevation along this section. 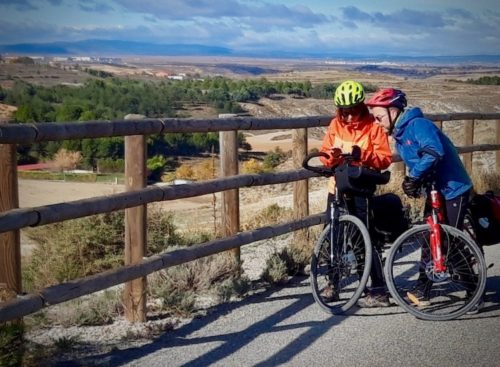 I remember the riding surface as being pretty rough, gravel and packed earth, lots of dried up mudslides and plenty of fallen rock.  I didn’t have any trouble with my mountain bike, but Susan struggled at times with the narrower tires of her hybrid.

In fact, as the day wore on, we all started to worry about Susan.   She just couldn’t seem to manage the climb.  It was a real puzzle until we left the gravel trail and hit tarmac on our way into La Puebla de Valverde.  That's when Kat noticed Susan's back tire was nearly flat.  We all jumped off our bikes and pushed them the last couple hundred meters into town where we sheltered in a garage to change out Susan's inner tube.

La Puebla de Valverde is a pretty stone village and about 1 km from the trail.  If you want to spend the night in a hotel right next to the trail, Hotel La Fonda de la Estacion is a 19th century farmhouse with meal service in the restaurant.  We were a bit early for our reservation and stopped for a couple of rounds of hot drinks before heading into the village.

You can also opt to look in the village as we did to find a house with cooking facilities.  There's a small market in town so you don’t have to bring all your food supplies.  By the end of that windy cold first day we were all so hungry that we nearly stripped the market of their stock of high calorie snacks.

A variety of land uses along the trail made for interesting vistas.

This stage of the trail is just fantastic, especially  if you like almost constant downhill runs on a well maintained surface.  The agricultural landscape is varied and interesting.   Grazing lands and olive orchards are interspersed with new plantings of oak trees that have been seeded with truffle spores.  Our shuttle driver, José, told us all about this relatively recent agricultural shift and the signs were everywhere.  This will be an enormous production area for truffles in just a few more years. 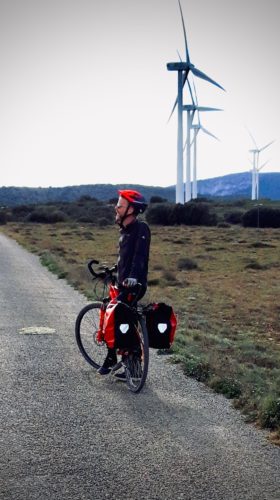 Riding through a wind farm was unexpectedly cool.

Also, the sun was out most of the day and the wind behaved itself (mostly). We took our first pit stop in Barracas to drink our tea and eat our cookies in the sunny doorway of the local church.  We also took our lunch break along the trail at one of the many waysides with picnic tables.

One interesting passage through this section was a detour from the old rail line through a windmill farm. We’ve never before been able to stand at the base of one of these enormous windmills and listen to the deep whoosh.   None of us realized how incredibly large they are until that day.

Riding downhill and fast through the many dynamited cuts the route passes through was interesting.  But none so much as the one where travelers before us began a rock stacking tradition.  It seemed to go on for a kilometer or more.  It was easy to imagine we had landed on another planet.  Especially since we saw few people on the trail during this November weekend.

The Ojos Negros route doesn't pass through many villages, so we were tempted to check out Caudiel when we rode through town.  But is was late and were looking forward to our destination.  What a good call.

We needed to leave the trail and navigate to Sháriqua, a lovely B&B up in the hills overlooking Jérica.  And it was worth it. The owners were hard at work harvesting  olives in their grove  below the house when we arrived.   But Anna saw us coming and met us at the door.   Later she prepared a delicious and hearty dinner for us (extra fee and must be ordered ahead of time). Next morning,  the luxurious breakfast spread was included.

View of Jérica from our B&B room.

The view from Sháriqua in daylight was astonishing.  Then when night fell and the village was lit up Susan thought we'd found the best place ever.  She was up half the night just star gazing.  The village  was mostly dark by midnight.  You don’t realize how much you miss stars until you get out of the city.

Even if you aren’t riding the Ojos Negros, Sháriqua is a destination B&B you're almost certain to enjoy.  You can take the Cercanias C5  train from Valencia to the Jérica-Vivers train station and take a taxi to the house or pack light and walk uphill about 15 minutes to the B&B.  I'm pretty sure we'll be returning. 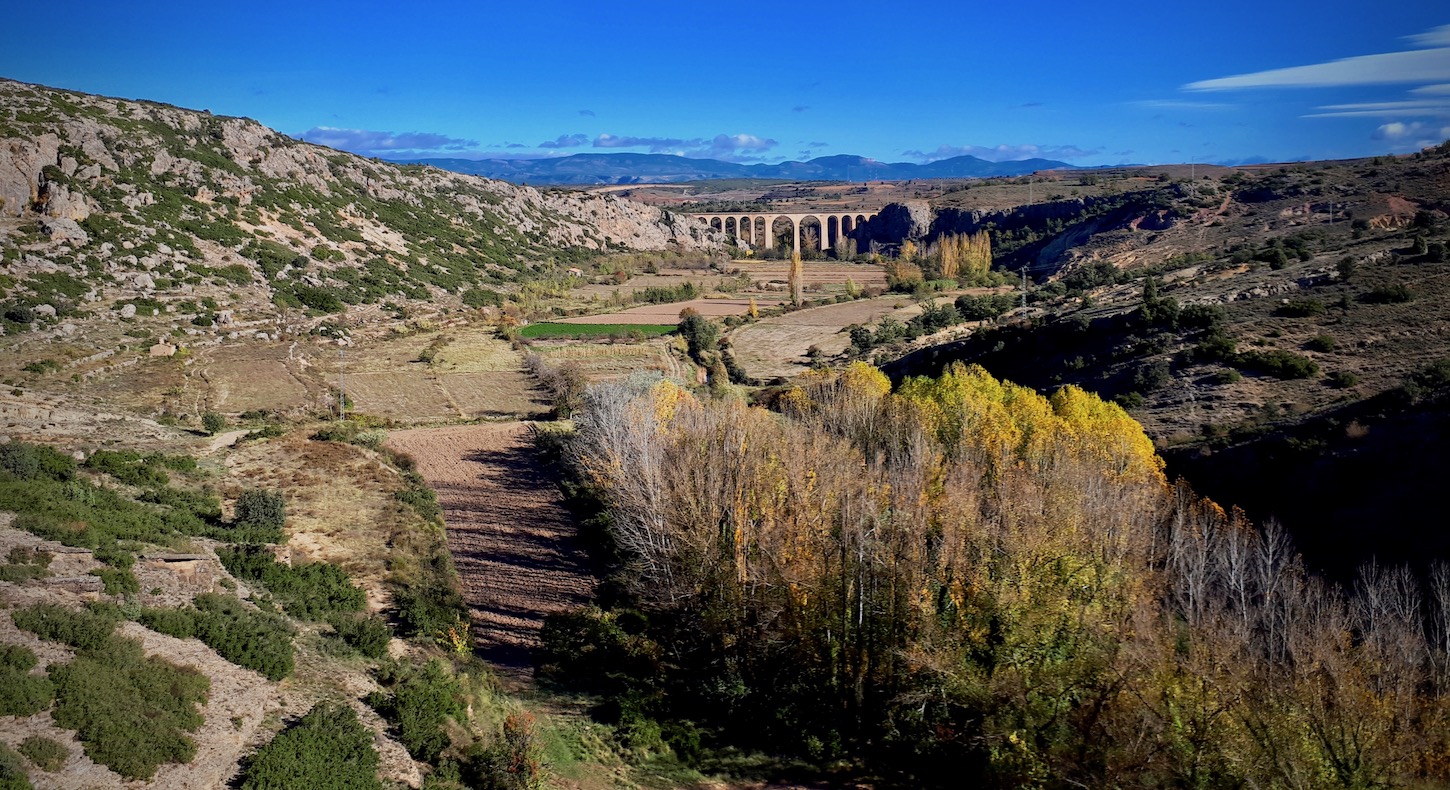 The route doesn't pass through many villages.

The route leaving Jérica  turned out as delightful as the previous day.  As the day wore on our enjoyment gradually eroded.  We found navigation to be a bit more difficult.  We actually had to pay attention as the trail left the abandoned right of way and meandered through neighborhoods along either side of the motorway.  As we were forewarned, below Torres Torres we found the Ojos Negros was less fun.

At the outskirts of Gilet we made a beeline by road into Sagunto where we bought train tickets for the balance of our return journey to Valencia.

Mat and Kathryn chose to finish the journey by bike.  And they trailed us into town by only 45 minutes.  They even stopped for a bite to eat.  You can tell who the slow pokes were. 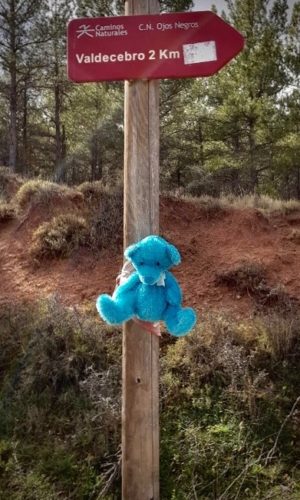 There are many tunnels (fun) and bridges (beautiful). Too many to count. Make sure your bike light is strong and charged.

A lot of the route is fairly remote and the riding surface is rough in many areas.