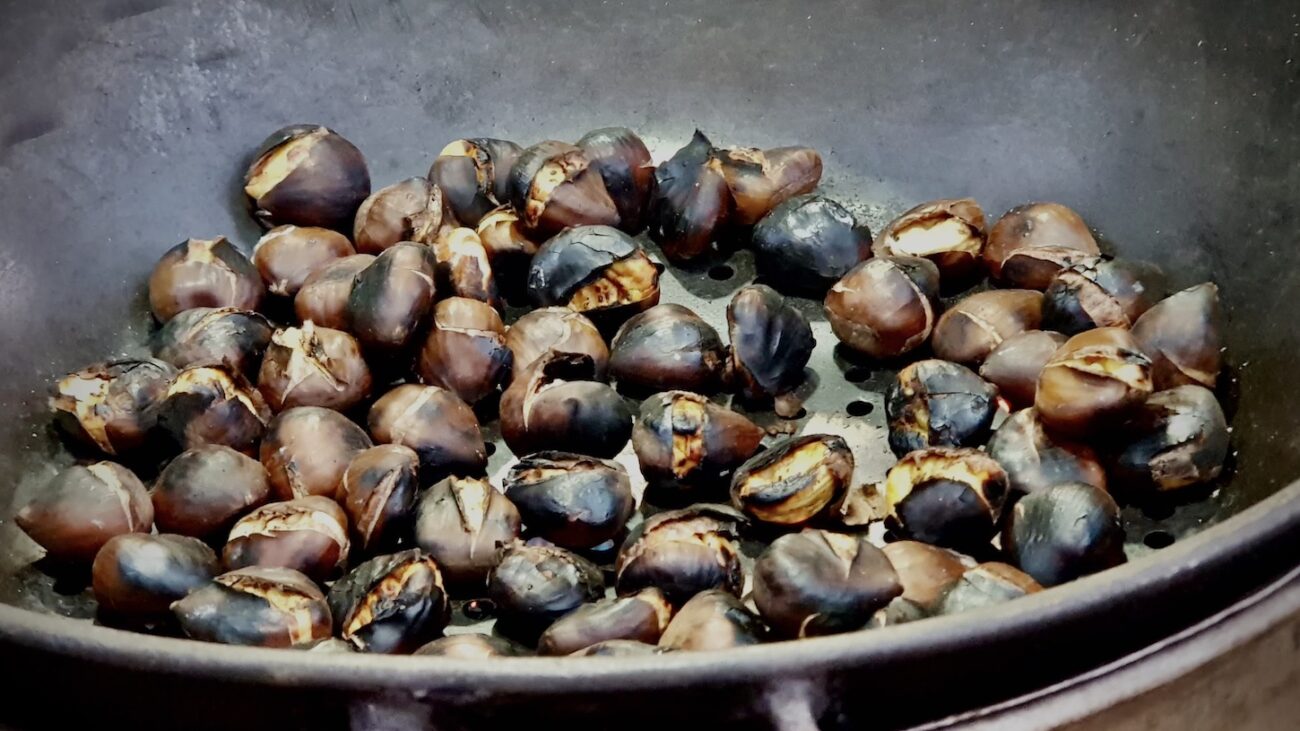 We’re all familiar with the December classic that begins, “Chestnuts roasting on an open fire…”  Funny thing, I didn’t know the song is titled “The Christmas Song,” neither did I realize that roasting chestnuts was a real thing.  I’d never eaten one and certainly never seen one roasted.  Until recently, that is.
The American chestnut (Castanea dentata) was common in the eastern forests of North America until the chestnut blight fungus was unintentionally introduced from Asia around 1904. By the 1950s, the American chestnut was considered “functionally extinct.”

Our first December in Spain there were vendors on every street corner actually roasting chestnuts over — wait for it — an open fire.   I was in heaven.  No silver bells though.

I bought a paper cone of nuts to sample my first fire roasted chestnut. I pried the shell open, burning my fingertips in the process, but it was all worth it when I savored the soft sweetness of the nut.

The cone didn’t hold that many nuts but I saved a few for my next day’s breakfast.  That was my first mistake.

Come morning, I struggled to remove the leathery shell from the stone cold nuts.  Then there was the thin skin under the shell.  I can’t get that off either. Imagine trying to remove an almond skin without the blanching step.

Instead of wasting those few nuts, I ate them skin and all. I realized my second mistake when I discovered why people say they don’t like chestnuts.  The skin is bitter.  Under no circumstances do you want it in your mouth.

If you don’t peel the chestnut when it’s warm you’re not going to peel it.  Period. 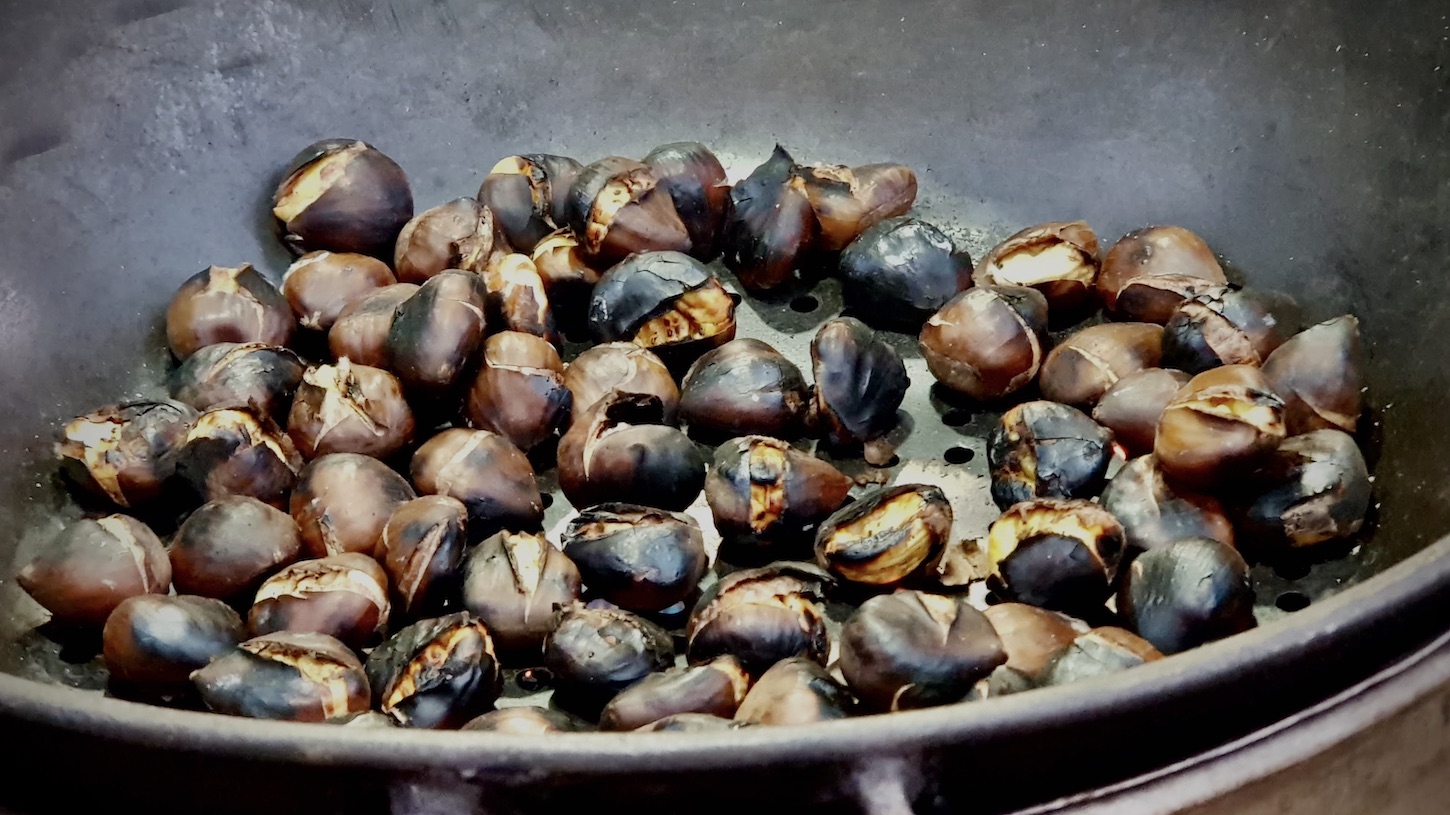 chestnuts from a street vendor.

Once that street vendor hooked me on chestnuts I bought them at the local market and roasted them at home to enjoy…while they were warm.

Fast forward to our stay here in Mairena, Spain where we find ourselves in chestnut growing country.  European chestnuts (Castanea sativa) were introduced to western Europe by the Greeks and cultivated in the Alpujarra by the Romans.  Some of today’s trees are 400 years old.

The local chestnut crop is important enough to warrant its own fiesta, which is generally observed on All Saints Day, the first of November.  Alas, this year there was no fiesta in Mairena or any of the surrounding villages as a result of — of course  — the Covid-19 pandemic.

That didn’t stop us from harvesting, preparing, and feasting on chestnuts for a good four weeks.

Not for a Tenderfoot

There are a number of bountiful chestnut trees on the finca (farm) owned by Emma and David, our hosts at Las Chimeneas.  We had a short lesson on harvesting the chestnuts and were encouraged to take all we could eat. 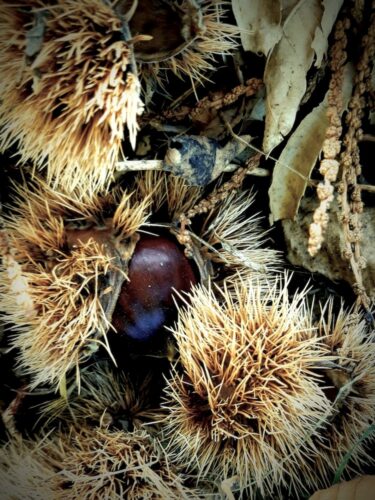 Nice to look at but a bit prickly. Like some people we know.

Harvesting is not difficult. No tree climbing involved.  The husk falls from the tree partially opened to expose one or two fully developed nuts in a beautiful shell that looks like polished wood.

The chestnut husk is another story.  It looks like a cross between a hedgehog and a sea urchin, with the defensive potential of one of those WWII undersea mines.

This elegant design will keep all enemies out until the nut is ready to germinate.  I tried to break one apart with my hands and quickly learned my lesson.  If the opening is not large enough to easily pluck out the nuts, you have to roll the husk around under your foot until you break it down.  You need the right shoes and a lot of pressure.

Getting to the heart of the matter

I prepared hundreds of chestnuts but I’m still no expert.

We prepared batches both ways with the single mission of getting the skins to come off in one piece.  In a batch of 24 nuts, maybe two nuts would come out of their shell intact.  So, if you try to make chestnuts this year for your holiday feast and you have peeling problems, just know you’re not alone.

My two favorite recipes came from Piatto on YouTube.  The first is a video on roasting.  While I still struggled with peeling the chestnuts I found their video on the boiling method.

You may want to watch the videos before you go shopping to make sure you select healthy, fresh nuts. 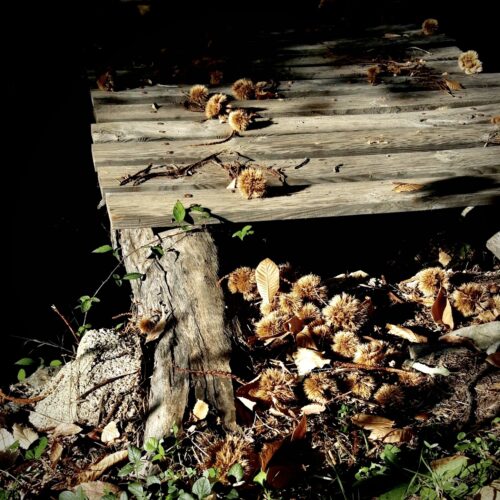 I had no guilt about eating six chestnuts a day for several weeks.  There are only 9 calories in each chestnut and I think I burned more calories just getting them to the table.  While there’s less protein and more fat than in other nuts, they are high in antioxidants. So, yes, they are healthy. You can look up other health benefits of chestnuts here.

I froze a fair quantity of chestnut pieces for future recipes.  As of now I’ve only made a Thanksgiving Chestnut stuffing.  The flavor wasn’t as strong as I imagined but I think that if I used larger pieces (maybe halves or quarters) the chestnuts would have been more obvious in the stuffing.  That’s why I’ve got to perfect that peeling process!

If any of you are chestnut experts, please provide your tips or links in the comments. 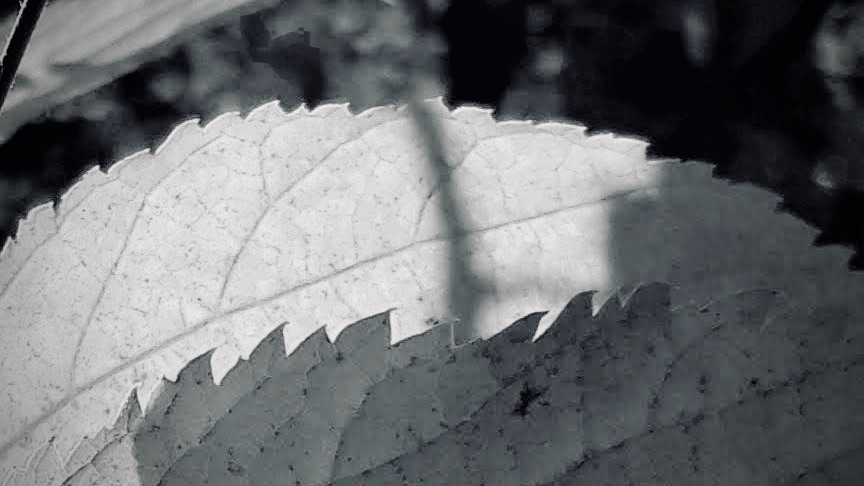