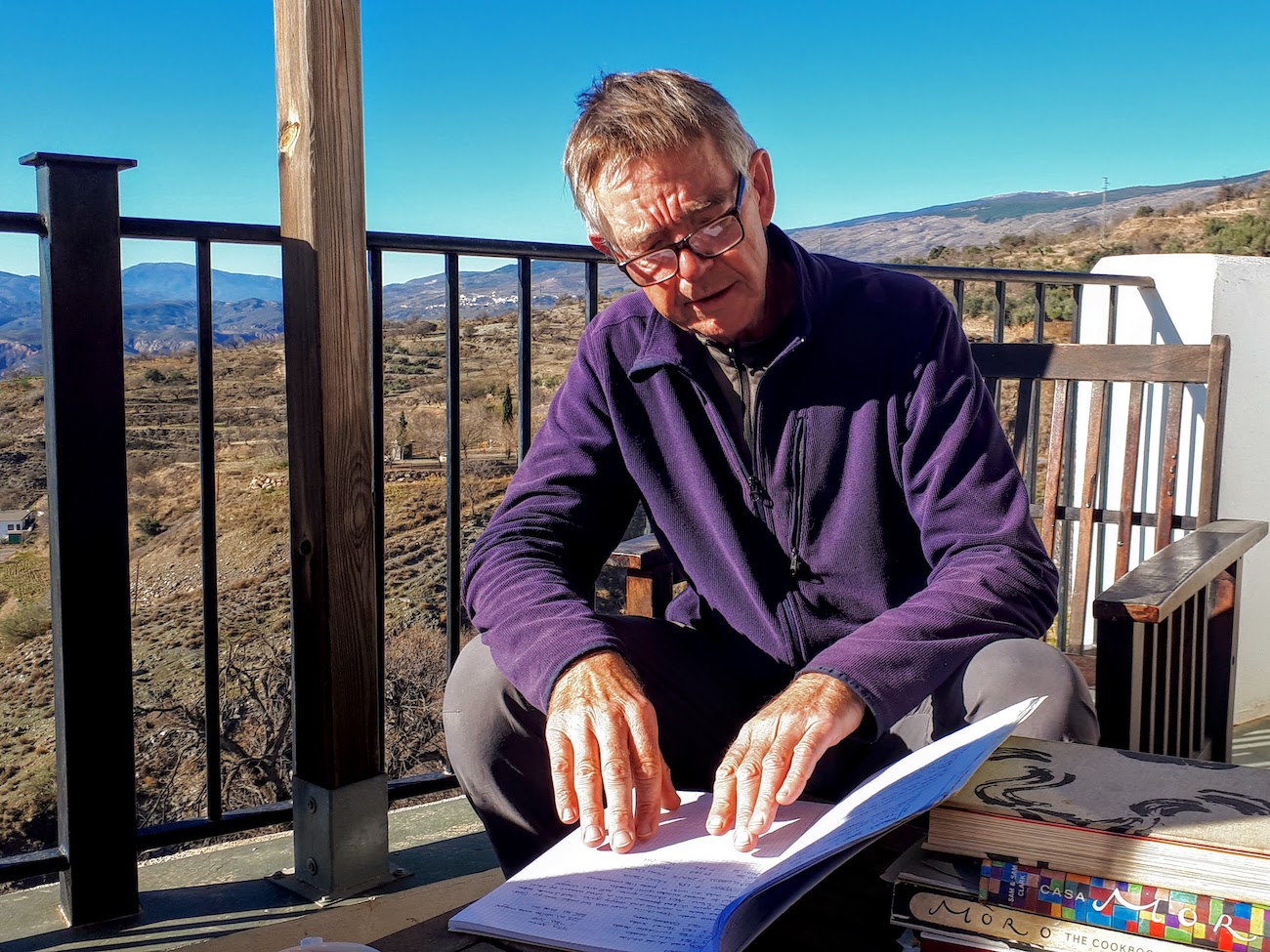 “Just put yourself out there, opportunities will happen.”

The restaurant at Las Chimeneas looks out across the valley to the Sierra La Contraviesa.  The view is captivating.  Now direct your vision downward a bit to a tidy garden replete with chili peppers, herbs, salad greens and a couple of young lemon saplings.  If the time is right and the irrigation water is flowing, the lanky figure weeding the lettuce or turning the compost heap will be Alistair.

Susan and I first encountered Alistair in the garden.  The weather back then was still fine; the herbs and greens were still producing, and he was in the midst of harvesting and drying a bumper crop of chillies.  He offered us access to the unused garden surplus.  The hotel restaurant was (and is) closed for want of guests and frosty weather would soon claim what we couldn’t use.

In the following days he and I would chat a bit when I stopped by to collect salad greens.  We’d talked about gardens and gardening and bit by bit got to know one another.  Slowly our conversations turned to snippets of personal values and when he mentioned one guiding principle, “You don’t need much,'  I wondered how he came to be in Mairena.

He’s been part of the Las Chimeneas community since he decided he wouldn’t go back to England after a holiday at the hotel.  He asked David and Emma if there was something he could do to help out.  At the time they were experimenting with the WWOOF program where folks exchange work on organic farms for room and board. 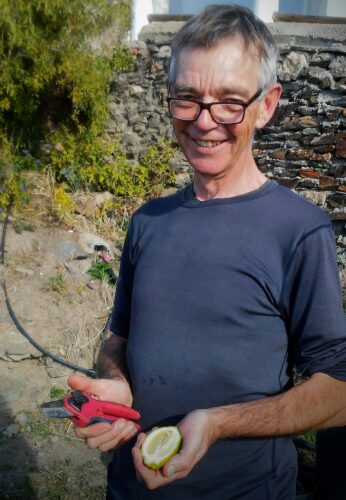 “David had me painting and doing maintenance,’ he told us.  That is until Alistair mentioned he might be able to help out in the kitchen.  During special events like yoga retreats or the bread making course hosted at the hotel, the restaurant staff are hard pressed to keep up with the demanding schedule.  It didn’t take long for Emma to notice Alistair’s mastery of the chef knife and his capacity to keep the kitchen organized.

It turns out Alistair had been a chef on the Cunard Line’s Queen Elizabeth II, and at the Ritz Hotel in London.  It’s been five years now.  Alistair is still working in exchange for room and board and really wouldn’t have it any other way.

And Why the Garden?

The restaurant garden is a relatively new project for Alistair.  His mum was his motivation.  When he lived with her that year after selling the bakery he owned and operated for more the 20 years, she taught him a lot about gardening.  In WWII she was part of the Land Army in England.  She worked in the apple orchards. She’s always had a connection to growing food.

He’s still experimenting and innovating with compost regimes and pest control.  Consequently when he learned Susan was a master gardener back in Oregon and that I have mastered pruning techniques, we added another link.  But the strongest commonality we share is that we all realize that when we grow the garden the garden grows us. Gardening is one of the best ways to calm one’s mind.

I should mention that Alistair bakes several loaves of bread each week, even though the restaurant kitchen is closed.  We arranged to purchase a couple of those loaves each week.  And thank goodness.  His whole grain, sourdough loaves eclipse the offerings of the bread vendor.

One day I took him up on his offer to teach me his no-knead method.  And then, grasping the mile when he offered an inch, Susan and I asked for a Moroccan cuisine cooking lesson.

It’s clear that Alistair is in his element when he’s in the kitchen.  Just to witness his efficiency is a joy.  He told us of his experience on the QE2.  He was charged with managing the Princess Room, where the first class passages dined.  There was no fixed menu for this group. They could order anything they wanted.  Everyday.  The passengers ordered in advance, but it could be anything.  It was really hard work to plate about 120 unique dinners, especially considering his schedule.  Three months on duty seven days a week, followed by a month’s leave.

And Alistair is still learning about food.  Last December he went to learn about Moroccan cuisine at Moro, a famous London restaurant.  He’d met the owner, Sam, when Sam brought his staff and crew to Las Chimeneas for a holiday week.  Alistair took the opportunity to suggest he wanted to learn to cook in the Moroccan style.  Sam, of course, invited him to London, where Alistair exchanged his help in the Moro restaurant kitchen for experience.

When Susan asked him how he’s managed to have so many wonderful experiences, Alistair replied, “Just put yourself out there, opportunities will happen.”

I admire Alistair, at age 62 he’s found his way to a fulfilling, gentle life.  He doesn’t look forward with anticipation or backwards with regret.  He’s so humble and so averse to giving advice.  But, after listening to him, I think his idea of living in the present is the most important thing people should know about him.  He really walks the walk. 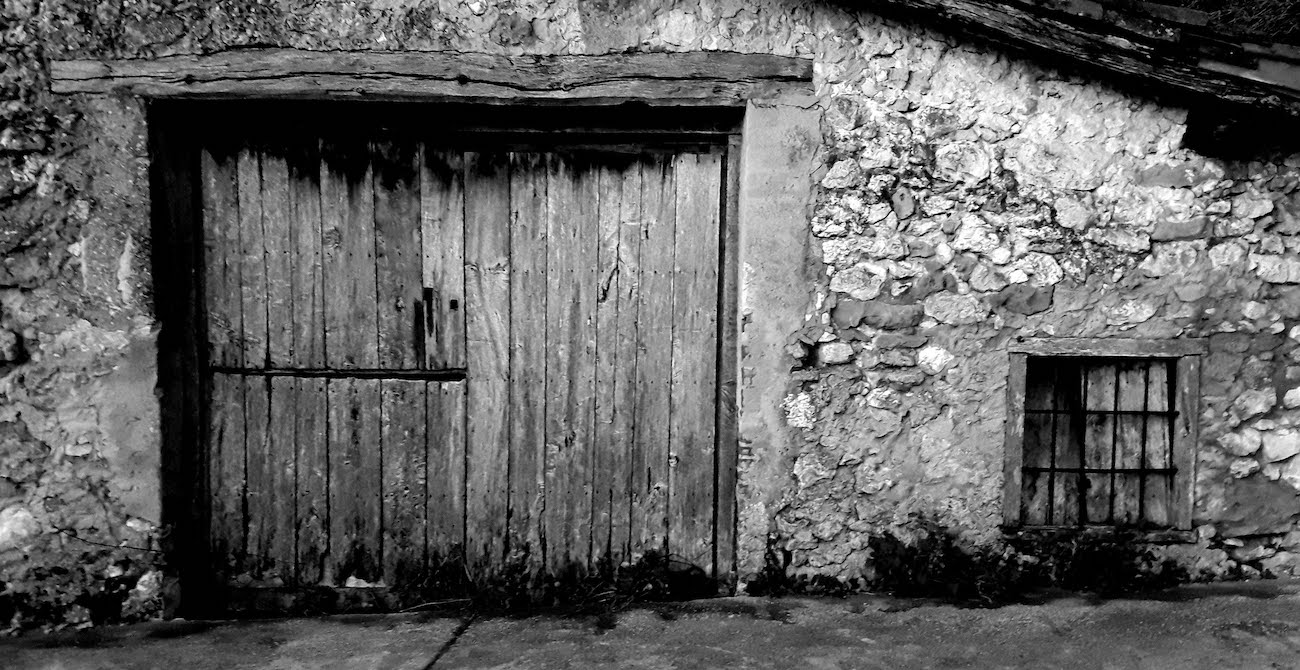