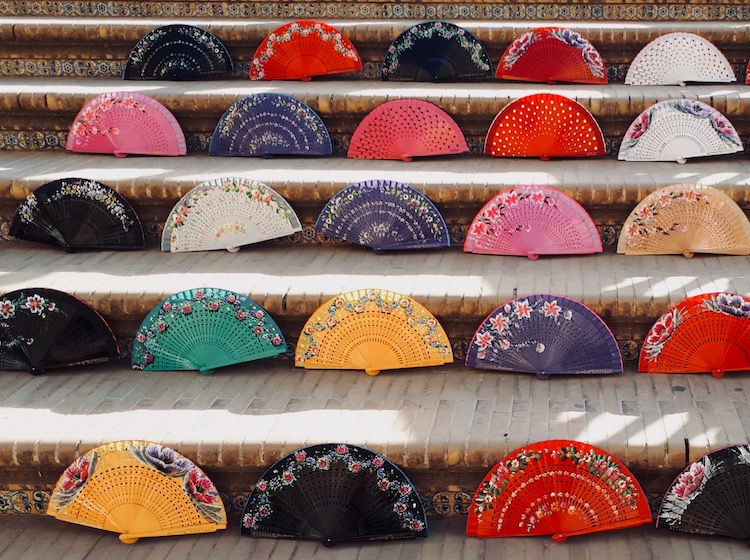 Our sweep through Andalusia was not the typical slow travel we prefer.  Jamie’s sisters, our travel companions, had a tight calendar and we had only five days to experience five destinations.  One would think the July heat of Andalusia would have slowed us down, but fortunately, we had cool sweater weather most of the time.  We took plenty of rest stops and stayed on the go from morning till night.

Each member of our party did their own research and developed their own list of top sights to visit, but I think serendipity, the happy surprises, are the best part of a trip.  So this won’t be a list of the main attractions in each city -- those are available everywhere.  This is my list of our special and unexpected experiences.

Our Airbnb was right next to the Alameda de Hércules.  This garden square/mall is an amazing place for strolling and dining with the locals and not the tourists.  We found this destination on our last night and could kick ourselves for not finding it sooner.  There are restaurants available for every meal and it’s the kind of place you go just to watch life.  All thumbs up on this one.

On our way to the Plaza de España, we walked through the Jardines de El Prado de San Sebastián.  This green zone in the center of Seville drew us in with a gorgeous bar/café.  We ordered a second round of drinks and changed seats just to enjoy a new view and still it was a tough place to leave. We had just walked around the Real Alcázar and through the Jardines de Murillo so there was plenty of natural beauty to enjoy but this destination was a lovely surprise. 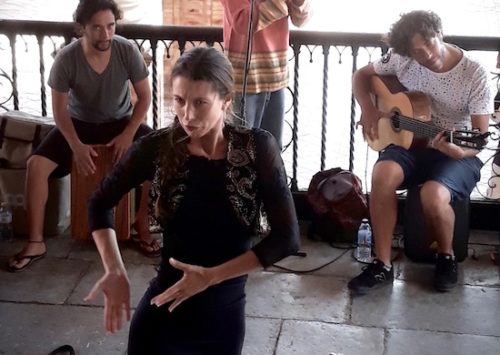 Every Spanish city has its plaza’s and I thought Plaza de España would be just one more.  A considerable walking distance from our end of town, it might have been skipped if the weather had been miserably hot.  That would have been a shame.  Not only is this plaza unique in that it was built for a specific purpose (the Ibero-American Exposition) connected to the World’s Fair of 1929-1930 in Barcelona. This plaza was so much more than I expected in grandeur, activity, beauty, and everything Andalusian.  We enjoyed a Flamenco performance, watched boaters experience the plaza by canal, and oogled and purchased the handpainted fans displayed on the stairs.

The colorful neighborhood of Triana across the Rio Guadalquivir was once its own pueblo but is now a part of Seville.  We crossed at the Puente de Isabel II, however, the southern Puente San Telmo is equally pleasing. The Mercado de Triana is a new market built in the original position but once you are inside you feel you are in old Triana with the city’s ceramic heritage on display.  We enjoyed an afternoon pastry and coffee while watching residents take in the World Cup game between Spain and Russia. We moved on with just enough time to get into the Castillo de San Jorge before it closed for the night.  The Mercado is built on the remains of this castle, known for its role in the Spanish Inquisition.  These ugly historic times are tastefully documented in exhibits.

While in Seville we picked up a map of the Pueblos Blancos at the Tourist Information Center (TI).   That map and Rick Steves helped us choose which of the White Towns of Andalusia would be on our trip. 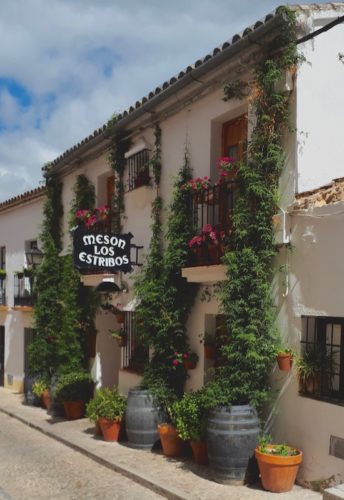 We made a full day out of touring two tiny pueblos blancos before arriving in Ronda for the night.  Our first was Zahara de Sierra  and the second was Grazalema.   I did no advance research so everything about the white towns was a surprise.

Zahara is tiny but packs a wallop with outdoor recreation resulting from both its situation within the Parque Natural de la Sierra de Grazalema and a beautiful reservoir.  And while the Moorish castle ruins are just that – ruins – the lookout from the top cannot be beat.

Grazalema, a white village of about 2,500 residents, is also within the Parque.  This is a good place for a lunch break and a stroll.  And, if you are up for it, for 2 euros (less for children) there is a public swimming pool at the highest lookout (mirador).  Talk about surprises!

With a population of about 36,000 Ronda  is more of a small town.  When you first arrive through the industrial side, you wonder how it gets classified as a white village.  Then you see it – the new and old bridges (Puente Nuevo, & Puente Viejo), the Parador Hotel, the old Jewish quarter, and the Alameda del Tajo (a gorgeous park with scenic vistas).  There’s a lot happening here making it a great place to spend the night. W e liked it so much we were in no hurry to leave the next morning and enjoyed more hiking along the gorge.

We were in Granda primarily to see the Alhambra, but we did uncover a few other gems to pass on. 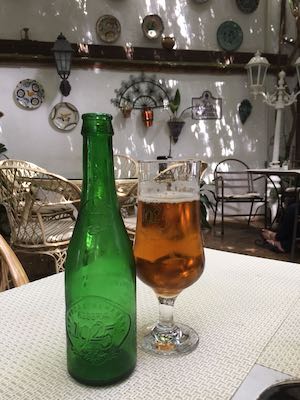 Stopping for Drinks on the plazas and patios

The real eating spots are in the Realejo neighborhood.  We didn’t spend enough time eating here, finding it only on our last night, but this is the place for a tapas, dinner, or drinks.  This neighborhood simply sparkled at night.

I saw people disappointed that they couldn’t pick up a ticket to the Alhambra on the day of their arrival.  Still, I was surprised at the number of areas you can visit without a ticket. You can walk right into the Museo de la Alhambra, the Museo de Bellas Artes, and the Palace of Carlos V through the Puerta de la Justicia.  The C3 mini bus or your taxi driver can take you right to the entry.  It is possible to walk around the outside of the walls and in the gardens surrounding the palaces. There isn’t a lot of green in Granada, so it is important to take advantage of the green around the Alhambra.  Additionally, two hotels sit right on the grounds of the Alhambra - The Parador de Granada and the Hotel America Granada.  Both are lovely places for a meal or drinks to soak in the flavor of the space.  We enjoyed the America terrace for lunch and the Parador for drinks to cap off our day at the Alhambra.

Both Seville and Granada string shade cloth high above their primary thoroughfares and individual restaurants installed automatic misters on the canopy of their outdoor seating. This is something I’ve not seen in Valencia (yet) even though we returned on a 40 degree day with more hot days in the forecast.  I do hope it’s a trend that will head north soon.

The three women in our party established an admiration society for Spanish shoes and we particularly adored the shopping district of Seville. 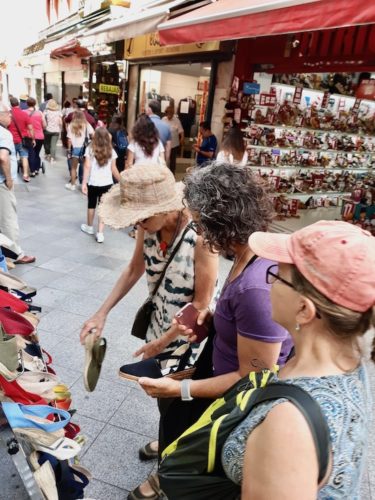 What a Surprise! We're Shopping for Spanish Shoes in Seville

Jamie and I were delighted to enjoy a local vegan tapas dish (espinacas y garbanzos) and gazpacho at every meal – served in cups, bowls, and even in glasses with ice cubes.

I find the Spanish people to be so friendly and helpful to non-Spanish speakers in both the tourist regions as well as off the beaten path.  It was especially fun to see our visitors captivated by their charms.  Such kindness will live on in everyone’s memory.

This is our version of a tapas served to us in Granada, minus the sardines.

Chill before serving on toasted baguettes.