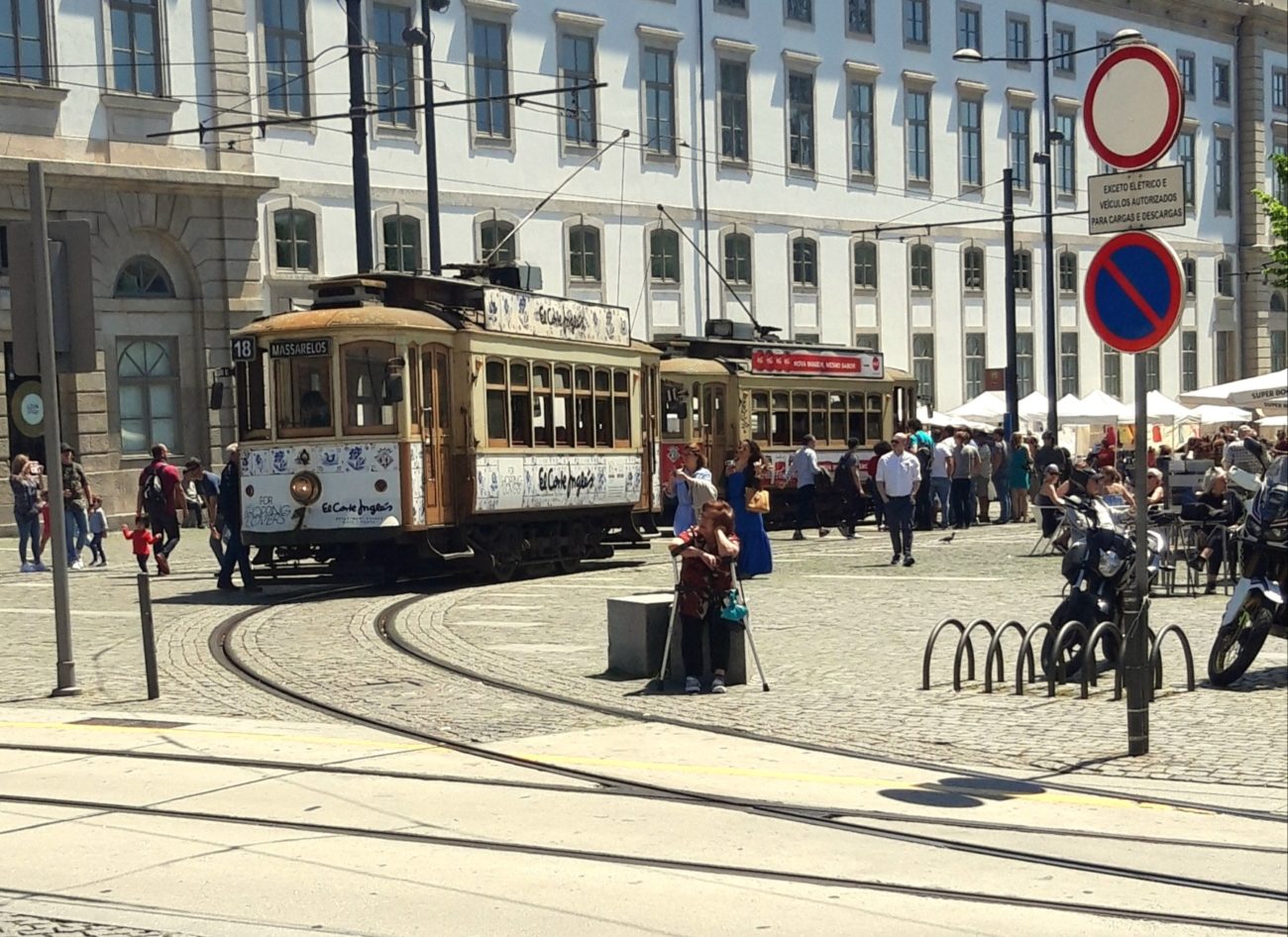 We went to Portugal to experience the Douro Valley  and to learn about the process of creating the fine Port wines of the region.  So, despite our usual attempt to avoid over-visited cities, we needed to finish our exploration in Porto just like the wine.  Besides, that’s where they keep the nearest international airport.

Actually, we needed to end up in Vila Nova de Gaia, the city immediately across the Douro River where all the Port wine is actually finished.  That’s right Virginia, despite the name, port wine is not actually made in Porto.

The name Vila Nova de Gaia implies that it is the new city on the block. In fact, the community was established by the Romans in the 1st Century.  They called the city Cale.  At that time Porto was small potatoes and Cale was the population center.

Later, when the Moors invaded Portugal in the 8th century,  Cale was abandoned and people took refuge on top of the bluffs on the north side of the river in what is today’s Porto.  Then in the 10th century when the Moors were expelled, the residents resettled the south river bank, and that’s how Vila Nova de Gaia became the “new” city in the region.  Only 1,100 years ago!

The sights connected to Port Wine

No fewer than 20 major port wine producers are located in Vila Nova de Gaia and probably many more. The port wine cellars or “caves” are a big, if not the biggest tourist attraction in the Porto region.

You can reach the world of port wine by taking a water taxi or enjoying a short amble from old town Porto across the Dom Luís I bridge.  The architect, Teophile Seyrig, was a student of Gustav Eiffel and so the bridge resembles the famous Eiffel Tower.

There are so many wine producers in Vila Nova de Gaia that it is difficult to know which one to visit.  We had friends who visited Grahams (the most impressive terrace and views) and Taylor’s (one of the oldest since 1692). Our hotel clerk recommended Cockburn’s, the largest and the only lodge allowing a close-up look of their working cooperage during the tour.

We took her advice, reviewed their website and scheduled a tasting and tour in English for the following afternoon.  It turns out that Graham’s and Cockburn’s along with Dow’s and Warre’s are owned by the Symington Family Estates bringing the same quality and class to each brand.  Tour and tastings start at 15€ per person at any of these lodges and are by reservation through their websites.

Many of the big Port Lodges have their own restaurants where you can enjoy a fancy lunch or dinner.  We opted for the picnic lunch from Cockburn’s that was so large we not only enjoyed it for lunch, we ate the remains for breakfast the next day, had a snack on the airplane, and we even brought home some olive pate.  They offer a standard picnic, a deluxe picnic, a children’s version and a vegan or vegetarian version.  All adult picnics include 2 glasses of wine – a dinner wine of your choice and a port.

After a 40 minute walk on a really warm spring day we arrived at the reception desk parched and were immediately offered a glass of water.  We toured their museum, enjoyed lunch, and began the tour with Joana, our guide, and another pair of visitors from France.  It was a small and special tour with a guide quite passionate and knowledgeable about her work.

Cockburn’s holds about 9 million liters of port for aging in 6,000 barrels. That’s 1,500 liters per barrel! It’s mind boggling.  It’s legal for Port producers to barrel age their wine for only two years and then further age the wine in the bottle but at Cockburn’s the wine stays in barrels for 5 years before they even begin the blending.  The length of the aging process means that all of these port lodges are really big, but Cockburn’s is the largest.

What else we enjoyed in Porto

We like to get to know a city by testing how far our feet and legs will carry us. Porto has some steep hills so our walking distances may have taken a hit.  In fact, it is so steep in places, they have a funicular and a gondola, along with the usual buses, metro, and taxi. 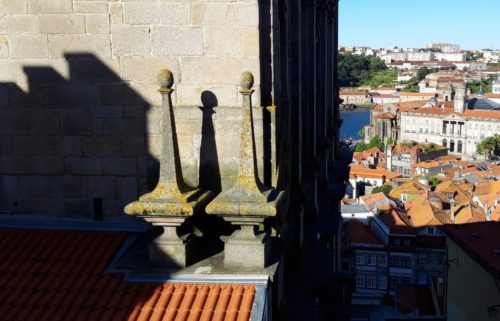 Porto from the cathedral plaza.

With beautiful weather we didn’t want to spend much time inside.  It turns out the São Bento train station was the only building we ventured inside to see.  The impressive 100 year old ceramic tile paintings of Portuguese history made me realize I know nothing about this country except for Magellan’s fame.  We passed on viewing the famous Lello Bookstore, we skipped the cathedral, and we intentionally missed visiting the innumerable churches, convents, museums, and all the government buildings.  Pretty much all the buildings will be there for another time.

We did walk through parks, along the waterfront, eat good food, see and talk to some pellegrinos (pilgrims) on the Portuguese Way of the Camino de Santiago. We took it slow enough to stop whenever we wanted for photos, to listen to street musicians, and sometimes just to watch the other tourists.

Porto and Vila Nova de Gaia are so intertwined that there are six bridges. Felipe, our Quinta host in the Douro Valley  and driver who transported us from the Douro Valley into town proudly announced that Porto was the "City of Six Bridges." That puzzled me. “He must mean the city to have only six bridges,” I thought.  “Certainly not the city with the most bridges.”  I mean we routinely cross 4 of Valencia’s 15 city center bridges.

Later, out of curiosity I asked our friend Google which European city has the most bridges.  It turns out that Hamburg Germany has 2,500 bridges, more than London, Amsterdam, and Venice put together.  Then I read that Porto/Vila Nova de Gaia share the distinction of being the only European cities connected by six bridges, and that explained it.

Getting to Porto from Valencia

Ryan Air offers the only non-stop flights from Valencia to Porto four to five days a week, depending on the season. It’s a short trip, just an hour and 40 minutes.

The Porto airport was upgraded with a new terminal building in 2006 and is quite lovely. But unlike most airports, it’s much easier to buy clothes or souvenirs than a cup of coffee. We tried in two café’s before finally finding a table and a civilized queue where we didn’t have to thrust our elbows out to hold our place in line.

The shortage of food services seems to be a problem. I remember similar behaviors in Minneapolis, Minnesota when a snow storm shutdown the airport. I sure hope Porto never experiences flight cancellations of that magnitude. It will be total mayhem.

And, in case you don’t manage to tour a Port Lodge, the prices for port wine in the duty free shops are the same prices we paid at the Lodge – no more, no less. If you didn’t buy a bottle because you have a carry-on, well, there’s your chance.

We know from experience that Port Wine is difficult to find in Valencia. We wanted some for Christmas dinner last year and searched the city to discover we had only three choices at El Corte Inglés. This Christmas we’ll be prepared…maybe. If it’s anything like buying Halloween candy in advance, we’ll probably have to make another Porto trip prior to La Navidad.