We kicked off our cycle tour of the Emilia-Romagna region from Bologna because, well, that’s where the plane landed.  But, before we grabbed our bicycles and hit the road we wanted to see a bit of what Bologna had on offer.  And a bit is all we really saw.  There are so many museums, historic monuments, and what-all that we could have spent weeks there.  But we only had a day and a half - much to my regret and Jamie’s delight.  I just can’t get that guy to enjoy what big cities have to offer.

Bologna is a big city 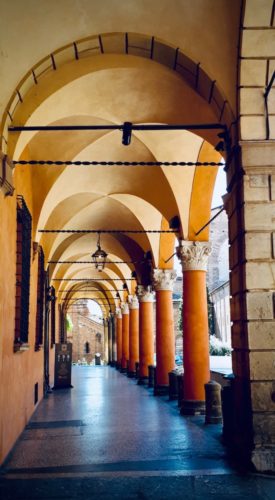 Relief from the intense summer sun.

And Bologna is a big city.  There are a million people in the metropolitan area, but the city seemed much bigger and busier than Valencia (which has 1.5 million).  Our hotel was in old town where there was a surprising frenetic energy.

Maybe everyone was downtown shopping for summer wardrobes the days we were there.  Or it might have been the students.  At 931 years, Bologna University is the oldest in Europe. About 100,000 students attend classes each year.  And they are the predominate presence in the city center.

Take that density of energetic young people hurrying to class (mornings) or bars (evenings), mix in tourists, a critical mass of cars and busses, motorcycles and bicycles, and set it all into motion with no apparent regard for any formal rules of the road that I could tell.  And somehow it worked in a rolling improvisational dance sort of way.  A person really had to keep her eyes open.

I guess I’ve grown too accustomed to Valencia these past two years where life unfolds a little more slowly.  Frankly, I was glad I wasn’t cycling in Bologna. And, read on…  I was grateful for the porticos.

We’ve been in Europe long enough to understand why someone came up with the ABC’s of touring Europe.  A – another. B – bloomin’. C – cathedral, church, castle.  I mean they’re everywhere, aren’t they? After centuries of accumulation, the supply is nearly endless.

Ah, but Bologna. Bologna has a characteristic architectural flair that’s beautiful and plentiful. More importantly, it’s useful and it’s called porticos. We were ducking in and out of them to escape the heat with great pleasure, so my first question to Claudia, our contact from Bologna Greeters, was, “Why so many porticos?”

Exploring with Claudia of Bologna Greeters

We adore the concept of volunteer guides graciously meeting with visitors to share their love of their city.  For Bologna’s greeters program, you contact the group through their website,  give them the dates you’ll be in town, answer a few questions and they'll do their best to match you with a volunteer greeter who will share the history and best parts of their city with you for 2 or 3 hours. 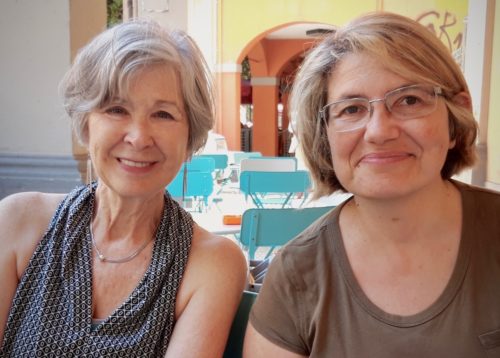 We were so pleased to share a morning with Claudia.

We hit the jackpot with Claudia on her first-time greeter assignment.  She spoke excellent English plus she’s a history professor and life-long resident of Bologna. After we took in some sights and learned a few of the secrets of Bologna, we sat for refreshments and talked and talked.  It was our chance to learn what life is like in Italy, where Claudia goes for her summer holiday (Naples), and how our interest level compared to her college students (better).

And about those famous porticos? Claudia explained that back in the day when someone wanted to expand a house, they simply built the floors above the ground floor out over the street. Originally, they used triangular support beams.  Later, I imagine after an errant wagoner had knocked over a beam or two, people switched to pillars and the portico was born.

In the 11th century the city government ruled against taking public space for porticos.  But then reversed course in the year 1288 and added codes specifying portico dimensions, support beam requirements, and not only allowing but requiring all new houses to include a portico on their private land.  That rule resulted in the citizens of Bologna essentially having covered passages tall enough to clear a traveler on horseback and broad enough to shelter an outdoor workshop or market space.

Today, there are nearly 40 kilometers of porticos in old town, more than any other European city.  And many of these porticos are over 1,000 years old because the government also mandated that pillars be made of brick or stone.   At more than two miles long, Portico di San Luca, just outside the city center, is the longest in the world.  It was built for a religious procession.

We enjoyed the food

When we returned from Italy, everyone asked, “How was the food?”  It was Italy.  What did they think?  The whole world loves Italian food.

We weren’t there to dine on Spaghetti Bolognese (known as Ragù in Bologna) because we don’t eat meat and I couldn’t even tell you how frequently it even shows up on menus because I wasn’t looking.  But, I have a sneaking suspicion it is a more popular dish in the USA than it is in Bologna, for Bologna is known for food "that cannot be described with words."

We had a recommendation from our hotel for a restaurant that had a fair number of vegetarian options on their menu.  The restaurant, Gessetto, la Cucina Italiana was so delightful we immediately made a reservation for our final night in Bologna at the end of our cycle loop.  Giorgio, our  waiter described their recipes in these words: "a fusion of northern and southern Italian cooking with a twist."  And vegetarians did not miss out with their special treatment.  The place is hopping.  If you go, make a reservation.

There’s a convenient and affordable Ryan Air direct flight from Valencia to Bologna and we arrived in just 1 hour 55 minutes. 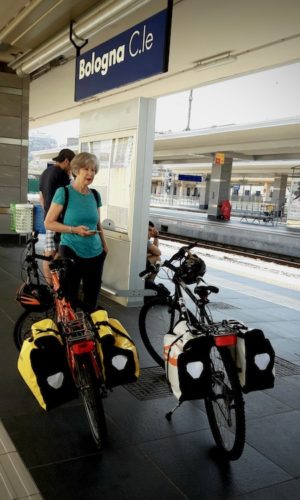 A shuttle bus connects the airport to the Bologna center and train station (Bologna Centrale) and runs every 11 minutes, daily.  Hours from the airport are 5:30 a.m. to 00:15 a.m.  Hours from the train station are 5:00 a.m. to 23:35 p.m.  The cost is 6€ each way. It’s about a 30 minute ride and can be quite uncomfortable because it gets packed fuller than an airport transfer bus that is just going from the plane to the terminal.  We were lucky(?) enough to have a place to sit with our legs draped over our luggage but we almost had a couple of passengers in our laps and we got the occasional elbow in the eye.  I hoped people might disembark at an earlier stop, but no, absolutely everyone went downtown to the train station.

We dreaded the return to the airport by shuttle bus, so naturally we took a taxi.  Costs from the city center will vary depending on the traffic and time of day, but for us, a price of 22€ including tip was a no-brainer.

The Bologna Centrale Railway Station is busy with commuter trains, mid-, and long distance trains all being handled by this one station.  We planned to begin our cycle tour with two days in Ferrara and ending in Bologna so we rented the bikes in Bologna.  Then we went to the train station to buy tickets to Ferrera for us and for our bikes.  When we held two individual tickets for our bicycles we knew we were on the appropriate train.  And, hallelujah, at least half the elevators needed to get to our departure platform worked leaving poor Jamie to carry our bikes and gear up only ONE flight of stairs.

The famous porticos of Bologna have not yet been given the UNESCO World Heritage Site designation.  They’ve been on the temporary list since 2006.  To move things along the City of Bologna is planning to nominate 12 of the most symbolic stretches that fit the selection criteria for “outstanding universal value” and hope to have a final answer from UNESCO in 2021.

Mozart earned a diploma of Master Composer in 1770 from the University of Bologna and in recognition there is a concert hall named Sala Mozart.  The exam required him to create a composition for 4 instruments.  Most candidates took several hours to complete the exam.  Mozart completed it in a half hour and was accepted unanimously by the committee members.

If you’d rather experience history than read about it or listen to a lecture, try the virtual reality museum La Macchina del Temp.  You can interact with the characters and don’t have to put up with the authentic smells.  The cost is 12 to 18€, bookings in advance.

Bologna has leaning towers too.  The Asinelli Tower, built in the 12th century, takes its name from the family that built it and today offers visitors an opportunity to climb 498 steps to the top of its 97.2 meter structure.  (This compares to the Leaning Tower of Pisa which only has 284 steps).  Tickets are time dated and cost 5€ or 3€ for seniors.  The Garisenda Tower began leaning from the beginning, stopping construction.  It was further shortened 12 meters in the 14th century and today is 48 meters tall and is not open to the public.

Bologna had 180 towers in the middle ages but only 24 are standing today.  One of them, the Prendiparti Tower, now houses a very special Bed & Breakfast.  You can also climb to the top of this tower and visit the restored prison cells along the way.  At one time the Prendiparti’s owned a whole block which included two palaces – one old, one new, houses (all with passages to the tower for protection), and another tower.